While Bob Christo has a Brownie

You knew him as the villain’s firangi henchman. But what was he doing before that? You won’t believe it. He tells all in a book he has written 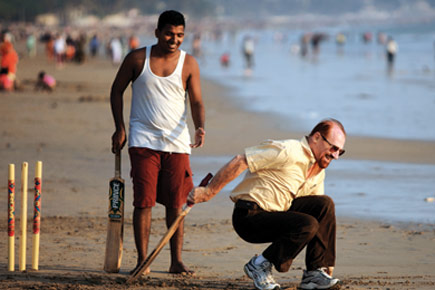 You knew him as the villain’s firangi henchman. But what was he doing before that?


You knew him as the villain’s firangi henchman. But what was he doing before that?

When Bob Christo visited Brio for coffeeand a brownie one morning, he triggered a reaction reserved for a certain kind of fame. This celebrity is neither a superstar nor entirely forgotten. He hovers on the edge of memory, forever linked to a particular time, like a yellowing love letter rediscovered. So, when Christo strolled in, a young man put down his screenplay, and squinted as if to trace a distant thought, and customers turned to look and slowly smile. At the height of Christo’s powers, film-makers asked mostly two things of him—being evil, and laughing evilly. This he did in nearly a hundred movies.

Christo began life in India as Sanjay Khan’s bodyguard, and soon entered Bollywood with Abdullah. Raj N Sippy, who directed him in Mr Bond, says he was struck by Christo’s size. “He looked scary. He was also the only guy around who could pop open a bottle with his thumb.”

Now seventy, Christo gently pressed a fork sideways into what he hoped was a veg brownie—the result of a minor miscommunication with a bewildered waiter—but was, in fact, a fudge brownie. He had kept the beard but was no longer barrel-chested; his legs were thin and ended in white sneakers. Spinal stenosis took hold in 2006, and he could no longer teach yoga in Bangalore. Eventually he concluded that his vastly colourful life needed recounting. “This is my book,” he said, pulling out a flat brown envelope folded into a square. “Every word is on this CD.”

For three hours the story came in disjointed chapters. It was spread over five continents and ten countries, and contained many children.

“I’m an adventurer,” Christo began. After a successful career as a civil engineer in Australia, Christo’s first wife died, and he fell apart. He moved to Vietnam as an engineer.

“All three kids were taken by my friends. But I was in Vietnam, and I wanted to get out before we were shot. When we were evacuated by plane, people clung on to the fuselage, hoping to escape. I had had enough. I moved to Hong Kong.” He visited government auctions and refurbished Jaguars. Here he met a “lovely girl who kept telling me to live in Samoa because her brothers would love me, and I asked her to move in with me”. Christo could not, because of a complicated love at whose centre lay Marie.

Marie Antoinette Francesco. Three decades on, Christo says, he pines for what they shared in the Philippines.

“She calls me one day, saying she is pregnant by me. But I knew marriage would not be possible because I was leaving to locate a top-secret CIA spy ship that had sunk in the Mediterranean.” Suspecting Libya’s hand, Christo and a friend decided they needed money and weapons. So he arranged a meeting with Marie and her childhood sweetheart, and got them married.

He took a breather. Sipped water. Ordered another cappuccino.

In 1987, Christo appeared in the movie of the year, Mr India. Directed by Shekhar Kapur, Christo caricatured himself. Kapur says, “He was strange in the way that he was always drifting. It was a very Australian thing—to travel everywhere and then find a reason to settle down in one place.”

Christo now struggles to recall his travels. After Vietnam, a search for his karate teacher, whom he called Oshiro, led him to the Philippines and then Taiwan. “He was on drugs. The triads wanted to kill him off because he knew that their people had killed Bruce Lee,” says Christo. “I would sit on his shoulders and he would do 1,000 squats a day,” Christo continued. Christo demonstrated squats in the restaurant. “‘Remember how we used to do things?’ I asked him, and he would say ‘Yes Bob!’ Eventually he was okay.”

Then came Rhodesia. The search for guns and money led him to work for Ian Smith, the Prime Minister of Rhodesia, and his work involved sinking Russian ships and ferreting out terrorists.

Sippy doesn’t know about his past, but swears by Christo anyway: “He’s not a bullshitter. He doesn’t add on garbage. He’s a good bloke, an honest guy.” Kapur says he vaguely remembers Christo being with “some kind of armed force”, but can’t recall details.

Christo left Rhodesia after he was paid in Zimbabwean dollars; it was nowhere near enough. He travelled to Muscat for restoration work, and soon arrived in Bombay for a vacation. Here he met Parveen Babi, and worked in films with a dedication his directors found wonderful. He stopped just as suddenly. “After 25 years in the business, I had enough. It was time for a change.”

And so Christo seeks a publisher. He digs deep for memories of his enjoyable life. “Sometimes I forget things,” he says, “But when I’m writing, it all comes back.”