Where Queer is Cool

The Union health minister’s attitude to alternative sexuality is typical of a prejudiced majority. For queer students who suffer alienation or worse, relief comes in the form of a campus network 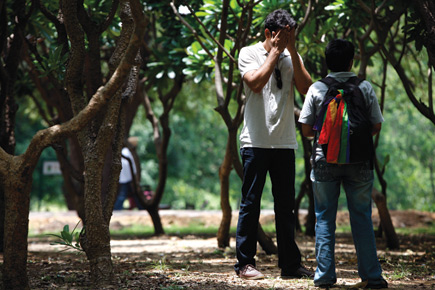 The Union health minister’s attitude to alternative sexuality is typical of a prejudiced majority. For queer students who suffer alienation or worse, relief comes in the form of a campus network


“Till you finish college,” Anuradha told herself on joining an engineering college in Delhi, “forget you are gay.” The two years that followed were hell. Now in her final year, Anuradha looks back and says, “Life doesn’t work that way. You might tell yourself that soon you’ll be this hotshot with a great career and no one will care who the hell you fuck, and in the meantime forget who you are. It just doesn’t work that way.”

It is a wonder, she says, that she was able to pull herself out of depression. “College is supposed to be a happy time. Not for me. The first two years were a time of intense depression.”

To mention her sexuality to friends at college was to risk ridicule. “My college friends talk about their personal lives and relationships all the time. But that is something I cannot do. If I were to talk about my life as a lesbian, it would raise eyebrows. When it comes to same-sex relationships, you often hear jokes. That is the kind of atmosphere you are most likely to find in colleges. It can make you feel extremely awkward and lonely.”

The irony was that she wasn’t alone in her misery. For many lesbian, gay, bisexual and transgender (LGBT or ‘queer’, if you like) students, campus life means enduring a state of siege imposed by lack of acceptance, vulnerability to prejudice and exposure to hostility. And the existence of gay activism in other places is no assurance of relief. “There wasn’t any support space that I could go to,” says Anuradha, “I see gay pride parades and hear about all kinds of events in the city, but I have no access to them because I have to be home by 7 pm, you know. That doesn’t mean I don’t need support.”

Exasperated with her efforts to shroud her sexuality, Anuradha did what most people of her generation do when they want to reach out. With a couple of friends, she set up a Facebook group. A few clicks and introductions later, she had evoked enough interest for a group of students from across various Delhi campuses to meet for coffee. And that was how QueerCampus (QC), an independent queer student and youth collective, came into being. On 18 June, QC turned one. And Anuradha is no longer telling herself to be who she cannot.

Unlike other queer groups in India that have older people who are relatively free to make their own choices, QC focuses on young adults who find it hard to associate with one another, especially students who must abide by all kinds of college and parental rules. “The idea was to create a space accessible to college students who still have curfews, are answerable to parents about where they are going, and have limited money. And within this group, accessible specifically to women, who have a much harder time than men explaining what they’re doing,” says Rahul Sharma, a masters student at Teri (The Energy and Resource Institute) in Delhi, and one of QC’s co-founders.

Socialising is a challenge every gay person faces. “And since this is quite fundamental to someone who is just coming to terms with his or her sexuality,” adds Rahul, “it is essential that a comfortable and easy-to-access support space be created.” At the first few QC meetings, says Anusha, a political science student at JNU, “People would stand up and say things like, ‘I feel alone in the world. I’ve never met another queer person. I am glad to be here.’”

Remarkably, QC meetings are attended not just by English-speaking students of upper-middle-class families, nor just big-city ones. Gaurav, 17, from Bikaner, Rajasthan, found QC through Facebook.  A bright student, he was deputy head boy in class X, but slipped into depression in class XI. “I was battling with my sexuality,” he says, “I couldn’t focus on my studies. I fought with all my friends. I didn’t feel like going to school.”

Gaurav withdrew into himself.  Bizarre reactions from his teachers, labelling him a ‘mental patient’ and asking students to keep away from him, made him wonder whether something was actually wrong with him. “I couldn’t speak my heart out to anyone, and went through a very dark phase. It was a small town. I had no place where I could go and be myself. I would lock myself in my room. Write poems. Watch horror movies. Listen to dark music. That was my life. I had begun to believe there was something wrong with me.”

It took Sambhav, 21, a QC member who befriended Gaurav on Facebook, four months to convince him to attend one of the group’s meetings. “I was scared,” recounts Gaurav, “What if my mom came to know? Even going to a meeting was scary. After four months, I gathered the courage. Sambhav, my friend, told me it was an informal group and they don’t click pictures.”

At his first meeting, Gaurav didn’t say a word. He listened to what others had to say. “Half way through the meeting, I realised I shouldn’t have wasted four months.”

Recently, Gaurav came out to his mother. “One year ago, I wasn’t this comfortable with my sexuality. I have a circle of friends now. It has made my life better. I can’t talk to my friends at college the way I talk to my queer friends. Had I found this space when I was in class XI, I wouldn’t have gone into depression.”

There is no overstating the value of the ‘queer camaraderie’ that a space like QC fosters. For many, it’s their first experience of being understood, perhaps the only forum that lets them find friends whom they can be open and honest with. “This emotional support from people I have found at QC matters a lot to me,” says Sambhav, who works at a bookstore and is pursuing a Bachelors degree through correspondence, “I now have an ever-growing queer family around me, and that has a lot to do with QC. I never imagined that my friends’ circle could be so diverse.”

Several QC members are from medical, engineering and management institutions, which have traditionally lagged law and liberal arts colleges on issues of alternate sexuality. Delhi’s JNU, Delhi University, Hyderabad’s National Academy for Legal Studies and Research and Bangalore’s National Law School now all have queer support cells. “In social sciences, even if there is homophobia, there is classroom teaching on these issues,” says Anusha, who was part of Anjuman, JNU’s campus queer cell, “You are forced to think about inequality. No progressive university syllabus today ignores gender politics.”

But even an ‘enlightened’ campus such as JNU’s had a nasty surprise for Anusha. Her sexuality, she found, was beyond the limits of her hostel roommate’s tolerance. “She asked me if I was a lesbian. It was kind of out-of-the-blue, but since she was asking, I told her I was bisexual. She told me that I had to move out… I didn’t want to judge her rightaway, though. Sometimes, more than regressive attitudes, it is lack of exposure talking.”

When Anusha asked her roommate what her apprehensions were, she spelt some of them out: “I won’t be able to sleep in peace. You might start bringing lovers to the room. I don’t want that.” Her unstated assumption, says Anusha, was that “because of my identity, I would [sexually] harass her—that comes from the idea that I am abnormal in some way.” Anusha decided on principle not to move out. But her stand left her feeling ostracised by the rest of her hostel mates. “That experience taught me that we need a safe space for queer people. If this can happen to someone like me, who is comfortable being queer, I can’t imagine what might happen to people who are not ‘out’ and have to deal with homophobia.”

Finally, it was Anusha’s roommate who moved out. Her new roommate, in contrast, was fairly supportive. Having hostel friends who are friendly, she says, makes all the difference: “At least you have somebody to go to when you are feeling low.”

Queercampus meets twice a month on Saturdays. It also holds movie screenings—in collaboration with Naz Foundation’s Milan centre—once every two weeks. All these are afternoon events, convenient for students to attend.

Encouraged by what QC has come to mean for Delhi’s young alternate-sexuals, especially those who are not very keen on NGO-style overt gay activism, students in cities such as Pune, Mumbai and Bangalore now want to start something similar. Meanwhile, QC is reaching out too. In partnership with Mingle (Mission for Indian Gay and Lesbian Empowerment), for example, it has conducted a campus survey of the undergrad queer experience. Says Rahul, “We wanted to highlight the problems faced by queer students… if and what the causes of depression were, whether campuses were queer-friendly or not, whether they had queer cells or queer groups one could join for support, and so on.”

In small ways, barriers are already breaking down. QueerCampus has straight students too. Ananya Basu, a Masters student of social work at Delhi’s Jamia Millia Islamia, for example, decided to attend a QC event after she saw a notice on Facebook. It was a book-reading session, followed by a discussion on the term ‘queer’. At the end of it, Ananya signed herself up as a volunteer.

“Whenever there is any talk about queer or LGBT rights, everybody in my class is up in arms,” says Ananya of Jamia Millia Islamia, “That made me think about why there was so much hatred and discrimination against queer students. I want to help dispel myths and prejudices against them. QC seemed like the perfect platform for that.”

Ananya believes that as QC reaches out to more campuses, queer students must engage straight students openly. As Anuradha says, QC is not only about helping people of alternative sexuality find confidence, but also about opening up the discussion on sexuality to those beyond the queer community. “Let us start talking about it in a serious way,” she says, “Let us start understanding it instead of joking about it.” Perhaps the Union’s altogether more serious health minister, Ghulam Nabi Azad, will start paying some attention too.