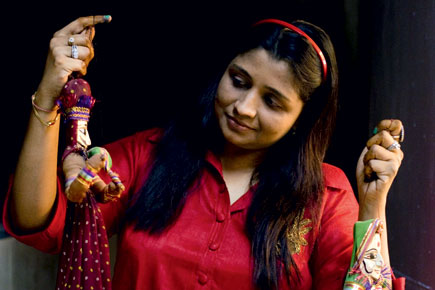 
Priya Shah’s marriage bureau looks straight out of the movies. She sits flanked by talismans, divinities and statues. The most prominent one is a huge Laughing Buddha. On one wall are pictures of her and happily married clients. Next to that, on a table full of astrology books, hangs a pair of Rajasthani bride-and-groom dolls. All this notwithstanding, she refuses to be typecast in the mould of a typical filmi matchmaker. She assures us that she has kept up with the times. It is either that or fold up. Every three months, she holds speed dating events at five-star hotels, so that young people and their families can meet, reject or accept proposals at a go.

Shah is one of the declining few trying to run a brick-and-mortar marriage bureau, a phenomenon under attack by online matrimony. At a time when logging on and finding a partner after browsing millions of entries seems convenient and fuss-free, these marriage bureaus are hanging on to the belief that their “personal attention” and mediation skills still count. As Shah tactlessly says, “I had made a prediction years ago when Shaadi.com popped up that though it was a great idea, it will be full of cheaters and fraudsters in a matter of time. It became a dating site. I have heard stories of people running away with people they have met on these sites.”

The USP of Shah’s service lies in her speed dating events, which she says helps save time. She doesn’t enroll people who are not the following—doctors, engineers, MBAs or non-Hindus. “I can’t help uneducated poor people, as they are not what people want. Women have also become so demanding now. If they have an annual salary package of Rs 15 lakh, they want a guy with a package of Rs 25 lakh.” If you register with her—at a cost of either Rs 15,500 for a year, which doesn’t include the speed dating event, or Rs 33,500, which does include the event—she will do all the groundwork for you. “Identity checks, references and good judgment are my specialities. I make sure the couple’s lifestyle matches. If a girl has a Gucci bag before she got married, she should be able to afford one after marriage,” says she, a happily married Gujarati herself. She says she started the bureau 20 years ago as many of her friends who got married right after college to the first man their parents suggested ended up being unhappy. She insists that much like you need an advocate for legal affairs, you need an expert to help you get married. There must be something to it; she got almost 300 couples married last year. “I make sure all your needs are fulfilled when I suggest a candidate. It’s not about my welfare, but yours. I take responsibility and that’s the biggest thing.”

Personalisation in the age of log-ins is a common refrain (or defence) all marriage bureaus adopt; that a human mediator helps the single find a pre-approved partner who has been subject to an unforgiving, strict, omnipotent eye. But to the youth of today, does the marriage bureau sound as bad as being set up by your grandmother? Anamika Butalia, a writer, says that the concept does seem outdated to her. “I don’t even know what to expect there. Here, on an online portal, I am in control of everything. And I feel that there may be no option to date anyone at a marriage bureau, which is the case with online portals. Yes, it’s great if someone screens candidates for you, as I hate people just calling up without my even knowing them. But I would rather do the screening myself.”

Gitanjali Chandrasekheran, a media professional, feels that going to a marriage bureau could increase pressure on her to tie the knot. “There is too much of the family involved and that increases the pressure. And I think you need to meet the right kind of matchmaker, who understands what you want. And isn’t that hard to find?”

Hitesh Chhabria and his mother Aarti Chhabria, who run Soulmeet, a marriage bureau for Sindhis that has been active for 26 years, are sure they are the kind of matchmakers the world needs. “We want people to get married in an easy, modest manner. We may not be active online, but we have kept up with technology. We make sure that couples chat on BBM or Facebook, as they need to.” They offer services that could be termed familial. They often accompany families and their kids on first meetings to “break the ice”, and even instruct families laden with more money than social skills how to groom themselves. But business is dwindling at Soulmeet. “It’s a world of structured love marriages, so couples themselves choose mates they think tick all the boxes. They don’t need us,” says Hitesh, “But I think singles do need people like us, who can make them understand the important things in life— class, education and a cultured lifestyle. We will help you make an informed choice. We will treat you like our own family.”

Their client Paresh Nagrani, who got married barely eight months ago, was glad for the duo’s help. The real estate professional had tried many marriage portals before he made the move. “I had very specific needs. I wanted a girl around 5 feet 5 inches tall to complement my 5 feet 11 inches frame, but the offers I was getting on websites were from girls who weren’t even 5 feet. There is no filtering process. Hitesh and Aarti had met me, knew what I wanted, and they got me a wife I needed.”

Examples like Paresh’s height-specific matrimony notwithstanding, people who use marriage bureaus are turning into a minority, as online exchanges offer almost everything that brick-and-mortar ones do. A 2011 piece by Fiscal Times, a US-based digital news publication, reported that just as online dating services supplanted traditional offline dating services in the US, so have matrimonial sites turned marriage bureaus in India obsolete. The longstanding US dating service, Great Expectations, now uses the web to harvest prospects and steer them to local, retail franchises. In India, another example holds true.

Astro Vision Malayogam is a chain of marriage bureaus in Kerala founded by a company that specialised in horoscope matching. In the pre-internet years, Malayogam served the role that neighbourhood Pandits traditionally did—of matching people whose horoscopes clicked. Malayogam developed computer software to generate and match horoscopes at its bureaus, which it now licenses to matrimonial sites. An Economist report in 2010 estimated the business these sites generated at anything between $3 billion and $4 billion.

What gives online matrimonial services an edge is the control that the client feels s/he has. For many youngsters, this means not letting their parents influence the search too much. Murugavel Janakiraman, founder and CEO of Bharat Matrimony, says, “[Marriage bureaus] lack choice. The youth today want the best they can get. And at our websites, they have ample choice.” He also points out: “In the world we live in, credibility matters, and it doesn’t come in the form of unorganised, unprofessional marriage bureaus. [Success] depends on brand value.”

However, Monica Shah, who runs a marriage bureau along with her mother Kalpana, says online portals will never really understand the needs of the traditional Indian. “Good families will never go to these websites. They need someone like me to take care of them. The first thing I look at when I go to someone’s home—and I go to everyone’s home—is the nameplate. The boy must own the home… Do these websites offer that kind of attention to detail?”

Falguni Mehta, another matchmaker who has been operating for 21 years and specialises in matches for Gujaratis and Marwaris, also emphasises the need to stay relevant to stay afloat. “Twenty years ago, only families met. Now we insist that couples meet alone. They are the decision makers.” But she is sure she never wants to join hands with online portals. “I don’t want to become ‘generalised’.”

Choosing between the two could be like a toss-up between fast food and a slow-cooked duck. Even in a country forever on the fulcrum between tradition and modernity, it would be hazardous to predict the survival of old-style marriage bureaus 10 years down the line. But then again, as Priya Shah succinctly puts it, “Why would you choose blind love if I can be your eyes?”