HMT set the time for two generations of Indians. We chronicle the death of India’s beloved watchmaker 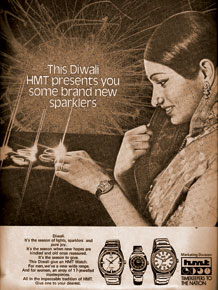 HMT set the time for two generations of Indians. We chronicle the death of India’s beloved watchmaker

Squashed in a grim alley between the inner and outer lanes of Delhi’s Connaught Place—now known as Rajiv Chowk—the only showroom that sells HMT wristwatches in the city is hard to find, unless one asks for directions to a small mobile phone shop next to it. The half-broken ‘B_ackBerry’ billboard on top of the mobile shop’s entrance is evidently a bigger draw than the HMT shop, which looks decidedly dowdy in comparison with the glistening watch showrooms not too far away that display international brands.

This HMT shop was earlier located in the Life Insurance Corp building on Parliament Street, but Hindustan Machine Tools, as the company is called, shifted the showroom to its current location in 2004. It was getting tough to pay the rent, says the storekeeper. That it’s wind-up time for what was once India’s main watchmaker (though HMT also made tractors) is clear at first sight of the shop’s interior. It resembles a storehouse, with cartons and files occupying most of the space, and equipment that’s more than just a little dated. Sales inventory is managed on a clunky old computer with MS DOS as its operating system. Bills and other documents are printed on a noisy dotmatrix printer. Relegated to a corner of the shop are two counters that have watches on display.

It feels like a throwback to another era. Each watch is neatly packed in a transparent plastic cover, and it is the brand’s Janata series that dominates the display panels. One is nudged back to the present by a printout pasted on two walls of the shop, announcing the sale of watches online through the HMT website. This move was made only recently. The ‘Timekeepers to the Nation’, as HMT advertised itself in its heyday, was trying to keep up with the times.

It was just too late. On a recommendation of the Board for Reconstruction of Public Sector Enterprises, the Government decided last week to shut down HMT watches for good. The Bangalore-based company has reportedly been losing money since 2000.

Set up as a state-owned enterprise in 1960, HMT had a success run of three decades, with its watches seen as the touchstone of ‘affordable’ and ‘quality’ well into the late 1980s. It had a near- monopoly of the domestic market, and HMT was the first watch of almost two generations of Indians who came of age in that period. But then came Titan and a surge of fancy foreign brands. The old watchmaker had no chance.

Reports of HMT’s shutdown have triggered a wave of nostalgia among Indians who fondly recall the glory years of the Maruti 800, Bajaj Chetak and Doordarshan. “It was as important and of equal prestige as owning a Maruti 800 in the good old days. HMT is very special,” says Bangalore-based collector Prashant Pandey, 34, who began collecting HMT watches four years ago. His love of the brand was rekindled en route to Bangalore Airport for work-related travel. “I passed by HMT Bhawan in Bangalore on one of my trips and remembered an HMT Janata watch gifted to me by my grandfather [when I was in] school. Wondering whatever happened to HMT, I started visiting showrooms and shops looking for the watches, and now I have a collection,” says Pandey, who runs a blog and a Facebook page for HMT aficionados. With 500 pieces, his collection could well be the largest in private hands. “There is no way to confirm it, as we are still connecting with HMT enthusiasts and there is no formal way of ascertaining it,” he says.

In a blogpost, Delhi-based art critic, writer and curator Johny ML, recounts his journey with artist and friend Shibu Natesan through the city of Thiruvannamalai looking for ‘mechanical HMT watches’. The post, which has been doing the rounds of social media ever since news broke of the brand’s end, begins with childhood stories of collecting packets of Scissors cigarettes to assemble the letters ‘H’, ‘M’ and ‘T’ as part of a promotional drive—whoever could manage to put the name together was promised an HMT watch by the cigarette company. Johny never won the contest, which turned out to be a hoax, but he too remembers his first watch that was gifted to him by his grandfather when he finished school.

“Most of us did get our first HMTs like that—as gifts for good marks or presents from grandparents,” says film cinematographer Hemant Chaturvedi, credited with potboilers like Ishaqzaade and Kurbaan. He is a collector of rare HMT watches and is particularly proud of the three pieces he owns of the rare Jawahar series, launched after the company’s tie-up with the Japanese company Citizen in 1960. His first, too, was gifted by his grandfather for completing school with good marks.

Chaturvedi often sports an HMT- Citizen on his wrist, one of the first editions released after the tie-up. He got it from a rundown shop in Lucknow. “Someone thought I was wearing a classic vintage Omega and I proudly told him that it was actually a Hindustan Machine Tools watch,” he says. Since HMT would always launch watches with Indian sub-brand names like Ajeet, Sona, Kajal, Vijay and Sudeep, he adds, he used to pick them up as gifts for friends with corresponding names. “There was Sudeep; a Vijay and Maurya for a friend called Vijay Maurya; and I managed a Hemant too.” His first buy was in 2006, a 1986 Janata from an old shop in Delhi’s Kalkaji after he realised that he had lost his grandfather’s gift. “I bought it for 300 bucks, that’s all.”

With news of the shutdown, HMT watches are now in demand on the internet as collectibles, with a Janata watch fetching close to Rs 8,000 on such sites as eBay. An original Janata, though, can still be bought from an authorised HMT shop for about Rs 1,200. Other prized watches are of the Pilot series, along with Jawan and Sainik, associated with the Army and designed in keeping with the patriotism associated with the be-Indian-buy-Indian era. “That’s the brilliance of these watches, which make them great collectibles,” says Chaturvedi, “They are easy on the pocket and are vintage.” He cautions collectors against buying them from unauthorised shops, though. “The prices have never been advertised, so no one knows the original prices,” he says.

The brand does not have takers only in India. According to Pandey, there are HMT aficionados in places as far away as Italy, France, Belgium and Australia. “This is because HMT watches are fine machines and it’s the only brand that comes with a guarantee. Even their after- sales service is brilliant,” he says.

The downfall of HMT will remain a classic case study for business schools. It is a textbook story of a public sector enterprise that failed to respond to competition once it was faced with free market forces. In the old days, with imports barred under the protectionist policies of the Indian Government, it thrived. But its monopoly made it complacent. Since it always sold all it could make, it was in a ‘seller’s market’ with no incentive to upgrade technology; and so when Titan launched quartz watches, it was slow in sensing a threat.

“Somehow, the marketing division in HMT figured that quartz watches would not work in India and concentrated on manufacturing its mechanical range,” says Ramanujan Sridhar, who runs a communication consultancy in Bangalore and had worked with Mudra, an ad agency that ran its advertising in the 80s. “Indians who were going to the Gulf to get their watches suddenly found alternatives in Titan, with its elegant range, and HMT failed to see that,” he says. “People could walk in with cut-outs of Titan ads and find beautiful and elegant watches right off the counter.” In contrast, he says, when HMT launched its Roman collection that had roman numerals and was pitched as a ‘masculine’ watch for real men, its distribution system failed the advertising because the product was not even available at its showrooms.

According to Sridhar, Titan was selling watches to a new generation of self- indulgent consumers who did not care about the nation so much anymore. And so HMT’s tagline—which tried to evoke a patriotic spirit—failed to attract buyers. Also, after Titan’s launch, watches underwent an image shift. They were now seen as items of aesthetic value and no longer as sturdy machines that only needed to be dependable as tellers of accurate time. Agrees ad filmmaker Prahlad Kakkar, who directed an iconic ad for HMT starring actor Dilip Tahil. “HMT watches were never beautiful watches,” he says, “It was more a matter of pride to be associated with them.”

Meanwhile, as Chaturvedi brandishes the HMT collection that he has put together over eight years, he has started connecting with other HMT enthusiasts all over the internet. “It is a beautiful discovery, and given the popularity of the brand, maybe its factories won’t shut now,” he says, hoping against hope.