And why, once it’s done, little else matters 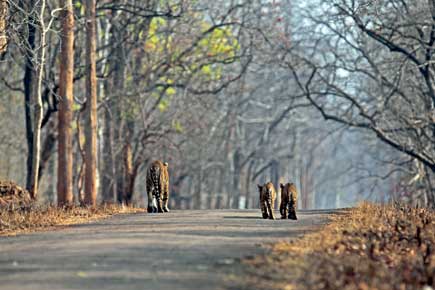 And why, once it’s done, little else matters


It is a 6 am sky with 6 am sounds in Tadoba. It is dark but light is gradually increasing, like in a black-and-white TV when you slowly turn up the brightness. The stridulation of crickets is down a notch, but still audible. At the same time, the rooster has crowed a couple of times. It is a time of transition for the day. In the meantime, a white Maruti Gypsy with a canopy roof rumbles up the driveway for us.

Ranjit, the manager of Svasara Resorts, where I’m staying, wishes us luck. (His surname is not known. Even his card identifies him as just Ranjit.) We hoist ourselves up small ladders near the hind wheel, settle in, and drive off, leaving dust and a waving resort staff in our wake. We are armed with cameras, snacks, drinks and hats. Our goal is to see a tiger.

The Tadoba Andhari Tiger Reserve is 100 km from Nagpur. There are nearly 70 tigers and 24 leopards in the 625 sq metre park. The park also has bear, bison, deer, wild boar and other varieties of animal and plant life.  There are seven entry points, or gates, into the forest. We enter from Kolara, which is just a couple of

kilometres from the resort. At the gate, painted yellow with black stripes, park officials check our permits. There are around two dozen men loitering around, eager to start the day’s work. But there’s the small matter of nature’s call. “Ek ek karke halka ho kar aao,” someone tells them.

Meanwhile, our guide for the safari, Vinod Uikey, climbs into the jeep, sitting to the driver’s left. Uikey is a dark, mild-mannered young man with side-parted hair. He’s been a guide for three years.  He wears an old forest green polo shirt, army fatigue cargo pants and an ‘Om’ bracelet on one of his wrists.

Inside the forest, the fury of Vidarbha’s summer is evident. Almost everything is arid, and, in places, charred. The air, however, is chilly. At least for the first hour or so. The jeep races through the parts where there is no chance of a tiger sighting. The road is unpaved and uneven. It is a mud road. So the vehicle bounces a lot. You have to hold on to the frame of the roof to stay on your seat.

When a tiger’s presence is sensed, the Gypsy stops expertly. Uikey’s eyes and ears are alert all the time.

“We get clues from pugmarks and the sounds other animals make,” Uikey says, “We also keep an eye on waterholes and bear in mind where the tiger was last seen. If a tiger was seen at a particular waterhole at 4 pm the previous day, there is a good chance he will be there at the same time the next day. Tigers are creatures of habit.”

We see fresh pugmarks early enough, barely 45 minutes into the safari. They are near a narrow turnoff to our right. Uikey leans over the edge of the jeep to his left to take a close look at the pugmarks. Worth exploring, he decides. We drive further in. There is a puddle, but no tiger. No sighting.

‘Sighting’ is the key word around which the wildlife business revolves, like a ‘darshan’ at religious destinations. One sighting of a tiger, even a distant one, can make anyone’s day. A safari costs money and time (Rs 3,500 for a private tour, Rs 1,000 per head if you go in a group, and each safari means almost four hours in heat and dust). So the guide feels pressured to deliver. If a tiger is spotted, both he and the guest go back home happy.

Our jeep has five people in it. There is the driver, Uikey and me. There is Satyadeva P Sinha, the elderly proprietor of Svasara Resorts. Sinha is also Group Chairman, Jenson & Nicholson, Kalyanpur Cements and Bihar Hotels. The fifth person is Sinha’s valet, a middle-aged man with chocolate brown skin and a stark white stubble who is silent the entire safari.

Sinha seems addicted to two things. Rajnigandha pan masala, topped up with zarda, and wildlife. Even at his advanced age, he is up for two bone-rattling safaris a day. When the mood strikes, he flies in to Tadoba from Patna, where he lives, stays a couple of days, spends most of his time in the jungle, and leaves.

Bald, deep-voiced and roly-poly, he reminds you of the actor Zlatko Buric, who plays Yuri Karpov, the corrupt Russian billionaire in the film 2012. “Goood. That is good,” is one of Karpov’s standard lines in the movie.

For us, however, it’s not looking that good. Nearly two hours of hopping around the jeep has brought us some interesting sights—a colossal sambar deer peering at us from behind tall grass, deer locking their antlers, creating a sound like that of clashing hockey sticks, frizzy-haired wild boar scuttling across the path, battalions of langurs with their long tails coiled up. But we haven’t seen a tiger.

Okay, let’s check out Bowdi No 1 again, decides the brains trust in the jeep. Bowdi No 1 is a landmark spot with strong chances of spotting a tiger. It is a clearing in the jungle with a pond and a towering, barren tree with giant honeycombs hanging down from bare branches. We have made a couple of sorties to Bowdi No 1 before, and now at 8.30 am, we make one more. There is a huge stakeout—nearly 20 vehicles, their wheels caked in dust, their occupants in a state of excitement or fatigue. As our jeep stops, the driver says the magic word: “tiger.” A muted rush of activity ensues. People who have been sitting stand. Some take their cameras and binoculars out. I can’t help but notice the bright blue Chelsea football club shirt of one man. It is a ridiculous choice of attire for a wildlife safari.

The tiger is some 100 yards out in the front. It is walking amidst dry grass in our direction. It seems relaxed. Its walk is devoid of hurry or specific purpose. It takes a left turn and disappears in the grass. The humans are disappointed. But after a few minutes, the big cat re-emerges. Not only that, it grants its audience its wish by stepping out on to the slope of a bank of the lagoon. Now it’s completely in the clear, you see. Later, over lunch, Sinha tells me that this is the reason Tadoba is a popular park among photographers. “This is a sparse jungle. You go to Kanha or Jim Corbett, it’s a thick jungle.”

We are in the tiger’s domain. It can do what it wants. It can swim in the pool. It can roar. It can charge towards us, or say, ‘Shakti Kapoor should become prime minister. Aaooo.’ Who can stop it? But all it wants to do is lie down in the shade on the bank. It does, on its right flank. So now we see its hind legs, bum and tail. Once in a while, it raises its big head, looks in our direction and puts its head down again. The sight of 20 cars full of stupid humans, one of them in a blue Chelsea shirt, is not worth sacrificing its snooze for.

The thrill of watching a tiger from a distance is comparable to witnessing astronomical phenomena. What is happening is happening far away, but you know it’s special. It’d be more special, however, if the tiger gave us a bit of a show. Afterwards, something happens that raises possibilities. On the other side of the pond is dry grass, and beyond it an open field. A flock of deer arrives at the edge of the field. The deer want to cross the field, but are aware of the danger. So before making a dash for it, the deer stop and look. We want the tiger to see his chance. Our eyes dart left to see the deer, then right to see if the tiger is doing something. “Come on,” we privately exhort the tiger. It’s a bit like the scene in Sholay where Jai and Veeru urge Thakur to pick up the gun lying at his feet. Thakur doesn’t—because he doesn’t have hands. In this case, the tiger doesn’t go for the kill because it’s not interested. Not at this point at least.

Nonetheless, thankful that we got half an hour’s sighting, we turn back. A weight has lifted off Uikey’s shoulders, and mine too. I have something to write about. Sinha must be happy as well. Many of his guests have had sightings. There is an old couple from Nuremberg, Germany—Manfred and Dorothy Rosler. They’ve made four safaris and have had three sightings, once of a mother and four cubs. When asked to compare Tadoba with other wildlife experiences they might have had, Manfred says, “You can’t compare. [But] this is a very good place.”

I head towards my room to pack my bag for the return home. Manager Ranjit, however, has one more thing to say before we part company. He wants to bring to my attention the bureaucracy the resort faces while arranging permits for guests. The permits have to be fetched from the forest authorities 120 km away in Chandrapur. This places a huge, needless logistical burden on them. “It would be convenient if the permits are available online or at the nearest gate,” Ranjit says.

It is early afternoon now and the sun is so fierce you can almost hear the earth hiss and sizzle. As I proceed to the taxi that will take me to the airport, I see a Maruti Gypsy about to leave. Manfred and Dorothy Rosler are sitting inside, ready for another exploration of a jungle they’ve come to love.