The Menace of Grandparents

What do new parents do when their parents start feeding the baby junk food and homeopathy pills? 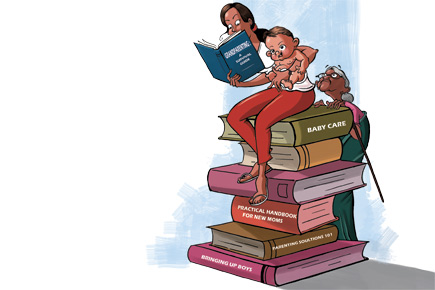 What do new parents do when their parents start feeding the baby junk food and homeopathy pills?


Months before their first baby was due, Aravindh Ramachandran, a Tamilian, and his pregnant wife, from Andhra, talked about the parenting challenges that lay ahead. They first addressed the space between their cultures; a gap fertile for conflict. So they planned an approach both of them were happy with toward religious and cultural ceremonies, and what to feed the baby.

Prepared as they were, they didn’t factor in one crucial detail: grandparents.

“My wife and I knew what we would name our baby if we had a boy,” Aravindh says. “But our parents were reasonably surprised that we named the kid immediately… you usually name a child after 11 days.” Their parents let the transgression slide, and then began offering advice. They meant well, but the advice conflicted with what the parents wanted. “There’s always input of some kind or another,” Aravindh says. “They put an anklet on him. We were like, ‘get it off!’”

There’s no shortage of guides with advice on planned parenthood. Few, if any, offer suggestions on coping with new grandparents. And so, both sides (and yes, you’re either with them or against them) go gently into battle armed with their experiences, their parenting books, and all the skills of diplomacy they can muster. No wonder. The guides that do exist (and there are far too few of them) have names like Grandparenting: A Survival Guide, Walking on Eggshells, and 101 Ways to Spoil Your Grandchildren.

Conflict isn’t always overt. It floats beneath the surface of everyday civility, showing itself in strange ways. A journalist-book author who does not want to be identified says that he noticed his mother-in-law, who stayed over for a couple of months each year, popping homeopathic medicines into his daughter’s mouth regularly. “It was like a pat on the back. If you blinked, you would miss it. She would walk by my daughter, ask her to open her mouth and swallow it, and carry on like nothing happened.” This alarmed him, for his belief in science and healthy living was absolute (“The idea of a bottle of Pepsi in my fridge is alien to me”), but he found direct confrontation inconvenient. When his mother-in-law was not around her room, he smuggled out the bottle of pills and tossed them away. Since then, he has kept up the practice. It doesn’t end there. His mother-in-law likes late evening soaps and spends hours watching them. Unfortunately, his daughter, who was otherwise uninterested in TV, started liking the same shows and sat beside her grandmother to watch them. The writer, exasperated by this, decided to not fill his satellite TV account with credit, and asked the company’s representatives to stop calling him with payment reminders. When she saw only television static, he feigned “cable problems” and “server trouble”. This continued until she asked him point-blank: “It’s strange. Are you not crediting your account?” The writer could not lie.

A few of the people who agreed to discuss their experiences for this story said that they got along fine with their parents, and mentioned ‘drawing the line’. “When we had our first child,” says Amit Akali, a national creative director at Grey Advertising, “we listened to everybody. But then it became a lot of ‘give him water’ and ‘don’t give him water’ when he cried, so we just put our foot down and overruled everyone else.” Akali and his wife, Dilshad, decided to let themselves be guided by a capable paediatrician, and use the doctor’s advice as a start.

Ramachandran also decided he would trust modern medicine. Believing in the alternatives was something he couldn’t bring himself to do. “Our baby was colicky for the first three months,” he says. “Not one person who saw the baby in the first three months did not have advice.” The parents were advised to feed the baby infant formula, a food they had consciously decided to keep out of the child’s diet. But he found that his parents wanted to wing it with the baby’s diet. “We found it almost casual, almost lackadaisical.” Whenever he talked about what the books said, or what the doctor recommended, “they would get dismissive. I used to get really pissed off. The books help. I know they do. Say the kid is not sleeping. They ask you to check: is he hungry? Wet? Is the room hot? Cold? They tell you that if you rub them on the head, they fall asleep. When you have all this, shouldn’t you even consider it? They get defensive. ‘Oh, it’s all new-fangled rubbish’,” he mimics, “‘We didn’t have books and you turned out fine!’”

Rajvi Shah, an advertising sales professional who left a coveted job at Conde Nast to focus on becoming a parent, seemed casual about her good fortune. She found there was nothing to resolve because she and her family were on the same page.  “Whatever they tell you, you listen,” she says. “How can you not? I can’t argue with them.” She feels this way because her mother was her gynaecologist, her sister was her sonologist, and her father was her paediatrician. Two days after she gave birth, her son developed an eye infection. She visited her brother-in-law, an ophthalmologist. “There’s nothing to argue about,” she insists.

“We boil his bath water,” Ramachandran says. “Our parents think we’re nuts. But if you throw information at them, they throw experience back at you.” He reasons that because of greater access to books and information online, “New-generation parents are more militant about doing things by the book.”

Tradition is one of the biggest hurdles between grandparents and new parents. A number of grandparents say they are flummoxed by how little their own experiences were tapped by their children. “We didn’t have these books,” one says. “Now it’s all don’t give them this, don’t give them that. They’re going a little overboard.” As he nibbled on his biscuit, his grand-daughter saw the snack and toddled towards him unsteadily. “Num num,” she said, looking at the biscuit. “Num num.” He looked at her and then at his daughter-in-law. “Don’t give it to her,” the mother said, “It has too much salt.” She called out to distract the baby.

“Don’t deny her food that she likes,” he said. “She’s becoming weak. Look at how she’s looking at it.” He held it up like bait. “Sorry. Your mother won’t let me feed you this. What can I do?” With a dramatic flourish, he added, “Wait till you’re older. Then I’ll give you everything your parents are denying you.”