It was an Anglo-Indian project of joyous determination. Today, it’s a picture of desolation with little of the festive spirit that once kindled so brightly. 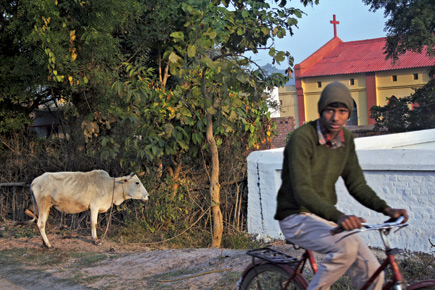 Once an Anglo-Indian project of joyous determination, McCluskiegunge is now a picture of desolation.

Malaysian songwriter Zee Avi may well have penned these lines for McCluskiegunge, an idyllic settlement of Anglo-Indians 65 km northwest of Jharkhand’s capital Ranchi. Christmas at this picturesque small town, set amidst the rolling hills of the Chhota Nagpur plateau, was once about plum puddings, roasted turkey, midnight mass, visiting Santa and all the rest. This year, there isn’t even a Christmas tree in sight at McCluskiegunge, and no bright lights herald the advent of Yuletide at the two quaint little churches here. For, there are barely any Anglo-Indians left at McCluskiegunge, and the ones who cling on to the fast-fading memories of the glorious days gone by are in no mood to celebrate. The memories are too painful and their bones too weak and tired. “A town of dying Anglos,” as one of them puts it starkly, McCluskiegunge’s surviving handful have lost their famed joie de vivre and seem to be simply marking time, awaiting their last Christmas. For some, this could well be it.

Brian Mendies, 71, isn’t celebrating Christmas. He’s in mourning. Having buried his daughter Sharon at the local Anglican cemetery earlier last month—and his wife Enid two years ago and son Leslie 13 winters ago—Brian’s solitary life in a one-bedroom house beside a grand old bungalow that was once his home (sold, since) is too full of painful memories. “Christmas used to be a grand affair. Celebrations, baking cakes, playing Santa, wrapping gifts, decorating Christmas trees, wine, delicious food, the works. There used to be dances at clubs and glorious parties at beautiful houses. Life was fun. There was music in everybody’s lives. All that’s gone and will never come back,” the former Indian Air Force engineer tells Open. He had served all over the country before retiring to this place, one of the few from this town to have done so. Most have settled elsewhere, even migrated to Australia, Canada, USA or the UK.

At 84, Florence Goss is McCluskiegunge’s oldest Anglo-Indian. She keeps away from the festival as a matter of principle. “Celebrating Christmas is a pagan ritual. There’s no question of me doing anything special on Christmas,” she says in a bitter voice, a sign perhaps of her forlorn life in the crumbling ruins of what was once a grand bungalow set amidst 30 acres of orchards and gardens. McCluskiegunge today is a terrible letdown for anyone who remembers the old days. Today, Goss is a forceful advocate for Jehovah’s Witnesses and seen as an oddball by most.

Dennis Meredith doesn’t celebrate Christmas either—because he doesn’t believe 25 December is the day Jesus Christ was born. “We all know that, but we pretend this is His birthday. Why fool ourselves and indulge in fake celebrations?” he asks. Dennis, 59, a widower, lives in a once picturesque, ivy-covered cottage in the middle of an untended garden overgrown with shrubs and bushes with his daughter Karen. An engineer, he worked with various engineering firms across India and the Middle East before returning in 1953 to McCluskiegunge to spend his last years in peace. The merriment is long gone.

Noel Gordon, 65, also finds it impossible to ring in the Christmas cheer the way he once used to. A debilitating stroke has left him paralysed on the right. Though, to be fair, it hasn’t dampened his spirits. Still, he can’t play Santa anymore or take the lead in the church choir. Not that there’s any choir left to speak of. In fact, none of the six Anglo-Indian families affiliated to the Anglican Church even attend Sunday services. Ditto for Roman Catholics. Thus, in these churches that used to reverberate joyously to carols, the perfunctory Hindi service (for Adivasi converts, the mainstay of their congregations now) speaks loudly of the town’s transformation.

Christmas today is not even a pale shadow of the magnificent revelry, and devotion, of yesteryears. More than the sadness that overwhelms the surviving dozen-odd Anglo-Indian families, it is the deep sense of regret over what could have been, that gnaws at their hearts. It was a grand dream they once nourished, a dream akin to that of Israel. It’s outlined in the October 1940 issue of the quarterly journal of the Colonisation Society of India started in 1933 by Ernest T McCluskie: ‘We see in McCluskiegunge the beginnings of what the Moslems call Pakistan but what we call Anglo-India. A place in India where we can foregather and mix freely… where we gain the respect and confidence of all other communities of India.’

McCluskie, a wealthy businessman, formed the Society in 1933, sold shares and debentures to other Anglo-Indians, and, with the money raised, bought 10,000 acres of mainly forested land on permanent lease from the local chieftain to set up this colony in 1934. Agricultural farms, orchards and colonial bungalows came up on large tracts of land. The agricultural plots were sold for Rs 50 an acre and the residential plots for five times that sum. There was even an easy installment scheme. “The early settlers were hardworking and toiled to turn the land into farms where all sorts of fruits, vegetables, nuts and spices were cultivated,” recalls Noel. The 1940 journal holds up the ‘hard work and perseverance’ of one EJ Copcutt who grew two-dozen varieties of fruits and vegetables as well as paddy, ran a poultry and dairy farm, while his wife baked cakes and pastries and made jams jellies and marmalades that were sold not only in the local market, but sent to Calcutta as well, as an inspiring example for the settlers.

The founders of the Society envisioned McCluskiegunge as a colony of enterprising, honest and hearty Anglo-Indians, a self-sufficient and self-run community. McCluskie and his co-founders knew of the hardships ahead, though. ‘McCluskiegunge is not for you nor for me, nor for our children perhaps, but for the later generations of Anglo-Indians who will rise as a new race in Mother India, proud of our origin, proud of our efforts to save them from submersion and from annihilation, proud in their youth and their strength of arm and brain, leaders of a new nation that is in the making today in our home and mooluk, McCluskiegunge,’ wrote McCluskie.

For a few decades, till the late 1960s, McCluskie’s dream seemed to be more or less on track. Educational institutions, a hospital and other facilities came up, an elected Colony Committee took care of building roads, settling disputes and administering McCluskiegunge. Various businesses emerged, ranging from confectioneries, radio and gramophone repair shops and dress-makers to money-changers, tile-makers, oil mills and transport services. Many ran successful farms, poultries and dairies whose produce used to be sold in Calcutta. There were a couple of clubs, some private boarding houses and local fairs aplenty: the May Queen and New Year’s Balls and even a lovers’ rendezvous (as Norman remembers, an unfinished bungalow called ‘Remer’s Folly’ after the man who abandoned it midway on account of faulty design).

In short, McCluskiegunge was a dream taking purposeful shape, a unique enclave of Anglo-Indians—till fate and complicated circumstances intervened to turn this town into a graveyard of dilapidated bungalows that are left as decaying symbols of McCluskie’s bold attempt to safeguard his community from what he saw as an inevitable ‘submersion and annihilation’.

Or perhaps, it is this Christmas being a non-event that is more symbolic of the aching loneliness in the air. There are no McCluskies, Camerons, Perkins and De Rozarios around anymore. It’s a saddening sight. Zee Avi’s words come echoing through the desolation, a cry as plaintive as ever, calling out to the Anglo-Indian diaspora… Christmas won’t be Christmas without you.