A day with a group of stammerers 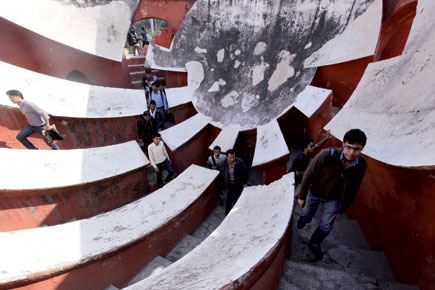 A day with a group of stammerers


Late one Saturday afternoon in Delhi, youngsters in pairs roam around Jantar Mantar, accosting strangers with an unusual request. They move from group to group, asking “Can I have a conversation with you?” When Parmendra Singh Bundela and Sanchit Gupta approach people, some refuse point blank, some laugh loudly and ask them to fuck off, and some don’t even respond. Occasionally, a few agree to speak to them. So, stuttering and fumbling over words, glancing at a chit of paper with prepared questions, or jogging their memory for queries, the duo attempt a conversation.

Bundela and Gupta are stammerers. They are members of the Delhi chapter of a self-help group of stammerers called The Indian Stammer- ing Association (TISA). The group itself, ever since its inception as an internet chat group, has come to form the bedrock of support for stammerers in the country. Every evening, members of this group across the country log onto the internet for a Skype conference call. On weekends, local members meet at a public park for several activities. Creating a large circle, even as curious onlookers gather, they bounce or repeat the first syllable of particular words, call out one anothers’ names in conscious stutters, and force out words with the air of their exhalation. And when they don’t practise these speech exercises, and if there is enough of an audience around, they stand on a raised platform to deliver speeches about ‘My Stammering’.

Today’s exercise of TISA’s Delhi chapter involves speaking with strangers. Bundela and Gupta prove unsuccessful at first. They are turned down repeatedly. On one occasion, a young man cuts them short with a brusque ‘no’ in what he seems to consider a heroic act, even as his female companions titter. Others decline in varied ways. And so it goes, until a solitary old man who admits he has nothing else to do agrees to a chat. “Ah, well, I might as well listen to you guys,” he says in mock condescension.

Elsewhere in the park, some stammerers find that the youngster they have asked is enthusiastic, but as a medical student who takes the liberty of examining their tongues and offering a diagnosis: their ‘weak tongues’ are at fault. Another pair meets an individual who puts their stutters down to the karma of their past lives. In another corner of the park, when a TISA member explains to an American tourist that they are members of The Indian Stammering Association, the tourist calls out to his partner, saying, “Honey, we have some Indian astronomers here.”

After the session, each member is asked to deliver a speech on a subject of his choice. Some offer reviews of the last films they watched, some deliver poems they wrote, and some are so afraid of fumbling that they read out forwarded jokes on their cellphones. The speeches take so long that even a bunch of schoolgoers who are amusing themselves by imitating them get bored and leave.

The association was started online by Dr Satyendra Srivastava in 2006. It was while blogging about overcoming his stutter that Dr Srivastava—who signs his emails as ‘Sssachin’—thought of forming a an internet club of stutterers for them to help one another. Within two years of setting up a chat group, 99 stutterers from various parts of the country gathered in Mumbai for their first- ever meet. After that, offline chapters of the group started coming up in various other cities. There are currently over 1,000 TISA members, he says, although not all of them meet regularly.

Dr Srivastava’s own story of speech recovery is remarkable. Once a severe stutterer who would resort to ‘covert stuttering’ (he would mentally ‘scan’ his speech ahead, switching difficult words, reorganising syntax, anticipating reactions and preparing his response), he is so confident and able a speaker now that his stammer is hard to notice. “It is all about accepting yourself and your stammer,” he says. “Once you accept that you stammer and realise there is no harm in it, it helps.”

In his early life, Dr Srivastava would hide his stammer, and quite well too, but he was painfully conscious of being found out, and his habit of pre-scanning his speech was exhausting. Years of research, meditation, and correspondence with international support groups led him to understand that stuttering cannot be ‘cured’, and that one has to accept it as just another aspect of oneself.

Dr Srivastava has come to be hailed as a messiah among stammerers in India. Every few months, stutterers visit him at his home in Herbertpur, a small town near Dehradun in Uttarakhand, and he helps them free of cost. Over the years, as Dr Srivastava’s residence got more and more calls from those in need of help, his wife too learnt that complete silence at the other end was not necessarily a prank call. Some can’t even get their first word out.

Harpreet Singh Arora, a Mumbai businessman’s son whose search for a cure led him from a speech therapist who would massage his tongue with groundnut oil to strengthen it to a hypnotist who tried to uncover his past-life traumas, speaks of his three weeks at Herbertpur as a life- altering experience.

Therapy usually begins with a shift in attitude. Bundela remembers that for his first two days at Herbertpur, Dr Srivastava took him to a hospital and asked him to spend the rest of the day greeting strangers and asking them to discuss stammering with him. “I initially remember thinking, ‘I’ve come all the way for this?’ People would shoo me away, but some would agree. I realised that stuttering was an aspect of my nature and I needn’t be embarrassed of it.”

When Bundela was a young boy in Jhansi, he sought fluency of speech by consuming around a dozen green chillies everyday to toughen his tongue. This was his grandmother’s prescription, and when it failed, she replaced it with spoonfuls of sugar. During his college days, he would wake up at 3 am and climb his hostel roof with pillows under his arms to prepare for class presentations. “And there, on a cold dark night, when everyone else was fast asleep,” he says, “I would stand up on the roof delivering my presentation to an audience of pillows.” Otherwise a bright student, Bundela never appeared for any campus placement interview after his BTech degree. Instead, he took up the job of a research associate in Indore’s Bhabha Atomic Research Centre. It was a job, he hoped, that would keep the need of conversation to a minimum. Since Bundela joined TISA over a year ago, he no longer lets his stammer rule his choices. Not only has he quit his job at BARC and moved to Delhi to open an e-commerce portal with another member (playfully named Ssstore.in), he also helps other TISA members come to grips with their stutter.

At Jantar Mantar, Abhisek Verma, another member of the group, gets stuck midway as he recounts his first stutter. As a class 2 student, he was playing the lead role in a skit, but at a rehearsal just hours before he was to appear on stage, his teacher found that he could not utter a single word without stammering. The play was cancelled. As he tells the story, he gets stuck over a particular word. His lower jaw trembles and his facial muscles contort in an effort to speak. Nothing emerges. He looks miserable, but Bundela stops anyone trying to fill in; instead, putting his right arm around Verma, he tells him to take a breath and complete his sentence.

Some, like Jitendra Gupta, have devised their own ways to deal with their stutter. Whenever he needs to speak, the 20-year-old engineering student tilts his head lower, and with pouting lips, almost whistles his sentences out. His most difficult words are those that start with the letter ‘J’, so he often introduces himself as ‘Raj’. Among other measures, he does his utmost to avoid “high pressure” situations. Rather than having to cite a Metro destination at a ticket counter with an impatient queue behind him, he buys a swipe card loaded with enough value to last a whole year. Until sometime ago, he did not even have a cellphone.

They have fun too. Once, around 15 of them formed a single queue to purchase tickets at the Rajiv Chowk Metro station. “While the queues at other counters were getting done quickly, this particular queue was not even half way through,” recalls Verma, “When around five were through, and the sixth one also turned out to be a stutterer, the ticket seller just left the counter in anger.”

Ravi Prajapati, who has the reputation of being the group’s funnyman, has other such stories to tell. For a tailor’s son who was almost pushed to suicide by his social rejection and failure to find a job, he has come a long way. Earlier this year, when he joined TISA and attended its national conference in Bangalore (with some 60 stammerers in attendance), he learnt that he needed to speak to strangers to gain confidence. So he spent his entire return journey—aboard a Bangalore-Delhi train—walking from compartment to compartment, talking to any stranger he could find who was not asleep.

As Dr Srivatsava says, a stammerer’s low self-esteem is worsened by subjection to ridicule. At Jantar Mantar, TISA members complain of how they are mocked at work or college, even as schoolchildren follow them around imitating their stutter.

What’s needed is sensitivity. In 2010, tired of Bollywood films that portray stutterers as either psychotic murderers (Shah Rukh Khan in Darr and Baazigar) or bumbling idiots (Shreyas Talpade in Golmaal 3), Dr Srivastava filed a public interest litigation in the Uttarkhand High Court against Golmaal 3. The case is currently underway.

As the day draws to an end and members decide to head home, Prajapati stops everyone with the lure of a joke. Wearing an orange badge with the monogram ‘If you stutter you are not alone’, he says, “Two men called Ghaseeta Ram meet each other one day. One is a stutterer and the other is not. The stutterer stammers as he introduces his name. When the other’s turn comes, he says, ‘Mera naam bhi Ghaseeta Ram hai, lekin mein itna ghaseet-ta nahin hoon’. (My name is also Ghaseeta Ram, but I don’t drag my name so much.)” While Prajapati delivers the joke, he stutters and stumbles over it, and the punchline is so long drawn out that the joke loses its punch. But the group erupts in such peals of laughter that you know that to them this is no ordinary joke.