The canine existence today is incomplete without psychologists, cardiologists, hotels and mutton botis 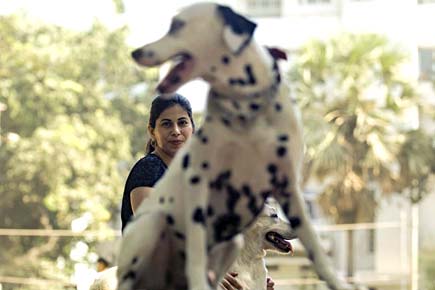 The canine existence today is incomplete without psychologists, cardiologists, hotels and mutton botis


It’s been 14,000 years since we began fiddling with wolves. Domesticating them, messing with their anatomy to create more than a thousand dog breeds with droopy ears, sausage torsos and otter tails, that don’t even look like wolves. Soft science dubs this ‘infantilising’, hard science calls it ‘neoteny’. Whatever. After playing Darwin for centuries, we’re now playing Freud.

Beyond primping, we’re trying to get into their minds through doggie shrinks. We’re listening to their hearts for worrisome murmurs, as canine cardiologists do in Mumbai. Into their ears, they’re playing concertos by Beethoven, adapted for stressed urban canines at a dog-o-tel in Gurgaon. We’ve even persuaded human homeopaths to treat pets. To reverse potentially fatal kidney trouble, now you can dial a healing organic meat loaf with vitamin supplements.

All this, because dogs have the shortest life span in the family. Says canine cardiologist Dr Sangeeta Vengsarkar Shah: “Offices and schools don’t give you 13 days to grieve.” Pet lovers, meet the canine specialists who’ve got what it takes to reach the inner dog in your pet.

OFF THE WALL, OFF THE COUCH

From a snarling P3 pooch possessive about his caviar, a bozo boxer who leaps off the balcony, to a canine torn by a custody war between lesbian lovers, doggie-shrink Shirin Merchant has seen dogs at their whiniest worst. After 16 years of canine counselling, Shirin says 85 per cent of their problems are caused by, ahem, us bipeds.

Trouble begins when people don’t research Canis familiaris domesticus and adopt aggressive breeds like mastiffs or dobermans as pets. They can’t turn into cute lapdogs. After creating energetic work dogs descended from wolves, such as bird-hunting spaniels, we’ve forced them to hang around our homes: bored and jobless. Wolves and dogs still share near identical DNA. Yet who among us realises that we’re sleeping with a frisky wolf sprawling on our bed?

When puppies display aggression and separation anxiety, Shirin, who’s trained with famed dog-behaviourist John Rogerson, gets frantic phone calls. “Behavioural disorders can’t be fixed by trainers,” asserts Shirin, “they beat dogs into submission.” A typical session begins when the counsellor, carers and canine meet on the dog’s home turf. “We don’t put a dog on the couch. We talk and observe till we have an aha moment,” she says. Brandy, a boxer, wouldn’t let her owner out of the house. Though Brandy was good natured, the issue was a meek owner. Shirin had the owner establish control by entering and exiting the door repeatedly. The tussle is inter-species, between human karma and doggie dharma.

It’s a drastic day when a doctor has to treat a new mammalian species. Many years ago a lady landed up at Dr Butail’s clinic in Delhi carrying a tumourous poodle in her arms. “Tashi had fever, septicaemia and open wounds,” says the homeopath. Based on a blood count, Dr Butail began treatment. Within days, she says, the potent white pills had helped Tashi survive cancer.

Since then Dr Butail’s airy clinic has had all sorts of quadrupeds coming round to be cured. Pugs with coughs. Boxers with diarrhoea. Even daschunds with false pregnancies. Kidney disorders have high prevalence. Tendonitis, a common problem that manifests as a limp, doesn’t show up on x-rays. Allopathic painkillers provide temporary respite, only homeopathy—an energy therapy—brings lasting relief.

With the 12 tissue salts from Ferrum phos to Kali mur declared dog-suitable, remedies are a sweet swallow. Rather than the upsetting wrangle outside the regular vet, where dogs, terrified by memories of rectal thermometers and probes, have to be dragged in on a leash, here, even hypochondriacal German shepherds wander in calmly. Even the homeopath prefers dogs. She says, “It’s easier to regulate their dosage and diet. They’re fantastic patients.”

THEY CALL US DR DOG

They don’t wear white coats, nor do they have stethoscopes slung around their necks. When the Dr Dog Squad sets out on rounds, the only examination they subject human patients to is a warm paw and gentle nuzzle. Yet, without prescribing any pills, a loving lick from these ‘thera-pets’ can lift anyone’s sagging spirits, speed up recoveries and even get the silent to speak.

Connecting children, adults and seniors with the healing power of pets, the Mumbai-based Animal Angels Foundation, set up by Rohini Fernandes and Radhika Nair four years ago, has 20 canine therapists on its panel. As clinical psychologists, when Rohini and Radhika realised pet remedies had dimensions beyond ordinary counselling, they studied animal assisted therapy in America. On their return, they began training labradors, great danes and stray puppies, to develop their sixth animal sense for human relief.

Like Caesar, their four-year-old therapist, all dogs who’ve passed the temperament test regularly visit schools, special needs centres and senior citizen homes to help people recover daily life skills. This includes Sheela, an eight-year-old with autism, whose attention span and concentration improved after 12 Caesar sessions. Besides becoming happier, Sheela has begun to coax this yellow fellow to play by uttering ‘come’ and ‘ball’. “Initially, institutes were apprehensive, they said if human therapists can’t produce much change, what can animals do?” recalls Rohini. Only after a trail when positive changes became visible to the staff and parents did the pets get the go-ahead to practice therapy. Success hasn’t showered dog-docs with privileges like personal cars with red crosses on windshields. But they do get a conveyance allowance for AC-taxis so they turn up for work bright-eyed and bouncy.

Who’d believe that our seemingly born happy slumberers could be prone to cardiac illness? “Dog’s heart disease entities are different from humans,” says Dr Shah. Unable to help themselves to chips and pizzas, they don’t have arteriosclerosis or blockages, but 70 per cent of dogs above 7 suffer from cardiomyopathy (heart muscle disease) and valve trouble.

The first signs of concern are shortness of breath, laziness and an inability to sleep at night. After 20 years of listening to canid hearts, Dr Shah can easily “hear the difference between a click, murmur and gallop”. To diagnose the exact condition, this doc with a canine-cardiac-PhD examines 20 patients a month using a stethoscope, x-ray and 2/4 dimensional echo. The doppler is vital for diagnosing valvular disease. Breaking bad news to owners is the hardest part: “Thankfully, most dogs respond to medical management.”

Like our cardios, her advice is similar (exercise, restrict salt) with one major difference. Dr Shah says: “Give dogs red meat; they need carnitine, an amino acid.” Pet wellness doesn’t start at a spa but with juicy mutton botis.

ALL BACH, NO BITE

Green grass, blue skies and dogs romping about, everything looks dreamlike at Kennel One, a dog-o-tel in Gurgaon. Except for the bizarre music spouting from outdoor speakers—Beethoven’s sonatas and Rachmaninoff’s operas, originally composed for tenors and the grand opera houses of Europe. Why are dalmatians, labs and pariahs listening to Euro-Russian concertos in farmhouses normally ruled by balle-balle beats?

“Pets today suffer from a lack of space, time and understanding from their owners,” says Deepak Ghosh, manager, Kennel One. This stress manifests itself in bad behaviour such as biting, incessant barking and aggression. Leaving dogs free to romp was one way of relieving canine anxiety, until they stumbled upon Through a Dog’s Ear, a music series by psycho-acoustic expert Joshua Leeds and veterinary neurologist Susan Wagner. Research has revealed how classical music reduces agitation, elevates mood and lowers pet stress. Conversely, heavy metal has the opposite effect. Metallica makes Snoopy snarky.