The Girl Who Dared

A Kashmiri who fell in love with a Jammu businessman across the religious divide seeks justice after he was killed by the police in Srinagar. 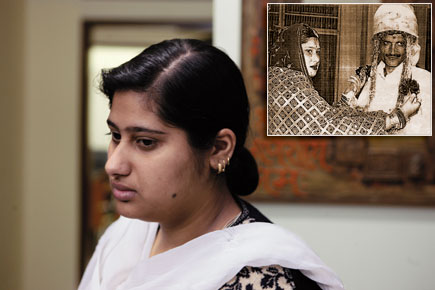 A Kashmiri who fell in love with a Jammu businessman across the religious divide seeks justice after he was killed by the police.


During the peak of the Amarnath agitation in 2008, which left Jammu & Kashmir divided, two lovers, separated by a distance of 290 km, sat glued to their mobile phones. They dreamt of a future together, even as madness erupted on the streets—both in the Jammu region and the Valley. “Both parties have gone mad,” 26-year-old Amina Yousuf would whisper from the bathroom of her house, overlooking the Dal Lake where two houseboats owned by her family trembled over the algae-ridden waters, while hundreds of thousands of protestors thronged the roads, shouting anti-India slogans. On the other side was Rajneesh Sharma, a businessman from Jammu, who spoke with his beloved from behind the shutters of his aluminium-fabrication workshop. Outside, a mob would pass every now and then, clanging steel thaalis in a raucous assertion of faith. That month, the mobile bill of the two lovers would cross Rs 25,000.

Roughly a year later, Anchal Sharma remembers all this and more. She remembers how Amina Yousuf fell in love with Rajneesh Sharma. And how they decided to get married. After all, only her name has changed along with her religion. “But my religion was love, and that has not changed,” insists Amina Yousuf, now Anchal Sharma. But in a state scarred with religious faultlines, Anchal, unfortunately, has memories of much more than her love. She remembers how Rajneesh’s face looked in the flickering light of the diya lit near the right shoulder of his corpse. She remembers that in a valley where deaths can create political upheavals, her husband’s demise didn’t evoke as much as a whimper of protest from any quarter—not even from human rights groups who create a furore over every little abrasion caused by the authorities as and when it suits them. These are memories she cannot wish away. In Kashmir, everything is political. Even the yearnings of one’s heart.

Politics was the last thing on Rajneesh’s mind when he fell in love with Amina Yousuf in the summer of 2002. He had come to Kashmir for Amarnath Yatra and stayed with a couple he knew in a houseboat owned by Amina’s family. Amina remembers she would talk to Rajneesh’s friend’s wife, and that is how their eyes would meet, occasionally. One day, the wife asked Amina for her mobile number saying Rajneesh had asked for it. Amina gave the details without thinking too much of it. Rajneesh then went ahead to Amarnath, and they spoke to each other only once he returned to Srinagar. Rajneesh then went back to Jammu, promising to stay in touch. “There was no declaration of love,” says Amina, “and yet, without saying this to each other, we knew we were in love.”

Days passed into years, and the two found that the distance would in no way diminish their mutual craving. Rajneesh kept visiting her, staying at times at her family’s houseboat. Amina had, meanwhile, told her mother about Rajneesh. In the absence of her father and two brothers, Rajneesh began to visit her house, sometimes staying over for lunch.

Time elapsed. One of Amina’s brothers went off to Australia to study medicine and married an Australian girl there. The love affair lasted seven years. Rajneesh would visit Srinagar, and the two would speak daily over the phone. “Can you imagine, I would take the phone even to the bathroom and keep it on while I took my bath,” says Amina. In August 2009, they decided to get married. On 21 August, Amina left her house telling her mother that she was going to meet Rajneesh. Her mother gave her some cheese for him, who relished it. By plan, Rajneesh was at the airport with two air tickets for Jammu. The two took that flight. Once there, Amina officially changed her religion to Hinduism and married Rajneesh in a temple ceremony. “But that was all formality,” says Amina, “I had turned Hindu long time back in 2002, even observing fasts for Rajneesh on Karva Chauth.” The same day, the two left Jammu for their honeymoon. They toured the country all the way to South India, returning to Jammu after five weeks of bliss on 29 September.

That was the very night that Anchal’s world came apart. The two had just settled for the night at Rajneesh’s brother’s house. Around midnight, a police team arrived, accompanied by Amina’s two brothers. They were shouting curses, and caught Rajneesh’s sister-in-law by her hair. When she asked the police to intervene, one of Amina’s brothers yelled that they had paid off the police both in Kashmir and Jammu. On hearing all the commotion, the newly-weds tried to escape from a backdoor. In panic, they found themselves separated; Anchal remembers Rajneesh’s brother Pawan shouting her name. It was then that Rajneesh came back into the house, fearing that Anchal had fallen off the stairs in her hurry to join him. There, the police pounced, throwing a blanket over him and bundling him into a Gypsy for the long drive to Srinagar.

Two days later, Rajneesh was produced in court as Pawan Sharma. Despite his injuries—clear signs of police torture—there was no medical checkup ordered. On 5 October, he was thrust in front of a magistrate again. It would be his last public appearance. Rajneesh died that day.

There were torture marks on his body. In the police version, it was suicide. The first postmortem examination was done at Srinagar. It was inconclusive. The second autopsy was done at Jammu. It reported multiple burns and injuries on his body. “It is clear that third-degree torture was inflicted upon Rajneesh at the behest of Amina’s father, who is a sub-inspector with the sales tax department,” alleges Anchal’s lawyer Pinky Anand. Anchal has since filed a petition in the Supreme Court, asking for a CBI enquiry, and that a case be registered against the guilty police officers and her family members. Also, she is aghast that no politician in the Valley has bothered to issue even a statement on the injustice. “If Shopian deserves an enquiry, and if Omar Abdullah and his entire Cabinet could be so concerned about human rights violations in the Valley, doesn’t my husband’s death deserve the same kind of concern?” she asks.

Meanwhile life has to go on. Anchal has decided to stay with her husband’s mother. The family wants her to look after Rajneesh’s business. “Do you know his shop was named AR Aluminium, and A is my name?” she whispers. “Amina?” “No,” she shakes her head. “Anchal.”