For those adventurous enough for an amazing subterranean experience, over 1,300 caves, including South Asia’s 10 longest, are there to explore in Meghalaya’s underbelly. 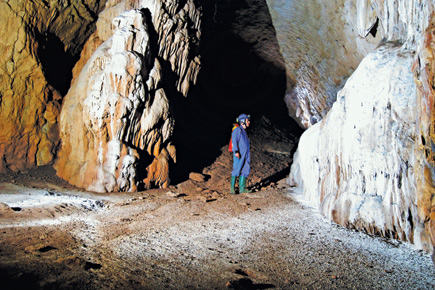 For those adventurous enough, there are over 1,300 subterranean caves to explore in Meghalaya’s underbelly.


Angie’s chamber is breathtaking. It’s more of a huge, high hall actually. But little does it prepare us for the brilliance of Annie’s Ballroom that we reach through Fraser’s narrow passage. The walls are a-glitter with what look like millions of miniature diamonds. The ‘murals’ and ‘sculptures’, some of which reach up to the surreally white ceiling, are intense and fantastic. A radiant archway leads away from the ballroom to a maze of corridors. We stare at it all in amazement. Man, despite all technological advances, could never have created this. Nature did.

Welcome to the beautiful underworld in Meghalaya’s polluted coal belt in the Jaintia Hills. This is where South Asia’s only caving expedition is held in February every year. The expedition draws cavers from all over the world, and is also a serious exercise in listing and mapping unexplored caves in this state’s underbelly.

Till Brian Kharpran, founder of the Meghalaya Adventurers’ Forum, started exploring caves in the Jaintia Hills out of sheer curiosity in 1992, no one had the foggiest idea that Meghalaya has South Asia’s longest and largest network of caves, mainly limestone ones. Brian, a banker by profession, started organising full-fledged expeditions from 1993, and from 1995, teams from other countries started participating. So far, more than 1,300 caves have been mapped—many of them stretch up to a few kilometres and have streams and rivers flowing through them. All of South Asia’s ten longest caves are in Meghalaya.

Caving is not for the weak or meek, as we (photographer Nilayan Dutta and myself) discovered. Veering left from National Highway 44 that connects Meghalaya’s capital, Shillong, to Tripura, our four-wheel drive vehicle takes three-and-half hours to traverse 40 km of what couldn’t even charitably be called a dirt track to reach Umkyrpong village about 150 km north-east of Shillong. We reach the campsite—20-odd small tents grouped together beside a large shack that serves as dining, recreation and mapping room, and another that houses the stores, kitchen and a dozen support staff—on a late mid-February afternoon. Brian, with an inimitable sense of humour, grunts a welcome. Some Indian Navy men who’re part of the expedition this year hastily pitch a small tent that we can barely squeeze into for us. The camp, when we reach it, has just a few people—most are yet to return from their subterranean trips. By dusk, small groups of tired, bedraggled foreigners and Indians, their bright overalls and faces streaked with mud and dust, start touching base. Warm bath is followed by tea and biscuits in the shack which soon looks like a war briefing room. Cavers take out their waterproof notepads and GPS-enabled palmtops to read out figures to their colleagues, who feed them into laptops to create 3-D images of caves based on the coordinates and measurements. Some others meticulously mark small points (the coordinates and dimensions of survey points in each cave) on large graph sheets—these, when joined after thorough checking and even re-surveys, become maps of the caves. Thomas Arbenz of Switzerland, a veteran of this expedition since 1995, is in charge of collating all the statistics and information and makes the final maps. I see him working till midnight. Every caver here is diligent.

“This is an essential characteristic of a caver,” Arbenz tells me. This work is far more sophisticated and painstaking than I imagined.

Plotting and mapping done in a couple of hours, it’s dinner time for the 40-odd cavers participating in this year’s expedition. Post-dinner, everyone gathers around the camp-fire to drink, sing, chat and make merry.

It’s freezing when we wake up at the crack of dawn. Planning for the day starts soon. Four-member teams are assigned to different caves. We’ve been embedded with a team of six to go into Krem (Khasi for cave) Blang, which, Brian tells me, is one of the easy caves. Fraser Simson of Aberdour in Scotland, an intrepid caver and photographer, finds ‘Wellington boots’, miner’s helmets and LED lamps for the two of us. After a half-kilometre trek through paddy fields and up a hillock, we arrive at the cavernous mouth of Krem Blang. “Never go into a cave alone, walk in our footsteps, don’t touch the walls and formations, and never remove anything from the cave,” Brian drills into us. Fraser and Peter Ludwig of Linz, Austria, lead the way. Brian and three young cavers from Shillong—Teddy, David and Malquire—guide us into this incredibly beautiful creation of nature. “These caves were formed over billions of years. Rainwater, which absorbs carbon dioxide from the atmosphere, seeps through the crevices and joints of limestone rocks. A chemical reaction occurs and the water passage starts getting bigger and bigger and, ultimately, forms such caves,” Brian explains.

The cavers have all the surveyors’ tools: compasses, clinometer (this measures the gradient inside a cave), ‘Disto-x’ (to measure distance between two points as well as the gradient) and GPS-enabled palmtop to get the coordinates inside a cave. “When cavers go into an unexplored cave, they mark survey points called ‘stations’ every few metres and note down the coordinates, the gradient and dimensions of the cave at every such point. These are then fed into computers and tracked on graph sheets to make maps of such caves,” Fraser tells us.

A few steps into the cave and it gets pitch dark. Our powerful LED lights strapped on our helmets guide us into the deep recess of the large cave. Fraser stops and gestures, we approach a patch he’s pointing out—to my amateur eyes, it appears as if a few dozen miniature diamonds and pearls, all perfectly rounded, have been strewn carelessly on the ground. “These are crystal pools. You’ll often find cave pearls at such pools,” says Fraser. Angie’s chamber—more than seven metres high, six metres wide and extending up to 50 metres—forms the central part of Krem Blang. It’s named after Angie Arbenz, another veteran of this expedition. Sparkling calcites—white when pure and red when contaminated by ferrous oxide—punctuate the cave walls. Ever inch of the cave lighted by my LED beam offers a fascinating and varied view—finely sculptured stalactites and stalagmites, serrated formations created by millions of drops of water trickling in super-slow motion over centuries, hanging curtains (linear deposits created by miniature streams of water coursing their way over soft limestone and sandstone rocks), vertical stacked formations, and much more that defies description—-that cannot be rivalled by any human creation.

Past this ‘chamber’, the cave narrows and we have to squeeze past (what I’ve named) Fraser’s corridor, crawl over ‘David’s pit’ (another christening by me), slither down a crevice and emerge into ‘Annie’s Ballroom’ (named after Annie Audsley, an expedition veteran from Edinburgh, UK). A group of stalactites bunched together in the ceiling of the central portion of this ‘ballroom’ looks like a huge chandelier. An archway leads away from this to a maze of corridors. We step gingerly past crystal pools and cave pearls, feast our eyes on the impossibly intricate formations and designs carved by water on the cave walls, floor and ceiling. Nilayan and Fraser click away to their heart’s content. Brian then sounds the retreat. Next destination: Krem Myntngam.

This turns out to be a difficult cave; we have to climb, jump, squeeze past and slither over rocks and boulders, and a green bamboo viper that David assures me (unconvincingly) is harmless. After half an hour of such arduous traversing, we reach a stretch that is a cave lake. Krem Myntngam, though not as beautiful as Krem Blang, has some really mesmerising sights—apart from the usual stalactites, stalagmites and other enthralling formations, there was the element of adventure here. And the lake, under which lie more unexplored treasures.

We trek back to camp through bamboo groves and paddy fields. By dusk, everyone’s in. An announcement is made: Leila Esfandiary Kajoryrad, a caver from Tehran, has turned 40 that day (15 February). The charming lady, who’s in charge of the laboratory in Tehran’s biggest government hospital, is besieged by greetings. Her Iranian team-mate Erfan Fekri, an industrial designer by profession, helps her cut a ‘cake’ (mashed potatoes shaped like one, actually) made by camp chef Mir Qasim Swer. Post dinner, we gather around the campfire. Erfan takes the lead in signing a few beautiful love songs in Persian. Leila joins in. Annie Audsley and Bridgett Hall, both from Sheffield, belt out some earthy Scottish numbers. Nilayan joins in with a Rabindrasangeet. The night fades away to the strains of an assortment of songs from all over the world.

The next day would hold out more marvels for the cavers. As for us, we had to return to Shillong. Thirty six hours with this expedition was enough to convince me that caving, as veterinary nurse Sarah Louise Payne of Somerset, UK, a veteran caver, tells me, offers much more than any other adventure. I’m tempted to pronounce, to borrow words from John F Kennedy, Ich bin ein caver (I am a caver).