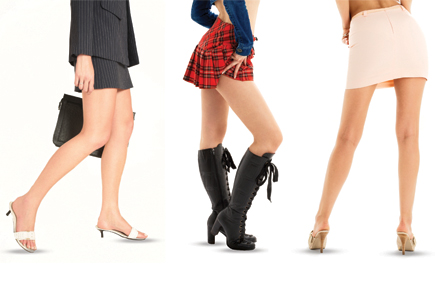 
She taunts me a lot. It usually happens in the morning, sometime post shower, prebreakfast, in or around my wardrobe. As I edit the best pieces on the racks, the snickering gets louder. Why? Why not? You’re kidding. There’s that Burberry scoop-neck shift that hasn’t seen daylight yet, the racerback dress I bought months ago but haven’t touched, a shirt-dress that I hunted down has only made nocturnal outings so far. I waited for the weight to go down, it did; I said the weather wasn’t right, but that was last monsoon; the right occasion came, and it passed. So, that fitted stretch dress I fought for but lost the right to wear back in 1995, jeers at me: you’ve grown up, you can wear what you want, then why don’t you?

All through my teens, I pounded my parents’ walls trying to push their limits on my wardrobe, which I believed required all sorts of ittybitties. When fazed by my mother’s staunch conservatism, I always said, “When I am older…”. But round about the same time I gained the right to choose, a force far more powerful than my mother quietly chipped my will to wear the things I once fought for. In India, where outfit preferences are governed as much by your audience as what you like, I, like many of my friends who swore they’d beat the system, have become wardrobe hypocrites. I’d like to always wear what I want, make my clothes a mark of my outlook and my tastes, but I don’t. When I look into my closet every morning, I don’t just consider the functions I’ll have to perform in my clothes, I calculate the people who’ll see me. I dress for the elders who prefer me in a kurta, the building watchman who may think God-knows-what if he catches me in a sheer top, even for the street lout whose lazy eye stops me every time I think of that shirtdress.

A different ‘I’ each time, and not exactly the one I want. As my stretch dress conscience often tells me: soon you’ll be too old to wear it. “At some point you decide that you’re not interested in changing the world, that you don’t want to stand out, you want to be practical, and in some way unadventurous,” says 32-year-old Mumbai-based scriptwriter Shubhra Swarup.

When I was 16, adventure was something we created out of nothing. A couple of times a month, when our working mothers left us to mind ourselves, my friend Diana J and I would take out our most forbidden clothes and walk about the neighbourhood. We didn’t go anywhere particular, or meet anyone specific; together with the illicit burgers and soda we wolfed, our elastic jeans and minis were just marks of protest. We did what we did simply because we shouldn’t. Plenty of our friends shed long skirts and baggy pants as soon as they stepped out of their houses, crumpling their parents’ concerns along with their sweatshirts into an extra bag.

All of us emphatically believed it was our right to wear exactly what we wanted. We still do. We just need to tell that guy on the bus, the security guard at the office building, even that evangelical office secretary, that it isn’t their privilege to judge us by our hemline. “It’s not that they’re eve-teasing, just staring. It’s as though some people have this throbbing desire to annoy the shit out of you,” says 23-year-old journalist Naina Hiranandani. My 16-year-old ghost says I should retract my antennae, that I wouldn’t have cared at 16, or 21, but, as I tell her over and over again, at 30, challenging a stranger every morning is a distraction I can do without.

But on those days when the taunts get louder, chicken, chicken, chicken, or a 100-watt fluorescent pink bulb goes off in my head, I get into my favourite halter-neck blouse and add a trusted battlefield lieutenant to my day bag: a stole. My stole is my middle path, my security blanket, and my compromise with myself. Twenty-five-year-old Ishita Moitra depends on a jacket for the same succour. The Delhiite moved to Mumbai three years ago, and is presently working on the production of her first screenplay, Kambakkht Ishq. While Bollywood affords more aesthetic allowance than the real world, Moitra says the roads outside Film City are daunting enough for her to make alterations to her wardrobe: “I was in an auto late one night and a biker chased me. It was bizarre, but now I don’t wear short skirts if I know I’m going to be late, and I keep a jacket with me.”

Every Saturday night, the 100-odd metre path that leads up to Zenzi Mills, Mumbai’s latest nightspot, offers a live tutorial on how subjective the notion of propriety is. The restobar is located within the walls of an old mill in the heart of Lower Parel, which until a few years ago was a modest enclave for mill workers and their families. At Zenzi’s new home, factory hands still live on parts of the compound. So on a weekend night, as Zenzi’s night-life customers arrive, their working-class peers have a new format for live entertainment: watching self-conscious LBD-clad female customers gingerly do the bumpy trek from their cars to the club door.

Gents should study, understand and embrace comedian Jerry Seinfeld’s man law: “Looking at cleavage is like looking at the sun. You don’t stare at it, it’s too risky. You get a sense of it, then you look away.” If everyone agrees men and women check each other out, then surely it is more tasteful to understand the how-to: do not talk to a woman’s chest; in fact, it’s not okay to stare at any part of her, and it’s neither cool nor advisable to sidle up and ask suggestive questions.

Perhaps I should try and make that corner lout understand that my scoop-neck blouse and A-line skirt are not meant to enthrall him. A round face needs the elongation of a deep-cut well-fit blouse, not the fattening effects of a saggy shirt, and it is a disaster of Napoleonic proportions to put a short person in a long skirt. Three years ago, just before Betty Friedan died, Emily Bazelon, a relative of the feminist-activist, wrote a Slate column about a shopping trip she took with her grandmother and Friedan. She remembered Friedan dutifully trying on dresses and rotating for their approval. “She let herself be taken in hand—she wanted to be taken in hand,” Bazelon wrote of the author of The Feminine Mystique. Even the then 61-year-old Friedan, who thought preoccupation with beauty a pre-feministic concept, ultimately wanted a dress that would flatter her.

But I haven’t worked up the frenzy to accost the oafs in the station, or tell off the uncle-aunty types who tell me a sari is more beautiful than a pair of jeans, just as I’ve stopped trying to push my mother’s buttons. I simply reserve my wardrobe’s sheerest, brightest, and tightest pieces for trips to cities where I’m sure the effects of my most alluring outfits will be appreciated without the tag of a ‘pub-going, loose and forward woman’. And, as my stretch-dress ghost usually reminds me, “Do it while you can still carry it off.”