As cola drinks are shunned by health junkies 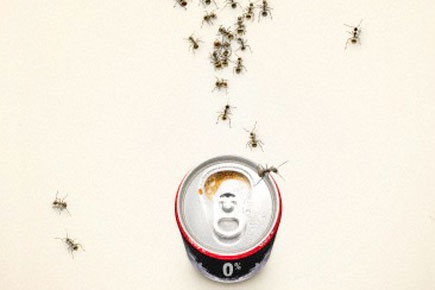 As cola drinks are shunned by health junkies


There was a commercial many years ago that had ice cubes as living beings thrilled at the prospect of being submerged in Coca-Cola. When the bottle opens, the ice cubes are ticklish with anticipation, like people on a rollercoaster approaching the apogee of the ride. When the drink pours over them, they squeal in ecstasy.

That was the 1990s, a time when Indians too did not mind splashing around in fountains of cola, as it were. We were not as health conscious. While common sense told you that cola couldn’t exactly be ginseng juice, it wasn’t seen as particularly harmful either. Those were times when even professional athletes in India were as likely to reach for a cola during breaks in play as water or a health drink. So when thirst or some sort of food triggered a cola craving, we gave in without a second thought. The market was also embryonic and had much space to expand rapidly. According to the website of the Ministry of Food Processing Industries (MOFPI), India’s soft drinks market—of which cola accounts for 62 per cent—grew at an average annual rate of 9.4 per cent over the period 1990-91 to 1996-97. But the market has lost pace, slowing to 3.5 per cent in the years since 2009-10.

Even today, the Rs 7,000 crore cola market remains robust in India, despite a worldwide downtrend. Coca-Cola India, which also owns Thums Up, India’s most popular cola, enjoyed a 27th consecutive quarter of growth in India in 2013. PepsiCo India says it does not divulge sales figures as a policy, but while it trails Coca-Cola India, it is not lying low. Pepsi is sponsoring the Indian Premier League (IPL). Celebrities are guzzling it in high-visibility advertising campaigns. The company has also launched a stronger cola variant, Pepsi Atom, as an option to its relatively mild and sweet flagship cola, and that too with a TV commercial that appears to make fun of Thums Up’s.

But beneath the bluster of cola advertisements lies a trend that has clear anecdotal evidence. Indians in vast numbers, at least in urban parts of the country, are staying away from cola drinks. Their reason is health. ‘Aaj kuch toofani karte hain’ is the slogan for Thums Up. But the truth is many believe that if you want to do something toofani, you have to go easy on cola consumption. Ask around, and chances are every second person in your circle has drastically reduced his or her cola intake or even given it up altogether.

There is a former Pepsi dealer in Mumbai who, in spite of his one-time industry affiliation, does not keep bottles of the drink at home. “My father-in-law suffers from diabetes. It could be hereditary,” says his wife, “And I don’t want to take any risks.” The couple has two daughters, aged ten and seven. When the family goes out for dinner, the girls are allowed iced tea or any flavoured soda other than cola. Not that these are particularly healthy, but they prefer it to the dark caramel of the world’s most popular artificial flavour.

Another Mumbai mother, Sona Bhasin, is powerless against her children’s love of instant noodles. She allows her kids a serving once a week. But when it comes to cola, she does not compromise. “They are allowed a Sprite once in a while. Juices are acceptable too,” says Bhasin, who has a 13-year-old daughter and an eight-year-old son. “But I rarely allow cola. It is just coloured water, chemicals and sugar.”

Cola drinks remain popular with collegians, but some of even these reckless youngsters have begun to avoid them, especially if they are trying to get into shape. Seema Abrol, a Mumbai resident, says, “My son is here from the US on a break. One of the first things he did after coming home was hand me his diet requirements. He doesn’t want to see cola in the fridge.” This could easily be the story in many households across urban India.

Cola drinks in India are still reeling from two major blows their reputation suffered in the first half of the last decade. In 2001, P Gopichand, who had recently won the All England badminton championships, refused a cola endorsement. Cola consumption, he said, was not good for health and he had stopped having cola since 1997 or thereabouts. Gopichand was not a mass hero like some Indian cricketers. But his stature and integrity were never in doubt. So when he said ‘No, thank you’ to Big Cola, forsaking Big Bucks, people sat up and took notice. Two, in 2003, the Centre for Science and Environment (CSE) alleged that soft drinks sold by Coca-Cola and Pepsi in India had pesticide residues above the permissible limits of such markets as the EU. The cola majors first ignored the CSE’s lab findings, and then put out vague rebuttals and ran ad campaigns that had celebrities endorse the safety of their drinks. Their executives even dropped hints about all drinkable liquids having the same traces of pesticide residue in India—levels that were too low to be of harm.

The damage, however, was done. Cola sales did not recover, and cola majors began to place emphasis on products seen as healthy. Such as fruit drinks. “Core carbonated drinks are growing at a slower pace,” admits Lloyd Mathias, former executive vice- president, marketing, PepsiCo, and now Founder Director of GreenBean Ventures. “[Beverage] companies have very smartly redefined their core business. They have broadened their range to offer other kinds of drinks and snack foods.” But he feels that it is only the tiny ‘top of the pyramid’ segment that is staying away from cola. That’s too few consumers to harm sales across India, he argues. But cola majors are taking no chances. They are increasingly relying on other products.

The aerated drinks business is mainly a two-cap race between Coca-Cola and Pepsi. Coca-Cola is winning the contest handily. According to the MOFPI, Thums Up has a 29 per cent share of this market, Coca-Cola has 25 per cent and Pepsi is third with 18 per cent. Coca-Cola is focusing heavily on non-aerated drinks. Of the 14 products listed on the Coca-Cola India website, nearly half a dozen are non-aerated drinks: Minute Maid Pulpy Orange, Minute Maid Nimbu Fresh, Maaza, Kinley water and Georgia tea and coffee. Minute Maid is reportedly set to launch a guava variant soon. Fruit-based drinks, it is believed, tend to sell all through the year.

According to market research firm Nielsen, the juice market in India grew 23 per cent from April 2012 to March 2013. The reasons for this, Nielsen said, were ‘health and convenience’. Other industry projections also suggest a bright future for non-carbonated beverages in India.

Pepsi’s portfolio also boasts of brands that consumers associate with health. These are Gatorade, the sports drink, and Tropicana juices (both launched in India in 2004). Nimbooz, a non-aerated lemon drink launched in 2009 and which tastes like homemade lemonade, has also done well. These products are seen as emblematic of the Indra Nooyi regime. Nooyi, CEO of PepsiCo worldwide, has wanted the company’s focus to shift from ‘fun for you’ to ‘good for you’ products.

Hectored by the health police the world over, most notably in New York, where Mayor Michael Bloomberg has banned large-size servings of soft drinks, cola companies tend to launch a spirited defence of their products when allusions are made to their health hazards. In India, they argue that India’s per capita consumption of cola is too low for health worries. Deepak Jolly, vice-president, public affairs and communication, Coca-Cola India and Southwest Asia, says, “Indians consume just 14 servings of 8 ounces per year. Even Pakistan and Sri Lanka and Philippines drink more. In Mexico, per capita consumption is 770 servings per year.” Jolly also says that the CSE’s pesticide allegations were proven false when the drinks were tested. He also emphasises that Coca-Cola’s promotion of non-cola, non-aerated products should not be interpreted as a weakening of its flagship drink.

Lloyd Mathias elaborates India’s attitudes to soft drinks. “In India, a large percentage of the cold drink business is summer and thirst driven,” he says. “March to June is the peak season. Sales in this period accumulate to more than 50 per cent of annual sales. Unlike in other countries, where people drink soda while watching TV or with meals, Indians drink it primarily to quench thirst or beat the heat. It’s hot, you are thirsty, you have a cola. It’s a cool nourishing drink.” He corrects himself. “Okay, not nourishing, refreshing.”

A former senior-level employee of a cola company in India, now working with a private equity firm, agrees that Indians are staying away from aerated drinks for health reasons. “It is a fair assessment, and I think it is something cola companies are struggling with,” he says. “Soft drinks are not core to Indian habits. There is an element ofdiscretion involved in making a decision to drink one. And so there is a cap [on] how much this category can grow. The aim of soft drink companies is to become a part of your life. But they have factors that we alluded to earlier (health concerns) which they have to overcome.” Weather dependence is an issue too, he adds.

India being an underserved market, however, offers cola players a vast opportunity. Think of cola non-drinkers. “Ultimately, business revenue has to come from depth of penetration,” says the former cola company employee, “Else it could be like the telecom industry. In the first decade of this century, capturing the telecom market was a piece of cake. A million subscribers would be added every month. But things get difficult when you reach saturation point and the cost of adding customers gets prohibitive.”

Bitter, sweet and strong, cola is a distinctive irreplaceable flavour that has million of lovers. It has shaped global youth culture in ways too varied to recount. Its spunky advertising is just one such way. But your body indeed comes first. While cola is forever, as an old adline had it, its consumption is likely to be ever more measured.