Terrorism’s New Face Could Be Green

The militant green across the globe are getting desperate and crackdowns by law enforcement on their acts of ‘ecotage’ are getting brutal. The battle lines are drawn 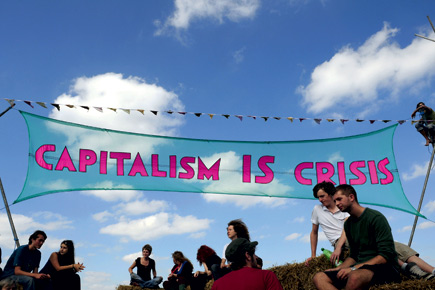 The militant green across the globe are getting desperate and crackdowns by law enforcement on their acts of ‘ecotage’ are getting brutal. The battle lines are drawn


“How many dynamite sticks do we need to blast a crack in that damn dam?”

Startled for a moment, I forced a smile. Sitting in an empty hotel lobby in a ghost town that once teemed with birds and birdwatchers this time of year, the frustration among a few local activists who had joined me was palpable.

It was March 2005. Bharatpur’s famed Keoladeo National Park, which used to get flooded after the monsoon and host thousands of migratory birds every winter, had gone bone dry and desolate. Under pressure from farmers who depended on a dam upstream, Rajasthan had refused to release water to the park for the second consecutive year. Petitions and protests by conservationists had made no difference and the wetland was on the verge of irreversible damage.

“No, really,” asked another activist, “could I help them procure some explosive?” Soon, the entire group was ready for whatever it would take to save a UNESCO world heritage site. I did not encourage the plan, which probably was anyway fuelled by a few rounds of evening drinks, but to be perfectly honest, it did not sound all that outrageous either.

A bumper monsoon rescued Keoladeo that year. But long before 2005, “green terror” had come to mean much more, at least in FBI files, than those colourful South American fish popular at upmarket aquarium stores.

This March, the FBI reiterated its $50,000 per head award for leads on each of the three fugitive members of an eco-terrorist cell called ‘The Family’ which committed “an estimated $48 million worth of arson and vandalism between 1996 and 2001” under the banners of the Animal Liberation Front (ALF) and the Earth Liberation Front (ELF). But the story goes back more than half a century.

In the late 1960s, a bunch of English activists formed the Hunt Saboteurs Association to disrupt fox hunts. After initial success, they reorganised as the Band of Mercy for “more militant action” in 1972. Four years on, the band regrouped as ALF whose militant activism soon reached American shores. In a 1993 report, the Departments of Justice and Agriculture called ALF the most significant radical fringe animal rights group responsible for more than 313 incidents of vandalism between 1979 and 1993 in the US.

ELF traces its roots to Earth First, an American radical green advocacy group founded in 1980 “in response to a lethargic, compromising, and increasingly corporate environmental community” in the US. Founder Dave Foreman’s 1985 book Ecodefense: A Field Guide to Monkey Wrenching was a manual on various methods of sabotage. In 1992, the more radical components of Earth First launched ELF, which often joined forces with ALF.

In 1998, ELF members burnt down a ski resort at Vail for its refusal to shelve an expansion plan that would have destroyed the last lynx habitat in Colorado, causing $26 million in damages. A number of Elves—as ELF activists are known—have been sentenced since, some under terror laws, to jail terms exceeding 10 years. They were classified as the top domestic terror threat by the FBI as early as in 2001 for causing ecotage (economic sabotage to stop the destruction of the environment).

According to the FBI, ALF and ELF activists together have so far caused damage worth over $100 million in the US alone. The 9/11 attacks temporarily shifted focus. But eco-terrorists—defined by the FBI as “those who break the law in misguided and malicious attempts to protect the environment and animal rights”—remained under watch across the world. In the UK, the National Public Order Intelligence Unit spends most of its £5-9 million annual budget on countering threats of green terror.

Like any underground network, eco-terrorists recruit mostly online. So far, their “operations” have only destroyed properties; they haven’t claimed a single life. With that moral edge, it is perhaps not difficult for them to influence the ideologically inclined since the number of eco-martyrs has been steadily on the rise. The appeal of taking on the alleged nexus between governments and corporations is cross-cultural and transnational.

Chut Wutty was probably the latest entry on the “martyrs’ list”. The director of environment watchdog Natural Resource Protection Group was gunned down in April by the Military Police in Cambodia while researching illegal logging and land seizures.

Since the 1988 murder of Brazil’s rainforest warrior Chico Mendes, nearly 1,200 activists, small farmers, judges and priests have been killed while defending the environment. In May 2011, José Cláudio Ribeiro da Silva, who tried to defend the Amazon against loggers, was killed along with his wife, hours before Brazil passed pro-deforestation legislation.

In 1998, at Chevron’s Parabe offshore facility in the Niger delta, villagers held a peaceful protest against the corporation’s destruction of the environment and traditional fishing and farming practices. So, security officers flew in Nigerian troops to open fire, killing two, critically injuring many and torturing the rest for refusing to sign false confessions.

Last year, environmental activist Juan Francisco Duran Ayala was killed in El Salvador while fighting a Canadian gold mining company. In 2010, Amit Jethwa was murdered by gunmen outside Gujarat High Court while fighting illegal mines in Gir run by a politician. In 2006, Filipino green activist Elpidio de la Victoria was shot, allegedly by a police officer, for leading a campaign to protect the Visayan Sea.

Killings apart, conviction of green activists on charges of fomenting separatism, rebellion and violence has become commonplace. Worse, governments are now being ruthless in handling protests. In India, mass resistance against land acquisition is routinely quelled with police brutality. This year, 10 anti-mega dam agitators were injured in police firing at Thekeraguri in Assam’s Lakhimpur district on 13 January. More recently, on 17 April, police opened fire on anti-dam activists resisting the controversial dam project on the Siang River in Arunachal Pradesh.

Excesses committed at Orissa’s Kalinganagar (12 tribals gunned down for opposing a steel plant in 2006) or West Bengal’s Nandigram (mass murder for refusal to offer land for a proposed SEZ in 2007) remain gory landmarks of state violence. Over the past few months, the government systematically cracked down on the antinuclear plant agitation at Tamil Nadu’s Kudankulam and Maharashtra’s Jaitapur by cutting off food supply and persecuting the NGOs involved.

But the trend is global. In April 2009, during the G-20 summit in London, the Metropolitan Police “kettled” (pin down to a location) more than 5,000 protesters for hours. The area outside the Bank of England turned into a stinking public lavatory. Each and every demonstrator was photographed and identified like a criminal. The operation cost the exchequer £7.5 million—astounding, considering it took less than £19 million to host the grand summit. Such is the fear of dissent.

Last month, while anti-NATO protesters occupied Chicago’s streets on 21 May, defying state brutality a day after clashes with police led to more than 70 arrests and some serious injuries, US President Barack Obama praised the cops for going “a great job”.

While atrocities committed by the state or business conglomerates often trigger radical responses, the wider ground for violence is being prepared by a gradual but rapid loss of faith. Often symbolic, the green movement still depends largely on the powers of reason and persuasion. But the days of democratic activism, hardliners believe, are numbered.

There are many instances where the best documentation, scientific argument and legal provisions have failed to alter ill-conceived projects and policies. For example, if mining goes on in some of the earth’s most pristine forests, against all economic and ecological rationale, it will be naïve to expect the radical greens to give up the fight just because they have exhausted all legal and civil options.

The consequences can be grave. Unlike Islamic or political terrorism which has limited appeal outside its religious and geographical context, the divide over justifiable use of natural resources is truly global and becoming starker by the day. The scale of a violent green backlash has the potential to surpass any civilian conflict the world has witnessed yet.

Already curious realignments of causes are afoot. In 2003, a section of the ELF leadership launched Arissa, a new organisation aimed at linking the anti-war movement to environmentalism. At home, political insurgency has become as much about sustainability as equality.

A host of recent political studies interpret the Maoist movements in India and Nepal as responses to eco-scarcity, triggered by dispossession of land, minerals and forest resources. Even ULFA hardliners threw their weight behind anti-mega dam protesters who were arrested in Guwahati in December 2011 and issued a statement condemning the governments for damaging local “culture and civilisation”.

It may yet be easy to dismiss the radical green as a bunch of primitivists, hippies or anarchists. But their swelling ranks will continue to seek dangerous unorthodox expressions to, in the words of a 1997 ALF communiqué, ‘halt what countless protests and letter-writing campaigns could never stop’ and may spiral out of control unless states and masters of the global economy make space for dissent.

Reporting the street vandalism triggered by the 2009 G-20 crackdown, a British daily put it bluntly: ‘The thing about kettles is that they do have a tendency to come to the boil.’ Fortunately, it rained in Bharatpur. But you don’t always get lucky.