Its creator in Japan had always envisioned sushi as fast food, to be savoured even by the road side. Here is what it is doing on Indian streets 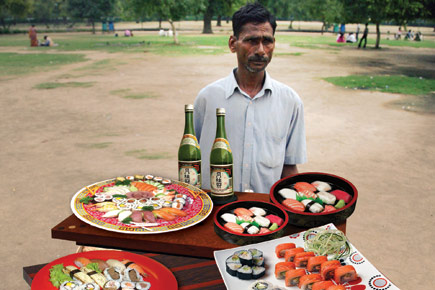 Its creator in Japan had always envisioned sushi as fast food, to be savoured even by the road side. Here is what it is doing on Indian streets


There was a time when a hush would descend over the gathering as soon as a bearer would usher in a platter of sushi. It was believed that only the most ardent connoisseurs could discern the true essence of this dish. The queen of fine dining, the epitome of sophistication, sushi was a must-have at every fancy sit-down dinner in town. And then, without warning, this culinary marvel took a step back from its rarefied surroundings. Soon, every nook and cranny in the country began serving its own version of sushi. It was found sharing the same platter as greasy tikkas in a pub and it also made an appearance behind fast food kiosks in malls. Many gourmands believe that this gastronomic jewel has soiled itself by stepping into the street.

While high-end restaurants like Wasabi and Sakura are still fighting hard to maintain the sanctity of their prized dish, a new brood of takeaways, kiosks and home deliveries has re-invented sushi with creative add-ons like mayonnaise and cream cheese. The average man on the street surely seems to be enjoying this new avatar, so much so that some outlets like Sushi King are making 100 to 200 deliveries daily to satiate this incurable appetite for sushi.

In a sense, these kiosks and home delivery services have taken sushi back to the times when it was invented in the eighteenth century by a genius called Hanaya Yohei.

Yohei had always meant for the dish to be a fast food snack that could be eaten on the roadside or while watching theatre. Originally, his invention was known as Edomae Zushi as it was made with freshly caught fish from the Edo Mae or the Tokyo Bay. But even Yohei would have been amazed at the creative spins this dish has been given by overzealous minds.

The sushi served on Indian streets is a takeoff from the variations served in the West. There is the very popular California Roll which contains avocado, cucumber and crab and the Dynamite Roll which is made with bean sprouts and mayonnaise. And one which would have surely sent shivers down Yohei’s spine is the Philadelphia Roll which is an imaginative mix of smoked salmon, cream cheese, cucumber and sometimes onions. Japanese citizens living in India are often amazed at these versions that we consider sushi. “Ingredients like ham, cream cheese and mayonnaise can never be part of the authentic sushi. The original sushi essentially makes use of raw fish and rice. But now, this dish is so popular all across the world. At times, certain places don’t have the resources or funds to get the right ingredients and that is when fusion takes place,” says Hitoshi Sagaki, master chef at Delhi-based Metropolitan Hotel’s famous Japanese restaurant, Sakura.

Also, a traditional sushi meal is as much about a community get together as it is about food. More often than not, strangers are found to be the best of friends at the end of a sushi dinner. Imagine sitting at the chef’s table, taking a sip of Japanese sake and watching skilled chefs slice, dice and roll the tuna, eel and salmon into delicious mouthfuls. Sushi is all about a wholesome experience. With home deliveries, the only experience you will have is of gulping down roll after roll while sitting bleary eyed in front of the television.

These services, however, seem to have found a lot of supporters across the country. In some ways, it is argued, these sushi takeaways and home delivery services have led to the democratisation of sushi. The glamour of the dish that is made with exotic ingredients and endorsed by celebrities, right from Robert De Niro to Riddhima Kapoor, has suddenly become accessible to one and all. It is happening all too fast for sushi, with the dish crossing borders, leaping across demographics and taking over the world. In some ways, this is an ode to the universality of sushi that allows it to be part of haute cuisine and fast food at the same time. In the West too, the glamorous $10 million, 160-seater enterprise, Morimoto (the head chef, Masaharu Morimoti, incidentally, is the man behind Mumbai’s Wasabi) co-exists with sushi fast food joints placed in malls, tube stations, food courts and airports.

Just like its western counterpart, the Indian sushi too has developed a life of its own. As happens with any foreign cuisine introduced into the country, it spawns a vegetarian Indianised version. It happened to pizza when it first made its appearance in Mumbai in the 1980s, to pasta and to Chinese cuisine. Sushi, too, has met with a similar fate.

However, for those who may have raw misgivings, the menus planned by these fast food joints are ideal. Various catering services like Ravina Bhojwani’s Mumbai-based ‘I Love Sushi’ has tried to modify the dish for the Indian palate. She makes use of many cooked meats like smoked salmon and smoked tuna and spins out pure-veg sushi platters as well. “I also try to make it spicy by using the special Japanese five-spice powder,” she says. ‘I Love Sushi’ caters to groups as large as 100 people at a time. Ravina’s loyal clientele raves about her Philadelphia Cheese Rolls and spicy tuna fish. The vegetarian options include pepper cheese asparagus sushi, snowpea nigri and asparagus sushi.

Since fish preparations are still rated a novelty by the average culinary buff, outlets like Sushi King make use of traditional meats like lamb, chicken  and pork in sushi preparations. “We use a lot of bacon and salami. As per customer requirement, we make the dish spicy by adding a dash of mayonnaise and chilli,” says Vijay Kadian, manager at Sushi King.

Testuma in Colaba, Mumbai, has gone way ahead in making sushi palatable to the Indian customer. They roll the raw salmon with cream, avocado, rice, nori and deep fry it. But can you really call it sushi if it contains any meat other than fish? Apparently you can.

“The true essence of the dish lies in the rice and not the fish. You can use vinegared rice in a variety of toppings, so using salami and bacon doesn’t take away from the authenticity of the dish,” explains Ravina.

Sceptics are clearly not convinced. They firmly maintain that home deliveries and takeaways are not suited for India’s tropical weather. According to Hitoshi, sushi is a very delicate dish and needs to be kept at a temperature lower than 4º C. “These services are not recommended in Indian weather, as maintaining the temperature is difficult and chances of the sushi getting spoilt are high,” he says. At Bangalore’s popular eatery, Harima, too takeaways are not encouraged. Only customers who stay close by are allowed to order takeaways and veg ones at that. It is believed that the moment sushi is kept out for more than 45 minutes, the roll loses its freshness and the nori or the seaweed becomes limp.

“Such services are ideal for people who merely want to experience the satisfaction of having savoured sushi, be it of any kind,” says Rajesh Khanna, head of F&B operations at Metropolitan Hotel. The owners of home delivery services come out in defence of their system. They assure that all care is taken to maintain the quality of the dish. “At Sushiya, the box is placed in an ice box to maintain the proper temperature during transportation,” says CEO Varun Modgill. At Sushi King, too, special insulated boxes and gel ice packs are used during home deliveries.

The prices, sometimes as low as Rs 150 for eight pieces, also add to the charm of these services. Sakamoto, however, doles out a firm warning. “I would advise anyone to be very careful of consuming sushi that is priced at Rs 150. Sushi is an expensive dish as the fish used is not available locally. A standard price needs to be maintained in order to assure quality,” he says. Takeaway and home delivery outlets don’t agree with this allegation. The owners maintain that costing doesn’t just depend on the ingredients, but on a variety of other factors like staff training, salary, rent, quantity of raw materials, so on and so forth. “We have trained our staff from scratch, we don’t have a restaurant in a high-end market and all our raw materials are purchased in bulk to reduce cost. And I can vouch for the fact that our products are of better or the same quality as any authentic Japanese restaurant,” argues Modgill.

All said and done, it seems that these outlets have done something right. They offer a win-win package for the customer with their attractive prices and Indianised flavours. In fact, for the newly initiated, the semi-cooked meats used in such sushi are a great way to get started.