Drool alert: plush standalone eateries in the metros are making the once-humble buffet much hipper than it ever was. 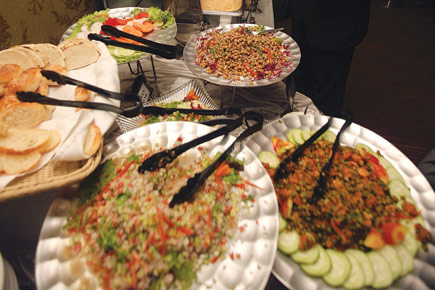 Plush standalone eateries in the metros are making the once-humble buffet much hipper than it ever was.


First of all, here is a toast to bad manners. Without it, there would have been no buffet. Did you know that the concept first came up in mid-17th century France because young gentlemen callers would arrive at the homes of their lady loves unannounced? The sudden arrival would throw the kitchen staff into a tizzy, and the only food that could be served at that odd hour was a selection of whatever the maids could rustle up from the cold room. So says Lillian B Lansdown in her 1922 housekeeping book, How to Prepare and Serve a Meal.

Lavish spreads of food were taken on only later in the fashionable courts of Burgundy, where row after row of exquisite delicacies would be laid out in stately splendour to satiate the appetites of courtiers. From the velvet chambers of the high and mighty to credit card accepting restaurants of the here and now, the buffet has made a journey all food lovers are grateful for.

Till barely a few years ago, the buffet lunch in Indian metros was the sole preserve of the five star hotel. And then, like a knight in shining armour arrived the Sunday Brunch, slashing through the dullness that had come to encrust the concept and staging a rescue act that still makes knees wobble, hearts thump and taste buds tingle. The buffet is now regular weekend fare at several upmarket standalone eateries in places like Delhi, Mumbai and Bangalore.

WOLF IT DOWN AT LEISURE

Mumbai’s Indigo Deli can pat itself on the back for being the first standalone eatery to take up the cause of the buffet in 1999. Its brunch buffet was lapped up by guests with gusto. “The reason for this is that it was an entirely new concept,” says Rahul Akerkar, managing director of deGustibus Hospitality that owns Indigo, “Outside of a five star hotel, people did not have the option of a lavish gourmet spread to indulge in.”

Though the format’s success was impressive, other restaurants took their own sweet time coming round to it. Indeed, it is only in the last two years that the brunch buffet has emerged from the shadows into its own. Akerkar puts it down to a lifestyle shift. “Today buffets have become more popular because people have less time to sit for hours and enjoy a meal,” he explains, “Many prefer being able to select from a variety of options and eat instantly.”

For a leisurely feast, there’s always the weekend—the Sunday Brunch. Once you’re done lazing around the house, glazing your eyes over the newspapers, and hazing your memory of that mess at work, there’s nothing more amazing than a sensational spread that saturates your senses with everything except the lolling luxury of grapes dangled Roman style. The ambience is one of complete and well-deserved relaxation.

“Sunday brunches have enhanced the popularity of the buffet for the simple reason that the entire family eats out and everybody has a desire to sample different cuisines,” says Saurabh Khanijo, CEO of Kylin. In this elegant restaurant located in the swish Vasant Vihar setting of Delhi, you can sample the delicate flavours of Southeast Asia. Every Sunday, guests are offered a glimpse of the culinary jewels of a different region. “For example, if we focus on Thailand, then we create ten kinds of salads in addition to the regular menu. On some days, we will have a laksa noodle counter, while on others we create a Bangkok floating market,” says Khanijo.

The challenge for restaurants is to keep the buffets from turning predictable, and that’s what keeps the chef and his team on their toes—something new and exciting to keep guests salivating. Live counters, though standard fare now, still arouse interest. While the much-used and abused pasta counters lost their novelty long ago, live stations for sushi, tapas and crepes have now got diners besotted. To see a slice of fish and handful of rice turn into an exquisite sushi serving in front of your eyes is nothing short of a conjurer’s act.

Gone are the days of Chinese and Mughlai monopoly. Stuffed with chicken in black bean sauce and mutton rogan josh, the avid foodie has sought refuge in delights of distant provenance. So if it’s not the freshly flown-in sirloin or tenderloin at The Oak Tree in Gurgaon’s DLF Qutab Enclave, said to be best wolfed down with red wine to help release its most finely nuanced flavours, it’s the sushi conveyor belt at Yum Yum Tree in Delhi’s New Friends Colony, a unique spread that leaves guests raving. “We wished to make it more lively and personalised, hence the sushi conveyor belt,” says Vikas Sharma, the eatery’s manager. Sushi, salad and desserts unlimited, all for a mere Rs 399 per diner, plus taxes.

Meanwhile, the craze for regional Indian cuisine is only getting stronger and more diversified. Finally, an era has dawned when South Indian doesn’t mean dosa sambhar but a rich gamut of flavours from the Moplah, Andhra and Chettinad styles of cooking. After being dazzled by the charms of sun-kissed Mediterranean food and spicy Oriental fare, chefs are now looking at including local Indian flavours in the buffet.

If it is a lavish Goan spread that strikes your fancy, you could make Opus in Bangalore your destination. The entire buffet with free beer and mojitos is an easy card swipe of just Rs 650 per head. For light-on-the-wallet coastal fare, you can head to the cosy Friends and Bacchus located on St Marks Road, Bangalore. “The coastal buffet is one of our most popular themes. We also have a World Lunch @360, as part of which you can choose from Indian, Pan Asian and European cuisines only for Rs 360,” says Xavier Prakash, manager, F&B. To savour innovation at its finest, though, you must visit restaurateur AD Singh’s chic eateries. Among the first to introduce Indian diners to the table brunch buffet, he has an all-new fan following for his newly opened Ai in Saket. “Chef Saby’s table brunch promises to pamper you and serve you a delicious meal every Sunday,” says Singh, “In store for you is an unlimited extravaganza with a selection of hot and cold appetisers, sushi tolls, teppanyaki, robata grills, main course and fresh fruit sorbets only for Rs 999 for adults and Rs 499 for kids under 10.”

If it’s ambience that makes your day of leisure, you have the option of dressing in your casual best for a Sunday ‘beach picnic’ at Olive Beach, in Delhi’s plush Diplomatic Enclave. As you walk into the white-pebbled courtyard tucked away in the lush green environs of a spiffy locality that can boast of housing the world’s most eclectic diners, you are greeted with your own picnic basket—packed with fresh fruit, baguette, jars of homemade bocconcini and even crayons and colouring material to keep the kids busy. The picnic’s peak experience, of course, is the choice of delectable delights from a grand seaside buffet of cold cuts, salads, sizzling grills and fresh homemade pizzas, with a sinful dessert station in wait. It’s that beach holiday you never took because you just couldn’t get away. In the heart of Delhi.

With the buffet bustle right under their noses, it’s a wonder that five star hotels have taken so long to wake up. But wake up, they finally have—and are ready to join the festivities with relaid spreads of their own. There’s the 360 at The Oberoi, Mist at Park Hotel, and Pavilion at ITC Maurya in Delhi, for example. “A good example would be 360,” says AD Singh, clearly impressed. “With its three permanent live counters, it sets a new standard for buffets. The pizza counter and the sushi works very well too.”

Frangipani’s buffet at the Trident, Mumbai, is getting rave reviews as well. This Mediterranean restaurant revolves around its ‘theatre of food’ theme, where the preparation and presentation of food are part of the sensory experience. Joy Bhattacharya, executive chef, Oberoi Hotels and Resorts, Mumbai, recommends the Chic Sunday brunch, which includes a live sushi bar, interactive live stations with rock oysters, oyster shots and home-cured salmon, washed down by unlimited servings of select wines and spirits. At Rs 2,100, inclusive of taxes, it’s a deal to drool over.

Restaurateurs like Ramola Bachchan, who runs Manre in New Delhi, however, are convinced that only standalone eateries possess that all-important personal touch. “I try to be present at Manre for lunch on most days,” she says, “so that I can meet the customers and get to interact with them.”

That has its charm, no doubt. Yet, for the buffet buff, a buffet is a buffet—just the thing for anyone given to kaleidoscopic cravings.