It’s not just for guys anymore. It’s for couples. But it hasn’t got its new game all figured out yet. 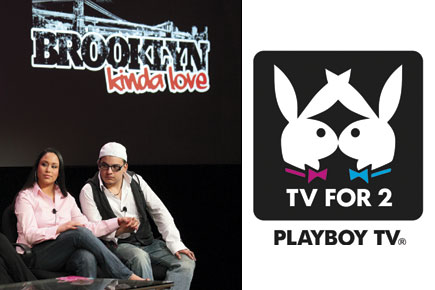 It’s not just for guys anymore. It’s for couples. But it hasn’t got its new game all figured out yet


When the first issue of Playboy magazine hit newsstands in 1953, its tagline, printed just below the name of the new monthly, was ‘Entertainment for Men.’ It’s still there today, and to hundreds of millions of people the world over, that’s precisely what Playboy has been for nearly 60 years.

That may soon change.

“Playboy TV has always been entrenched in the entertainment-for-men category,” says Gary Rosenson, senior vice-president and general manager of Playboy’s US TV operations. “But we found there is a movement amongst women in the sense that they are more open to and actually interested in sexy content that they can watch.”

Playboy burst on the scene in the 1950s, heady with the success and sexism of the time. Perky, bunny-eared cocktail waitresses, always-grinning, Playboy founder Hugh Hefner’s smoking jacket, and his hosting of endless clothing-optional parties helped define the era of hedonism that followed. The circulation of Playboy peaked at 7 million in the late 1970s.

Yet, with the collapse of print media and the great bazaar of free online pornography, not to mention the recent recession, circulation has fallen considerably—to 1.5 million today. As a result, the firm’s moneymaker is no longer the parade of nubile young women in birthday suits splashed across the pages of its magazine, but rather, its brand.

Playboy’s bunny-ears logo is known around the world and its branded clothing, jewellery and other knickknacks are popular from London to Shanghai. Playboy TV, the company’s premium cable network, turns 30 next year, but it remains considerably less renowned than the magazine or brand. A couple of years ago, its executives decided to learn more about the TV-for-adults landscape and find a new way forward.

They hired Sharon Lee, an independent analyst of cultural trends, to survey about 1,000 TV-watching Americans aged 21 to 50 years old. She found a gap between the softcore television content found on HBO, Cinemax and other premium channels and the hardcore pornography found online and elsewhere. “People were telling us: ‘Listen, we live in this world where everybody can get adult content if they want to,’” said Lee. “‘We’re not squeamish about the sexy content, we just want it to be better.’”

Lee also noticed how women gravitated towards sexy, glamorous television like the raunchy-but-smart HBO series Sex and the City (in which the lead character, Carrie Bradshaw, regularly wore a Playboy pendant necklace) and the E! Network’s reality series Girls Next Door, about three buxom, blonde Playmates living with Hef in the mansion. “Our culture has moved away from the idea that sexy content is just for men, at least in the United States,” said Lee.

Finally, Lee found that harried, modern lives—long work hours and work stress, the demands of children and constant interaction with technology—were making it difficult for committed couples to connect romantically.

Thus, Playboy’s idea of TV for 2 was born. Brooklyn Kinda Love, the first TV for 2 series, premiered last month. It is produced by Joe and Harry Gantz, who won an Emmy Award in 1995 for their HBO documentary series Taxicab Confessions.

Shot on location in Brooklyn, BKL is a gritty documentary-style reality show focusing on four young couples dealing with commitment and complex sex lives: a mixed race couple argues about the possibility of getting pregnant and goes to buy vegan condoms; in a Hispanic couple, the boyfriend is unable to give his girlfriend all the sex she wants.

Like MTV’s The Real World, bedroom scenes are shot in surveillance-camera green. There’s a good deal of sex and nudity, and even more sex talk. According to Playboy’s preliminary research, some 72 per cent of couples said watching the show together revved up their sex lives and 63 per cent said the show inspired more open communication about sex.

Brooklyn Kinda Love seemed to frustrate my girlfriend as well. She liked the concept of sexy TV for women, and for couples, and saw more open communication as a good thing. But after watching one episode, she came away unimpressed.

“I don’t think if couples are watching a show to get turned on, they necessarily want to watch overweight folks fooling around—it certainly doesn’t make me feel like having sex,” she says. “The sex parts were just really sad and made me uncomfortable.”

To her, the gritty show was nothing like the bright and perky Girls Next Door, which partially inspired the TV for 2 concept. “They already knew what worked,” my girlfriend says, speaking of Playboy executives. “Why didn’t they make a show like that?”

Good question, I thought—and posed it to Rosenson. The reply: “The first show out of the gate, we just wanted to get it as real as possible—shoot it documentary style, and really not direct the reality.”

Upcoming series will be in different reality genres: premiering this week is Swing, about a handful of attractive young couples living together in a house and swapping bedmates; and coming soon are an animated show of real celebrities recounting some of their personal sexual adventures and The Stache, a talk show in which the host spoofs various clips of hardcore pornography.

Rosenson also expects to add a scripted series and, if all goes well, to create a TV for 2 network: “It will be a good mix of shows that couples will enjoy together.”

It will likely take some time to know for sure whether Brooklyn Kinda Love, or TV for 2, is a success. Playboy TV is available in 70 million homes in the US, and in more than a hundred countries worldwide, but the network does not release subscriber numbers. Previously a pay-per-view channel, Playboy TV is now focused on subscription sales.

“When networks have changed their philosophy, it can often be one or two shows that launches them into the stratosphere,” says Rosenson, citing Queer Eye for the Straight Guy, which put Bravo on the map. “We’re looking for a similar response.”

The TV for 2 mission—to create sexy content that couples can enjoy together, enhancing sex lives, improving communication and perhaps helping nurture better relationships—is admirable. But the Gantzs’ choice may not have been the ideal one to kickstart the campaign.

According to Lee, the content goal of TV for 2 is to “to marry the high production values of Hollywood and combine it with the sexiness of Playboy.” This first attempt falls woefully short.

Playboy has only a few more chances to get it right.