×
One for the road

…and the views it affords of the Land of the Twosome 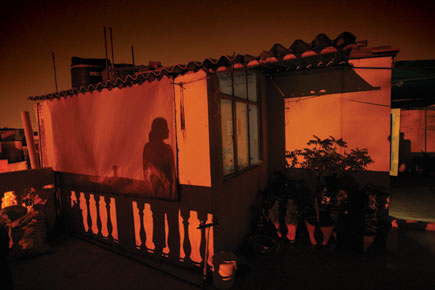 …and the views it affords of the Land of the Twosome


I am sitting on the verandah for a nightcap and a nice heart-to-heart with my dear friend, a women’s rights activist. She and her husband have moved down here recently from Delhi, and we have been excited about the opportunity to see each other more often. Their marriage has been rocky, deeply unsatisfying, for years, and he seems to be having an affair. But as he is the breadwinner and everything is in his name, she has frankly felt helpless, and unable to leave. Also, she is afraid she is too old to find anyone else. I suspect she loves him more than she admits, and also likes the feeling of being needed. Ten minutes into our talk, her phone rings: he wants to know where she has put the new bottle of ketchup and how he should heat the leftover mince. A while later, her phone rings again: where are his blue socks (the ones without the hole in the toe)? It could not have been more than 30 minutes until he calls again: he is tired, and wants to go to bed. How much longer will she be? My friend, face twitching, downs the last drink in two gulps. “We had a really bad week but things were a bit better today,” she says as she zips up her jacket, “I think I’d better give him some tonight. Tomorrow my parents are coming and I need him to be in a good mood.” You do that, I agree with her as we hug, you give him some and keep him happy for another day. I finish my own drink slowly, feet up on the railing. Above me, the monsoon moon, so round and pearly, hides inside the glowing mists.

Let me start by saying two things. One is that I love men. I truly give thanks for their presence in my life, and as far as the Noah’s Ark thing goes, men truly are my gender of choice. The second thing I want to say is that as I write this story, I fear the reaction. I imagine men sneering at me as I wait with them in queue at the bank or the petrol station; women lowering their shutters as I walk by; couples in cafes holding hands and giving me a cold once-over as I sit down (alone) at the nearby table. This is a bit over the top, no? I know it is absurd and yet these images firmly remain. Perhaps I am getting flashbacks from a past life where I might have been burnt at the stake as a witch.

It is not as if my confession is earth shattering, but I have learned to be selective in how I deliver it and to

whom. Often, people react strangely when I voice this: I like being single and I am not looking for a ‘relationship’. Despite often feeling isolated while navigating sparsely populated Planet Singlehood, I am enjoying all the empty space, vast stretches of it. From where I stand, the four-legged two-headed four-eyed creatures who live in the Land of Marriage can seem strange indeed at times, a related yet different race. I’m so happy to be only me, two legs and all.

I certainly wasn’t always. After the breakup of my marriage, my absolute assumption was that I must look for, and would shortly find, a new male partner, with whom I would share my life, my kids, my bank account, my chores, and my bed (not in that order, for sure). My religion supports the view that this is necessary and right, and everywhere you look, this belief is affirmed, by peers and relatives and all forms of cultural expression. People pair up; it’s just what’s done and how it’s supposed to be. As women, we are led to believe that the requisite for us to ultimately fulfill ourselves—leave aside surviving the rigours of this world—is to couple (with a man). This was an axiom I never questioned, especially since I was given the freedom to choose the right guy for myself (as long as he met a few basic criteria). Since my teenage years, a large part of my energies have gone into identifying, attracting, pleasing and trying to keep a man. I did not realise how much heart and mind space this quest occupied, but now, looking at it from the outside, I do.

And thank God, I have known the great heights of bliss as two merge into one. I have sipped that nectar, and Lord it tastes so good. I have known the usefulness of this merging as well, what it means to have a journey mate; someone else to absolutely rely on, to plot course with; to delight in the kids and share concerns, to vent frustrations with and to cuddle with.

I don’t know if it was about lack of skill, lack of maturity, lack of luck, divine intervention, but my marriage did not last the promised eternity; it did not even last into middle age (I refuse to call the mid-forties middle age). I was absolutely shocked to discover that my grandmothers and great grandmothers had once again been correct: by the time I was single again, all nice men really were married or gay, or interested only in women half my age (and waistline). It became clear that ‘finding’ someone would take much more effort and a considerable lowering of my standards. Time went by. I started realising I wasn’t checking out all the men in the room with the eye of a matchmaker (married, married, creep, cheap, married). A dating game dropout with no one right there at my side (besides the kids, of course), I had more time and space to be me and to find out what that meant. Soon I began to realise that I was going through a metamorphosis from being half a creature trying to complete herself into an already complete whole, round and pearly like the monsoon moon, the open expanse of clear sky all around me. I’d always fought for my own and others’ freedom—from abuse, from oppression, from occupation. Now I realise there was a price to be paid for being a couple that I could not pay, even though I had had my heart set on it. Now I’m living within my means.

Some people, trying to be kind I suppose, or helpful, often point out that my kids are probably worse off for not having a man in the house. This is probably true, though I have seen many houses where the children would probably have been much better off without that particular man in the house. This does not apply, though, in the case of their own father, and I feel great sadness, less intense now but constant, that I was not able to work it out with him for their sake. The attempt to compensate for that missing (male) adult in their lives, their other parent, is exhausting. I can only hope they are at least benefiting from watching their mom making our life work, relatively competently. I hope that their Mama’s fierce devotion is at least a partial compensation for all those times they are the only ones at the school outing without a dad at their side. I was not able to show them how to cross adulthood in a healthy relationship, but maybe they’ve learnt something about autonomy and strength, and true love.

It has been the ultimate emancipation as a woman to find out that I don’t need a man. There are moments when I look around for one, usually when something heavy needs lifting. The other day, I was walking with a friend, a tall strong man, down a Mumbai street at night and I felt so safe, so protected, it felt so good to let him lead. At moments like these I might experience a slight stab of shame, though not because I am not able to feel safe at night in Juhu or lift a heavy box. It is the shame of not having nabbed and held on to ‘a man of my own’, and when I feel this, I know my journey, of feeling whole unto myself, is not complete. You could say this is not a real choice I am making but an imagined one. You might be thinking, if the right guy were to come along, she would say ‘yes’ at once. I might or not. The choice is real, though: it is the choice to accept this chance life has offered and run with it. Although I didn’t actually have a party or buy myself a ring, somewhere along the line I got married to myself. It’s turning out to be a good union, bumpy at times but so much better than expected (even if I don’t always remember where I’ve put the ketchup or my purple socks, the ones without the holes).