The Parsi community, alarmed by dwindling numbers, has reason to celebrate as a repopulation programme shows results 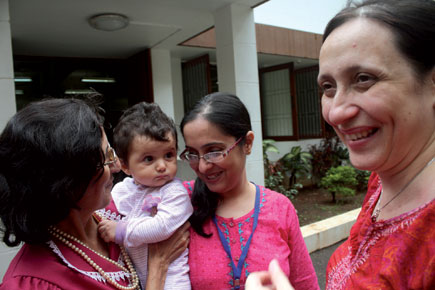 Around 35 Parsi middle-aged men and women, most of them couples and several of them accompanied by their children, have gathered in a community hall on a rainy Sunday morning for a parenting workshop in Mumbai. The din of sporadic yet heavy showers along with a mysterious babble of children from outside an open window enter the hall like the whir of a noisy machine. But those inside, who are part of the workshop, are not to be disturbed. They are in titters every now and then, play-acting a series of situations— from an episode where one of the parents acts as a boy who has flashed his private parts to a friend, to another who gets caught sending porn to a female college friend. Egged on by the organisers of the workshop, they giggle and improvise while enacting small instances of ideal parenting. So far, not very unusual.

But at the end of these acts, just when everyone’s attention seems most unwavering, comes a homily in the garb of an act: two couples sitting around a third, convincing the wife why, despite the challenges, she should have a second child. “Don’t be selfish,” one of them says, “your child needs a companion.”

Earlier, before the workshop began, one of the counselors for the event, Binaifer Sahukar, explained to me the purpose of the event. “What we really want is for Parsis to get married early, to have children, many children. And we do that, even through these workshops, discreetly.” At the end of the workshop, another counselor and volunteer, Pearl Mistry, introduced to the audience as the poster- girl of a programme called Jiyo Parsi for bearing three children, walks up to the front, and, with a mike in hand, says, “People say, ‘Oh it’s all pointless. Parsis are dying. There’s no hope. In some years there will be no trace of us.’ I say, even if a kid throws a single starfish into a sea of dying starfishes—it makes a difference, to the starfish.”

The Parsis of India, a religious and ethnic Zoroastrian group that began to reach Indian shores from Persia as early as the 8th century CE, did not just maintain their customs and adapt to life in India. Over the centuries, through hard- work and enterprise, they also became one of India’s most successful communities. The Parsi genius for trade and commerce, unlocked by the British, saw them setting up India’s opium trade with China, establishing banks, mills and business houses, and playing a major role in turning Bombay into the country’s business hub. They became, in an analogy they often cite, the sugar that did not displace but dissolved to sweeten the milk of India.

Their history is glorious. But in the past few decades, an issue of the future has begun to bother this tiny community, a discussion that is reaching a fevered pitch: looming extinction. Even as India’s population expands fast enough to displace China as the world’s most populated country in less than a decade, the count of Parsis is dwindling. It has fallen by a tenth each decade since the 1950s. According to the census conducted in 2001, there were 69,601 Parsis living in India, about two-thirds of them in Mumbai. In 1941, when the rest of India’s population was a fraction of what it is today, there were 114,000 Parsis in the country. According to the World Bank, the community has a fertility rate of 0.8, compared to a national rate of 2.5 children per woman. “Every year, some 800 Parsis die and only 200 Parsis are born. I shudder to think how much smaller we must have become since 2001,” Mistry says. Several issues—from youths delaying or foregoing marriage and parenthood to focus on their careers and mixed marriages outside the community to rumoured poor fertility of Parsi youths because of years of inbreeding—are said to have created this problem.

The community has made several attempts so far to address the crisis. The Bombay Parsi Punchayet (BPP), the trust that governs Parsi properties in the city, established a matrimonial department, a scheme to hand out cash to parents who have more than one child, and even a fertility clinic that offers free IVF treatment to Parsis who are interested. The youth wing of the BPP, Zoroastrian Youth for New Generation (ZYNG), organises speed dating, a blind-date fair called Being Cupid, and youth camps for youngsters. Last year, a community newspaper Jam-e-Jamshed even instituted a contest titled the Bawa Baby Boom Contest and announced a cash prize of Rs 50,000 for anyone with the best idea to increase the community’s numbers. But nothing really appears to have worked. The matrimonial department, for instance, is said to have fostered only 20 marriages in several years. Pearl Tirandaz, a dance choreographer who is one of the founders of ZYNG, says, “Sometimes it appears that despite all our efforts, the younger generation is just not interested in the future of our community.”

A new undertaking, however, has begun to show some results. Supported and financed by the Central Government’s Ministry of Minority Affairs, and managed by a Parsi organisation, this is a unique state-sponsored programme titled Jiyo Parsi. Through its counselors and volunteers, it conducts seminars and campaigns in various Parsi colonies and settlements. Their workshops for both parents and teens encourage them to consider the importance of early marriage and several children. Crucially, it also offers free fertility treatment to all Parsi couples.

The Government has set aside Rs 10 crore for this programme. Its current target is 200 babies within five years. So far, the Centre has announced the birth of 30 babies in the past year, including two pairs of twins. According to the team in charge, there have been several more deliveries this year, at least a dozen. “Oh, we will easily reach our target,” says Mistry. “Every few weeks we get calls or messages about new pregnancies and new deliveries.”

The idea behind the project began to take shape when Parzor, a UNESCO- initiated programme to preserve Parsi- Zoroastrian culture and heritage in India, began to travel to traditionally Parsi- populated places in Gujarat like Navsari. Those working on this programme discovered what resembled ghost-towns, with only the elderly to be found. Several villages, homes and Parsi institutions were empty and crumbling.

Dr Katy Gandevia, a researcher with Parzor and the project coordinator of Jiyo Parsi, says, “The old Parsis in these towns told us, ‘All this saving of art and culture is all very well. But what is the use if these buildings remain empty?’” Parzor Foundation began to conduct a series of studies to understand what exactly what going on, and then began to work on the latest project’s development, with the Government coming on board by the end of 2013.

Earlier this year, a couple from Dadar’s Parsi Colony began to ask Pearl Mistry a series of questions. The couple have a four- year-old son who would often play with Mistry’s children in the neighbourhood garden. “They would keep asking me about the challenges of having more than one child, and how the birth of a baby might impact an elder child,” Mistry recalls. “And then I realised they wanted to have another baby.” Their four-year-old son, although chirpy amongst friends, apparently appeared lonely and depressed at home. The parents, both in their late 30s, had been trying to have another child with little success. After learning about the Jiyo Parsi scheme, the mother began to consult an IVF specialist and underwent an IVF procedure, although the specialist informed her that it might take several procedures before she would conceive. The father’s mother, however, would often express displeasure that Mistry had convinced the couple to have a second child. “She would say, ‘Do you know how expensive raising another child is?’ I would know, being a mother of three, wouldn’t I?”

“Why are you all after the numbers?” Dr Gandevia asks on the phone when asked the number of babies born under the scheme so far. “This many Parsis born. That many Parsi pregnancies. The programme is more than just numbers. We are trying to change a way of thinking here.”

Till May this year, around 100 women had availed of the fertility scheme of the programme. Thirty Parsi babies had been born, 17 were on their way, and 48 women were under treatment. So far, it is believed around another dozen have given birth. “It might not look like significant numbers. But when you look at the births and deaths per year (200 births in comparison to 800 deaths), this is quite a big number,” Mistry says. “Imagine, if we achieve 200 births in five years, this will be 200 babies who would otherwise probably not have been born.”

The campaign has been successful not just because of its fertility programme, but also for its emphasis on advocacy. “To check the population dwindling further, we had to think out of the box,” Mistry says. The group holds heritage walks around South Mumbai, where several historical Parsi buildings are located. The idea is to generate, as Mistry puts it, a feeling of shared heritage. Jiyo Parsi began to hold workshops for couples and parents to goad them to have more children and to contain the rate of divorce. They even began to hold programmes for teens and youngsters, according to Sahukar, to catch them young. Each session ends with participants being implored to spread the word.

“When you put two Parsis in a room, there is bound to be some argument,” Mistry says. “But despite the arguments they put forward during our workshops, I think gradually we have begun to have an impact. We have to. Otherwise we won’t be here for long.”

A few months ago, Mistry received a phone call from the parents of the four- year-old boy who likes playing in the garden. The wife had conceived and she was expected to deliver her second child by the end of the month. “I haven’t met the grandmother though,” Mistry says. “I really don’t know if she will be happy or sad.”