Paradise Island, Up Close and Real

Zanzibar, in the southern hemisphere, offers a warm escape from the winter chill. But it takes a few days there for first impressions to peel off, and that’s when you begin to uncover its eclectic eccentricities 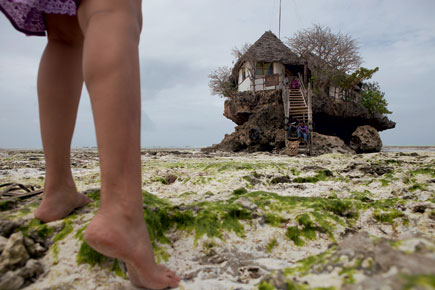 It takes a few days for first impressions to peel off in Zanzibar, and then you discover its charming eccentricities


There exists an unacknowledged manual on how to write about paradise islands. Each line should have at least one adjective. The waters must always be ‘turquoise’, ‘pristine’ or ‘azure’. And ‘tropical’ must prefix just about everything; one must enjoy the tropical island with its tropical fruits, tropical cuisine, tropical men and tropical women with tropical complexions. All this under a cloudless tropical sky. But feel free to replace ‘tropical’ with ‘exotic’.

Then there are the ‘don’ts’. Don’t mention sea urchins, sharp coral rocks or jellyfish lurking in the water; tourists will discover these stings or pricks for themselves. While writing about nightlife, don’t mention prostitution, harassment, substance abuse or the economic divide between sun-tanned locals and sunburnt expats. And above all, don’t go into the island’s politics, at least in any depth; nutshell its history if you must, but stick to the tour guide version.

Your job, after all, is to create a beautiful postcard, not write a complicated letter. So let the turquoise waters crash ever so gently on ivory sands under a bright blue sky, even if monsoons have begun to play havoc with the tourist season, dampening all the outdoor fun.

After working in Zanzibar as a journalist for a month, I threw the manual in the dustbin. When I’d first told people I’m going to Zanzibar, most mistook it for a seedy local bar in Mumbai. Although it lies just across the sea, on the other side of the Indian Ocean, our fate tied together by the monsoon winds, Zanzibar remains an exotic land in our imagination, like Timbuktu or Machu Pichu.

Zanzibar hadn’t featured in my travel plans until then, and I just didn’t know what to expect. I hadn’t read about it or known people who’d visited the archipelago. Which is why I was hellbent on going there. How often did you get to discover things without the burden of pre-conceptions? Zanzibar was a proper noun waiting to tell me what it stood for.

As it turned out, the place was closer home than I’d imagined. On our first day in Stone Town—the historic old town within Zanzibar City, also a Unesco World Heritage site—we crossed an Arya Samaj temple on our way to our host’s house. She had prepared a traditional Swahili meal for us, a meal of pulao, kuchumber and fried fish that looked and tasted exactly the way it does back in India. And this was just the first of many reality checks.

In the world of universal fantasies, retiring from the rat race to run a beach bar is a common enough aspiration. Some people do land up realising that dream, only to discover that the fantasy comes with a set of warnings in fine print. Lurking within every paradise island is an inferno of strains and stresses.

A local expatriate who began her rendezvous with these Indian Ocean isles a decade ago is contemplating a book on exactly this, with a separate chapter on Mauritius, Seychelles, Maldives and other island resorts, contrasting their honeymoon image with the reality of daily life there. It would explore the impact of tourism on these places with blunt honesty. At the moment, she is trying to think of a good title, something with the word ‘paradise’ in it, ‘paradise lost’ perhaps. “But that implies it was a paradise to begin with,” she catches herself saying. As an expat, she is privileged. She recalls a witchdoctor in Makanduchi having told her how being a foreigner grants her immunity from all the local ‘shaitani’ (evil), since one can only be afflicted by the ‘shaitani’ of one’s own land.

There is one evil that harasses foreigners more than locals, though: stress. In one month, I heard more complaints of being stressed out in Zanzibar than I normally do in two months in Mumbai. Perhaps this had something to do with chasing that ephemeral dream of leading a stress-free life on a tropical island. It doesn’t prepare you for the eccentricities of another culture, the heavy humidity (a silent killer), and the copious amounts of ‘chai’ officials need to get moving.

In Zanzibar, ‘chai’ is a reference to what Indians call ‘chai-paani’, the grease that lubricates corrupt machinery the world over. And for a foreigner to exploit the tourism boom here takes a lot more than this. There is an entire local culture to understand, and with racial prejudice in operation on all sides, this is never a breeze.

Another expat tries to explain. “In Europe,” he says, “the stress is low-level and grey, it’s always present. Out here, there is a lot more drama. There are moments of extreme satisfaction and extreme stress. You’re more likely to have a car accident, a government official pounce on you, or a neighbour do juju (black magic) on you…” Even if you live bang on the beach, the expat adds, you could easily forget that it exists. While holidayers just jump into the sea or settle into a hammock when the heat gets too much, you do not have that luxury… so much for your aspiration of turning your life into a working vacation. “There is a reason why offices have air-conditioning,” the expat quips, “it helps people think.”

What locals actually think, however, is quite another matter.

Bikini- and speedo-clad tourists can test the patience of even cosmopolitan cultures. Zanzibar may attract lots of tourists, but is largely a Muslim archipelago, where even little girls cover their heads, and any public display of naked shoulders or legs is seen as disrespectful. Yet, this doesn’t stop an Italian man from shopping in the Darajani fish market (think Crawford market in Mumbai) clad in nothing but his Speedos.

Imams in mosques have begun issuing warnings against the ‘immorality of Westernisation’. Their fingers are pointed at Zanzibar’s new ‘beach boy’ culture, at local boys who see tourists as easy sources of income, friendship and more (marriage and a passport to the West). Tourists too seek an element of sexual adventure in their travels. This leads to odd sights—like a Maasai man, attired in his tribal regalia of handwoven shawls and beaded jewellery, doing something of an MTV Grind with a White woman in a nightclub.

But even that doesn’t explain the crazy European who feeds his pet monkey beer at a local bar every evening.

Zanzibar’s name is derived from the Arabic ‘Zinj el-Bar’, which means ‘Land of Blacks’. It can be misleading if you interpret it literally, for Zanzibar was one of the world’s original cosmopolitan hotspots. A hub for all of Africa, Europe and Asia, this was where ships plying the monsoon trade routes of yore once converged. Even now, the island hosts age-old communities of Arabs, Indians, Persians, Europeans and even folk of Chinese origin who call themselves ‘Zanzibari’.

Yet, homesickness is a virus that is transmitted from generation to generation. South Asian settlers have long suffered from it, and it shows up in the lives they lead. Although Goans have been living here for centuries, they still miss the dried bombil (Bombay duck) of the Arabian Sea and get it parcelled. Salmon-like, Gujarati Hindus make diligent journeys in search of mates to the land of their ancestors, generation after generation. While many migrants have started marrying locals, such behaviour is still scandalous among Hindu and Bohra settlers here.

Parsis, once found in fair numbers, virtually vanished after Zanzibar’s Afro-leftist revolution of 1964 that overthrew the sultan who’d assumed power after its 1963 independence from Britain (though Arabs bore the brunt of that event). A thriving, influential community has since been reduced to a single family of two, an old Parsi man and his daughter. Tired of playing tour guides to visitors keen on tracing the life of Freddie Mercury (who, a relative of theirs, was born here), they prefer to live in obscurity.

Zoroastrianism in Zanzibar had always been a target of inventive myths. Dr Abdul Sheriff, a historian of the islands and research director at Indian Ocean World Centre, remembers absurd tales he heard as a child about a local fire temple. Dwiju, a local tour guide, enjoys ‘explaining’ why Parsis couldn’t get any vultures to the islands for their funeral rites: “Parsis have long lives, and the vultures got tired of eating vegetables and meat.”

Zanzibar’s history an interesting tale full of ruthless traders who treated ivory with greater care than slaves, long-robed Omani sultans, latter-day British rulers, and even an amorous princess who eloped. Tour guides tend to play historians themselves, spinning out their own versions. So long as tourists fall for it, inaccuracies don’t seem to matter. Were slaves really kept in slave caves and underground chambers? So long as they see chains strewn around the floor (no matter how aesthetically placed), tourists will believe it.

Over a cup of coffee, someone compares the culture of Zanzibar to an onion. The more you peel, the more layers you find. For outsiders, especially baffling is the complexity of Kiswahili, the local language. Simple names like Mnazi Mmoja (‘one coconut’) for a hospital, and poetic ones like Mgeni Haji (‘the guests never came’) for a village can mislead even the most earnest adapters.

“People sometimes operate on totally different wavelengths,” says an expat lady married to a local, “They don’t speak directly, they speak in nuances and metaphors. I have seen people use their kangas (local attire) to convey messages; these have proverbs printed on them, with two or three meanings. A woman could wear a specific one to accuse a neighbour of sleeping with her husband.”

The cultural complexities never seem to cease. Before one can work it all out, the isolation of island life gets to you. The blue walls of the Indian Ocean close in, and you suffer from a mutant strain of cabin fever, a kind of ‘island fever’ as it were. “Everything is so crazy here, your ‘crazy’ button gets reset,” says the lady. “Things that were once crazy become normal.”

And she still has several layers left to peel.