We trace the journey of the newspaper’s social-do page from Classy, Chic and Aspirational to Tarty, Tacky and Cheap 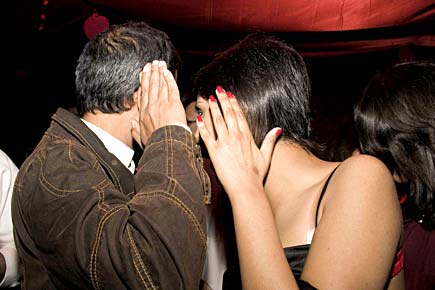 We trace the journey of the newspaper’s social-do page from Classy, Chic and Aspirational to Tarty, Tacky and Cheap


SHE WAS THE Herve Leger girl before people developed the nerve to spell the name out aloud. She walked about in Jimmy Choo heels long before Jimmy Choo spotted India as a market, and used only LV tissue paper to wipe off stray mascara. She sat front row at fashion shows, pouting her most discerning pout. The cameras might catch her, you see, and catch her they assuredly did.

That was then. Now, she has turned her nose up at the page that aired her vanity with such paparazzic passion all these years.

Pick up the paper. ‘Cheryl gets cosy with Sandy at Priyanka’s birthday do,’ reads the new Page 3 picture caption. Only, Priyanka isn’t Priyanka Chopra, she didn’t have SRK attending her party, and the closest she got to Harman Baweja was through Sandy’s copied haircut. Yes, you may stop stifling your yawn. It’s what Page 3 has become. The fabled socialite who graced this section of your daily broadsheet has fled. What you have instead is Priyanka, who lives the ho-hum life of the BPO employee and likes to party—with her picture in the paper a birthday gift from dad.

The space, as everyone knows by now, can be bought. Like some humdrum public notice, complete with mugshot. As for Cheryl, her chances of making the page is directly proportional to the depth of her décolletage, or height of her hemline, or perhaps both.

The result: a ‘creme’ page that comes from a can. The Queenie Dhodys, Ramona Garwares, Anju Taraporewalas, Ameeta Seths, Haseenas and the Nawaz Singhanias have all fled the Page in embarrassment. If anything is too infra dig nowadays, it’s the very thought of having one’s public presence showcased alongside a gang of washed out wannabes being held up as though they deserve any attention. “It takes effort to make celebrities out of nobodies,” sneers newspaper columnist Seema Goswami.

“No one wants to be associated with Page 3 any more,” says Queenie Dhody, declaring herself too discerning to be seen there any longer. Nawaz Modi Singhania, who’s also accustomed to being chased by shutterbugs, is no less blunt. “Page 3 has lost its class,” she says, “It’s become cheaper…people can just pay to be in newsprint. The arrival on the scene of little known ‘celebrities’ has made Page 3 cheap, tacky and tarty.”

We use the term ‘class’ unapologetically because Page 3 was never a communist concept—much like fashion. Once upon a time, it prided itself on portraying the have-a-plentys in the full glory of their public appearances. Such unabashed elitism certainly had purchase. In a country where revelations of wealth and the lifestyles it affords can never lose gossip value, there was mass curiosity about those who had it all (or seemed to, anyway). And it guided the rest along the aspiration curve as well, dropping the occasional hint of what the country’s rich and famous had on their minds.

All that’s over. We knew things were bad when even people like Shobhaa De, who crafted a career by exposing such lifestyles to the public glare, insisted she was “too busy” to talk about Page 3 when Open contacted her. Even the media-friendly Suhel Seth ran screaming at the very mention of ‘Page 3’, telling us to stop “wasting” his time. Page 3 doyen Parmeshwar Godrej, meanwhile, politely RSVPed her “regrets” for the story.

Is Page 3 now in such disgrace that no one wants any association with it whatsoever? Looks like it. “Earlier, it was only people who had some style or were style icons who made it to the page,” says Dhody, “not the sort who are creeping onto the page now.”

Dilip Cherian, spin doctor and seasoned Page 3 watcher, makes a snappy analysis of the phenomenon’s rise and fall in the country. “In India,” he says, “the coming of age of Page 3 coincided with India being visible internationally. India being visible didn’t preclude being posh. But as with everything else in India, it fell into a booby-trap and overheated way too quickly. Suddenly, a lot of space in print was available, which demanded a whole lot of people. And since you couldn’t have the ‘Page 3’ lot everywhere, the quality of people began to deteriorate.”

Readers overdosed on the same set of partygoers, over and over. To editors, these were the eyeball and revenue catching pages, so they simply had to be there, whether there was anything worthy of publication or not. The celebrities themselves cannot escape blame either. These unreasonable beings were not out partying every single day of the print calendar, leaving beat coverage reporters to scrounge for whatever they could find. “In any case,” says Goswami, “most bona fide celebrities are leery of being featured in them [city supplements]—they had to create new celebs to fill the gap.”

And what did our ingenious papers find?  Struggling fashion designers, obscure models, runners-up at neighbourhood beauty contests, or anybody whose dress sense appealed to the basic instincts of rakish photographers on the loose… even bhabhis trying to boogie, for gore’s sake! Dolly Thakore, once famous on the Page 3 circuit, is in no mood to be charitable. “The only thing that makes it to the pages is small stars posing with their panties showing,” she scoffs.

And that’s not all that is crass nowadays. “When we were on Page 3, and when Page 3 actually took off, we were all achievers,” adds Thakore, “The only way the current lot are ‘achievers’ is that they are earning enough money to pay Medianet to cover their parties and get journalists drunk.” Medianet, for the uninitiated, is that pioneering effort by the Times Group to ‘monetise’ the popular demand for Page 3 fame, a true sign of the commercialised times we live in. Appropriately perhaps, it is now called Optimal Media Solutions. You are welcome to optimise your public exposure, at a fee of Rs 2-3 lakh to cover a party you’ve thrown, so long as you can provide a ‘concept note’ for the page editors to crow about. According to Sivaji Sarkar, professor of journalism at IIMC, this has made Page 3 a “favourite spot for PR agencies”. Image consultants/stylists like Chaya Momaya, Nisha Jamwal and others are often accused of taking party contracts and rounding up “Rs 10 lakh worth of celebs for Rs 3 lakh for your party”, as an insider reports it.

This loss of exclusivity coincided with the swish set’s realisation that it was “no longer posh to be visible”, in Cherian’s words. They promptly went back to being camera coy. Soon enough, media lensmen started losing party invitations faster than i-bankers losing sleep. At least the parties that were worth attending. The rest were full of—pardon the term—riff-raff. And that’s what started appearing, giving a whole new dimension to the term ‘mechanical press’.

Inevitably, not everyone is unhappy with the way Page 3 has gone. Sandy, of Cheryl-gets-cosy-with fame, is insistent that there’s nothing tacky about him and others on the party pages. “What’s the big deal? The page doesn’t belong to them,” Sandy argues, “If they go to a party they get covered. If we go to one, we do too. I don’t know why they have a problem with this.”

Then, there are others, such as Mumbai designer Haseena Jethmalani, who are uncomfortable with the slotting of celebrities into categories worthy or unworthy of media coverage. “Just because you are rich, or just because they come from a reality show, doesn’t mean that they are B, C or D grade,” she says, at the same time admitting that “there isn’t much of the ‘A’ grade left anymore”. It’s all so blurred now that “people don’t even remember half the names in the papers”.

Sarkar agrees, though he has a slightly different frame of analysis. “The original Page 3 was part of a marketing strategy—the ‘in’ thing for party people, a sort of show window to sell copies,” he says. “But now that the page is popular, they’re trying to use it to sell nobodies.”

Some social analysts, such as a magazine editor who requests anonymity, make a comparison with the cult of celebrityhood in the West, especially New York. There, the pizzazz has not been lost. At least not altogether. Here, hype has overtaken all else. In New York, some of the ‘A plus’ socialites have started resenting being termed ‘socialites’, and the moniker has all but been dropped, even as the offstage antics of Courtney Love, Paris Hilton, Rihanna and their ilk continue to keep the celebrity press agog. The lives of the bold and brash are always of public interest, and that’s how it is. By design or by accident, the tabloid press often does end up serving a need that goes beyond ‘raunch culture’, as critics call it.

Sometimes, it’s just the terminology thatmakes the difference. Characters in the American movie Metropolitan, for example, recurrently refer to themselves as ‘the urban haute bourgeoisie, or UHB’. The rest prefer to be called designers, lifestyle directors and social activists.

There’s always the possibility that Page 3 will find a way to revive itself. This time, with a clear sense of purpose in terms of satisfying the evolving needs of newspaper readerships. Not all of it need be pfaff, though even that needn’t be so awful in sensible doses.