My Right to Say the Wrong Thing

As India grows, there is an increase in the delicate liberal types who get offended by almost everything. Suddenly, you don’t have the freedom to say anything 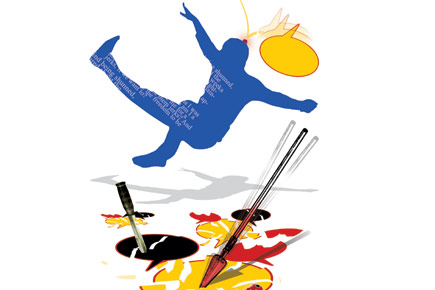 We live in strange times where, it seems, the only important commandment is ‘Do not offend’


Friend: Hey, what do you think of Rihanna?
Me: The Black rapper chick?

My friends gasped at my answer for two reasons. One was appalled that I should think of Rihanna as a rapper, the other was affronted enough to call me “racist” and storm out of the room. She returned later, but refused to talk to me the rest of the week.

I didn’t particularly mind being shunned, and I wouldn’t have cared about the ‘racist’ tag, if I were one. A few weeks later, I was almost lynched at a nightclub because I said a friend’s acquaintance, who was dark, looked South Indian. She wasn’t from the South, apparently.

The fact is that in both situations I was simply being matter-of-fact. So am I a jerk? Many people mistake me for a Sardar; does that make them jerks?

And shouldn’t we have the freedom to be jerks, if we want to? Recently, in my office, strong objections were raised against calling a girl ‘chica’. It was a pre-emptive strike. The folks who objected to the term had no idea what ‘chica’ meant. They thought it demeaned women, so if you used the term then you were a chauvinist.

What’s wrong with this kind of hyper-righteousness is that people can become tyrannical to protect their ‘values’. Even women aren’t spared, not even a chief minister. Last year, a Delhi-based TV journalist was murdered while driving home late in the night. It was a particularly gruesome and shocking murder. But is it unreasonable to have wondered if she should have been a little more careful? Sheila Dixit, Delhi’s Chief Minister, was branded ‘sexist’ for asking that question. If men can drive home at four in the morning and work late, so can women. I agree. A city’s streets ought to be safe for everyone regardless of gender, but the Delhi CM wasn’t totally wrong in making her point. In the times we live in, the fact that women are not safe driving alone through some stretches of the city is simply an uncomfortable reality. Should something be done about it? Absolutely. But till it is, women need to be more careful. Raise the topic over a beer, and you will find out exactly how good it is for hair.

A friend who argued that women shouldn’t wear mini-skirts in crowded places was whooped by a pack of feminazis in his office. His point was that women should be discerning about where they wear short skirts, he wasn’t implying they shouldn’t wear them at all. You will get an equally unfriendly response from a particular type of sun-block users whose lifestyle includes walking with English placards, if you question the idea of Tibet or criticise monk protesters.

The environment lobby is worse. I drive a diesel car, aspire to own a Hummer, and my idea of a great Sunday is tearing through the Aravalis in a 4×4 that has never passed a pollution test. Some of my ‘enlightened’ friends ask me how I can be so irresponsible, so flagrantly inconsiderate. But what about my right to enjoy the power of my car, my right to take pride in the fact that my legitimate vehicle eats up more road than any other machine?

What about people who believe it’s illogical to shut off a car engine at every traffic light when there’s 43º C heat outside and a stoplight every 76 metres? The green lobby couldn’t give a toss if the rest of us have heatstroke as long as we’re buried in something biodegradable. But then why should the rest of us sacrifice our right to have a dissenting view on the subject?

But the largest minefield for political correctness is sexual preferences. Thou shalt not make a homosexual joke in front of a man who bats for the other team, and you shall say ‘gay’ not ‘homosexual’. Apparently, the word ‘homosexual’ lays inordinate emphasis on sex, while the term ‘gay’ has positive connotations.

I refuse to use the word ‘gay’, not because I don’t like its positive connotations, but because I went to a school which had the following words in its school anthem: ‘We are Springdalians happy and gay’. Once kids caught on to the fact that the word ‘gay’ had been appropriated by a section of the population, they began giggling through what was meant to be a serious and inspiring song. The words were subsequently changed to: ‘We are Springdalians and we are here to stay’. On the other hand, why should homosexuals be presumed as happy? Heterosexuals are happy people too. And if ‘straight’ is the term to hang on to, there isn’t anything wrong with ‘bent’, is there?

Getting sexual terminology right is not the only thing a man could be castrated for, animal conservation is a second major risk. Try telling a gathering that you itch to hunt at least one animal in your life—even if it is something as destructive as the blue bull and you will be threatened with nauseatic glances and abject disapproval.

The most ridiculous demigod I’ve ever heard of is this guy a colleague was gushing about. He went to someone’s house for dinner and found a tiger skin rug. So he burnt it. He has now become some kind of a hero. But why? I think it is extremely rude to burn your host’s rug.

Animal lovers are menacing people. Try admitting aloud that you’d like to go out hunting at least once in your lifetime and you’d understand how it feels to be a prey. Confession: through the ages of four to ten, my favourite possession was an authentic leopard skin coat procured from the erstwhile USSR. Needless to say I don’t wear it anymore, neither does it fit, nor do I wish to get egg-faced by an outraged animal rights activist.

Dogs are an even more perilous subject for the Politically Incorrect. They climb on to cars, upturn dustbins, bite children and any number of postmen, but if you dare to suggest, however quietly, that the critters ought to be put down, Maneka Gandhi, most of the girls in the Penguin publishers’ office, and thousands of other good souls will bray for your blood. Who cares about your right to be safe? There must be some perk to being the dominant species. Then there are those of us who refuse to turn vegetarian despite appeals by Che Guevara’s topless granddaughter. Isn’t it our God-given right to have a spoon of Beluga caviar, if we so wish and can afford?

We live in strange times where, it seems, the only important commandment is ‘Do not offend’. So, black is not black (it’s African-American), fat is not fat (it’s healthy), blind is visually challenged, lame is physically challenged, gay people are not to be called homosexuals, and transgenders are not to be called trannies. But it’s okay for everyone to offend this poor man who’s getting so used to walking on his toes that he might as well put on a tutu and join the ballet. But that would offend the alternately sartorially inclined.