My Experiments with Toilet Etiquette

With globalisation making us adopt the world’s best practices, could bathroom behaviour be far behind? 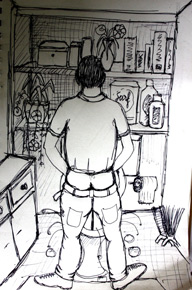 With globalisation making us adopt the world’s best practices, could bathroom behaviour be far behind?

A friend who knows me well enough to ask this question asked me in a German city: “Do you sit or stand when you pee?”

He advised me to sit when I pee. “The girls would like it that way,” he reasoned. I thought it was said as a social incentive for me to comply. Girls, I realised, sit to pee. And if I don’t do likewise, I would perhaps dribble and sully the seat, which girls won’t like. My friend had a genuine concern. The last few errant drops of urine might even fall on the floor around the pot if I were to stand and relieve my bladder. I would wet both the pot and the floor. The whole place would stink.

Since girls usually sit to pee, they cannot see why others can’t do likewise, though in Helsinki one evening, I saw a girl urinate standing next to an old building—she just opened the zipper of her tight jeans and let a stream whizz out. She did not seem the least apologetic. She may well have been drunk. Till then, I didn’t know this was possible. I later learnt of an entire stand-and-pee movements among women.

Indians mostly, even in urban settings, don’t use toilet paper. Instead, we are predisposed to wash up—and this can contribute to the messiness of a bathroom.

In Europe, I didn’t have an option to wash up. Toilets do not have water faucets alongside. In response, I adopted the European practice. If I had got paranoid about my hygiene, all I could do was take a shower after a dump. Some Indians, however, don’t give in so meekly. They take along a mineral water bottle, which provides the satisfaction of a wash at the cost of two euros (about Rs 180) and a failure to keep the surroundings dry and clean.

The kindly advice I got in Germany, which another friend describes as “strange”, was food for thought. I ended up doing a little survey on toilet habits—I asked the same ‘strange’ question of many Europeans. The outcome was mixed—it is clear that far more European men prefer to sit for a pee than Indians.

I am aware that it’s not a fair comparison to make. In Europe, bathrooms are treated like any other room in the house. Many I used were equipped with furniture; a chair or two, a bookshelf, even a table, apart from the usual fixtures: a mirror with shelves and a washing machine. The idea is to always keep it dry for it to function like just another room. So there are shower curtains, and cloth to wipe clean the wet floor and every WC has a cleaning brush by its side. People are expected to prepare the WC for those who would follow. Everyone does that—even drunkards and addicts. Some even open the window to ventilate the foul air and in the process allow in a gush of cold breeze; I got goosebumps trying to do this. In the West, shit-pots are treated like chairs, and that’s why they also called toilet seats—the French use the word trône which actually means throne.

In India, a shit-pot is a shit-pot, never a chair. Not long ago, bathrooms were constructed outside the four walls of the house, which is still the practice in many rural and semi-urban areas. Indians have long treated the toilet like a public space—something that belongs to us all and so no one takes responsibility for it. A public toilet in India usually looks like it was intended for torture rather than relief: from the yellow crusty layers of dried urine—soaked wet as scores of people micturate on it—arises a fuming stench. It feels as if one is locked in an ammonia gas chamber. It stinks so badly that (mis)users try not to breathe as long as they can avoid it. They often spit before they leave, in the belief that this cleanses them somehow of the toxic fumes inhaled. Some are literally standoffish: they stand far away and aim their urine far onto the wall. Some seem blessed with a pump instead of a bladder.

A sociologist friend who specialises in studies of the Indian Diaspora, and has lived for many years in the US, tells me how she uses a public toilet in India. It’s a fine balancing act: she straddles the pot just enough to ensure she can pee into it without any contact whatsoever. Many of her friends do the same, she tells me. And many a times, these women reduce the place to a watery mess. But there is no other way of avoiding a urinary tract infection, she says, something all women are susceptible to. It is not just the usual variety of bugs—the streptococci, staphylococci, E coli and shigella bacteria—that scare them. There is also hepatitis A, apart from a range of vicious organisms that are sexually as well as toilet transmitted.

It may seem safer for women in India to use the great outdoors. In fact, large numbers of rural residents do, but that exposes them to other threats. Half the country’s people—about 600 million in all—do not have access to toilets, putting at risk of rape women in rural areas who must relieve themselves out in the fields or wilderness.

On safety, the contrast between India and the West is stark. In Europe, I actually drank tap water after taking a leak—it is safe to do so there. Here, potable drinking water is a privilege only for the well-off. Although access to drinking water has improved, the World Bank estimates that in India 21 per cent of communicable diseases are related to unsafe water. Diarrhoea alone causes more than 1,600 deaths daily.

The best of toilets in Europe take very little water, but assuming five uses of a flush every day, each West European will end up using nearly 9,000 litres of drinking water to flush a pot every year. In addition, an average West European uses 15 kg of toilet paper every year. It takes 3,624 kg (one cord) of wood to manufacture about 450 kg of toilet paper. So if 1.2 billion Indians were ever to start using toilet paper, it would unleash an environmental disaster. A country like Finland—75 per cent of its land is covered by forest—would be denuded of its green cover in just a few years.

I carried out some experiments. It’s true the probability of spilling urine on the floor is higher when you stand than when you’re sitting. But a man still has a problem while sitting: your instrument is hidden between your legs, and when you rise, some drops may still trickle out and onto the floor; this risk is higher in case you are uncircumcised and need to shake off the final drops, but in a seated position, this is difficult. But I did follow my friend’s advice. He wasn’t convinced. Maybe he was suspicious because I still left the toilet seat up—in fact, the lid entirely open—as if I had pissed standing up. The polite thing to do is to leave the WC dry and clean and the lid firmly shut. If I could do just this bit, no one would be bothered—or know—whether I sit, stand or dance while I pee.

My friend is perfectly justified in issuing the advisory. He is aware of how badly we Indians mistreat toilets. Expats see dirty toilets as one of the big hazards of living in India, among other things like dealing with pollution and traffic jams, the heat and dust. For the past five years, I have been hosting expats in my house. I have shared my living space with 14 flatmates so far. They have stayed with me for periods ranging from two months to a year—perfect strangers who became close friends. By European standards, the toilet in our flat is dirty. I remember a flatmate making a video of the house before he left after six months of stay. He left out the bathroom, muttering something about it being “dirty” as he passed it by.

Maybe it was rude on my part to have made them use a toilet which they couldn’t possibly treat like a chair. I didn’t provide them with proper “toilet cleaning equipment”, as one of them pointed out, and nor did they bother to procure it. But they never complained. They never bothered to clean it themselves either. Was that a compromise or a sacrifice? “Good manners,” as Ralph Waldo Emerson said, “are made up of petty sacrifices.”