The traditional dress of Kerala gets a makeover with designer prints, bright new colours, Velcro strips and side pockets 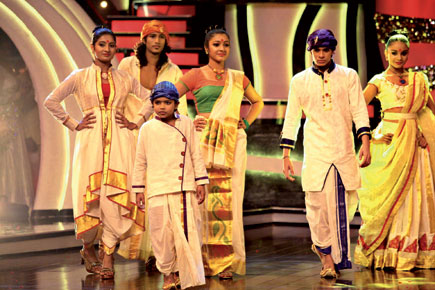 It was KT Vimal’s wedding hour, and his bride, beautiful and tense, in gold and silk, sat waiting for him to settle down. Relatives, friends and photographers with hot halogen lights scanned him from head to toe, collar to shoe, because he just wouldn’t sit down. “Irikku, mone (Sit down, child),” someone repeated from the forefront. For Vimal, the requests, murmurs and the winding notes of the nadaswaram ceremony seemed elsewhere. All that he was aware of was a crisp crackling noise that erupted from the Velcro of his mundu every time he stretched out. The fear of an embarrassing wardrobe malfunction.

“That was easily the most uncomfortable moment in my life. I just knew it would fall off. Even if I took a deep breath it would make an annoying ripping sound. It was clearly a wrong time to experiment with a new variant of the mundu. But it had arrived as a gift from my friends,” says Vimal who got married four years ago. An advertising manager with Deccan Chronicle Holdings, he swears that ever since that unfortunate night he has stuck to the traditional method of draping a mundu— gripping the left edge of the white cloth, swinging the right end towards it and tucking it secure at the waist level. When he wore the variant, it was only sold as a part of expensive wedding collections. But the Velcro mundu, the plight of people like Vimal notwithstanding, has since shot to commercial popularity. And it hasn’t just stopped with Velcros. Probably for the first time ever, the mundu, traditional wear in South India, now comes stitched with side pockets.

Ramraj Cottons, pioneer of the new mundu model, says it was the result of a survey conducted on 200 people. Priced at Rs 700, these are GenX dhotis with an attached pocket. “Most of our buyers were forty-plus. We wanted to reach out to youngsters as well. So we came up with the Velcro version. 80 per cent is being sold in Tamil Nadu and the rest across Southern India,” says a spokesperson for the company.

The tagline reads, ‘Stick it, forget it’ and it targets customers like Vikas Khanna, whose brief experience with the mundu told him that there was no forgetting it. This was when he signed up for a gorgeous TamBram wife. On his big day, while he saw his in-laws wearing it like a skin, he squirmed and sashayed with feminine embarrassment.

“It was like a scene out of Chetan Bhagat’s Two States. Though I didn’t have Mickey Mouse underwear to flaunt, I was very aware of how thin the cloth felt. How do these people hold it on their waist? Before I tried on the Velcro mundu, I secured it using a belt. By now my wife’s family has made peace with my style of dressing, and I opt for simple kurta- pyjamas instead. But the Velcro mundu is a good reason to give this attire a second chance,” he says.

The mundu is an object of both amusement and admiration in pop culture outside of south India. Bollywood both adopts and jokes about it. In 2007, Shah Rukh Khan wore one while hosting Kaun Banega Crorepati, Malayalee-style, for Sanjaya K, a contestant from Kerala, and then did a caricature of it in Lungi Dance. At a recent endorsement event, Amitabh Bachchan was spotted in a mundu, with a stiff collared crisp shirt and a veshti on his shoulder. He wrote about it on his blog after a short visit to Kochi: ‘The ‘dhoti’ in all its pristine glamour, is tied around the waist by sheer will power and some dextrous use of the stomach muscle, else it slips down and opens up!! It is just a piece of cloth, no buttons, no belts, no clips nothing. Simple, elegant, convenient, with its own characteristic charm and above all air conditioned at all times!’

In Kerala, despite many youngsters preferring to wear shorts and jeans, the film industry stays loyal to moustaches and the mundu. Some of actor Mohanlal’s most famous characters are remembered in them. One of them, Aadu Thoma, in the 1995 movie Spadikam, wore bright red knickers that sneaked out of his mundu, which he used as his weapon. He would unwrap the mundu, throw it over the baddie’s head and bash him till he bled.

But there are now first timers even on the sets of Malayalam films who are wary of the mundu, the fear of tripping evident in their gait and over-conscious dialogue delivery during a shoot. “For most of the younger actors, I design a Velcro mundu. I make these myself. A strap of white Velcro band to which the rims of the mundu are stitched, then stuck. Sometimes I also make it in the form of a white belt—it helps actors be at ease and concentrate on their performance,” says Sameera Saneesh, a costume designer for Malayalam films.

Manu Radhakrishnan, an actor, was seated on the front bench of his visual communication classroom the day he watched his lecturer demonstrate the power of non-verbal communication using just his mundu—by folding it upto his knees (gameness), by folding it further up (rudeness) and by letting it down, the rim touching the heels in a full mast (respect). Once, during a shoot of the climax of the film, Yes or No, where he is chasing his nemesis, Manu was given the option of attaching a Velcro strip to his mundu but decided to decline the offer. “The mundu is an expressive piece of cloth, and I assumed that modernising it with belts or Velcro [strips] would tamper with its flexibility,” he says. During the shoot, with a knife in one hand, Manu laboured his way across the shallow banks of the Meenachal river, perfecting his facial expressions of wrath when he noticed something familiar drift ahead in the river—his mundu.

Cinema is not alone in its love for the mundu. Musicians like Raghu Dixit of the Raghu Dixit Project and Tony John, backing vocalist for the Kerala band, Avial, are never seen on stage in anything but a vibrant mundu. “I sing in Malayalam and it only seems fair that I also wear clothes that my language and heritage proudly upholds,” says Tony, who has come up with his own answer to common mundu woes—he wears a pair of shorts which he then uses to tuck in the disobedient mundu.

There are also fashion designers like Mumbai-based Rahul Mishra who have experimented with modernising the mundu. In a 13-acre handloom village established in the 1800s in Balaramapuram, Kerala, Mishra, mentored by Padmashree P Gopinathan, a master weaver, explored the possibilities of transcending the lifespan of the mundu. “My idea was not to change how the original unstitched cloth was, but to increase its consumption and to save the traditional weavers from shifting careers into masonry and plumbing. I try to keep its sanctity by using classic material while crafting a modern clothesline,” he says. His shows ‘A Ray of Light: A Kerala Collection’ (2006) and ‘Weaves Sow, Yields Bloom’ (2012) made efforts to globalise the fabric. In 2009, Mishra made fashion headlines for designing a reversible dress with a mundu on one side and a Banarasi design on the other.

Attempts to revive the appeal of the mundu are visible even in century-old handloom shops like Karalkada, who have come up with exclusive labels and a separate studio, called Weavers Village, to reach out to youngsters. Shobha Ashwin, who runs the three-and-a-half year old spinoff enterprise, is trying to prove that a mundu is not boring. The ‘Bodha’ series comprises of various one-of-a-kind mundus dipped in ayurvedic dyes, spices and medicinal herbs, ranging from turmeric to neem. In a short span the new studio has an impressive clientele comprising actors, politicians, dancers and musicians. “A lot of celebrities were spotted wearing our Bodha collection. These include Shashi Tharoor, Shayaz Anam and Tony John. We usually pick themes which give us the scope to experiment with colours, designer karas and various prints. The Theyyam collection titled Kallam incorporated the fierce and loud colours of the art form,” she says. At Weavers Village, women have a choice of mundus. A cross between a mundu and a palazzo, they come in earthy shades, with a naada to secure it in place. “We are now trying to expand our clientele. Our next project is maternity wear made from the mundu fabric,” adds Ashwin.

For as long Vipin Lal remembers, he has witnessed his father’s morning practice of getting into a starched kasavu embroidered cotton mundu, lifting his shirt and wedging it under his chin while tightening the knot around his waist. The ones that were ripped or soiled would soon be replaced with another, strikingly similar one. But when it was time for Vipin to wear the mundu himself, he needed to fish out half a dozen safety pins from his mother’s dresser. “Wearing a mundu is a good way to get rid of belly fat, though. I was so conscious that my stomach kept contracting and convulsing. I tried the Velcro version a couple of months back after a bout of advertisements and it is a saviour,” says Lal, a BCom student, who was a part of a tug-of- war game during Vishu celebrations this year. “It stayed put despite all the towing, movement and stampede.”

Not everyone is convinced, however. Some time ago, Louis Thomas Ollekkengal was rummaging through his wardrobe when a folded brown cloth, neglected and forgotten, came tumbling from above. He tried it on and paired it with a methiyadi, strapless wooden sandals, before posting an image on Instagram with a caption that read, ‘Although I must admit, whenever I wear the mundu, I am always in constant fear it may fall off and show my boxers, but I must say it makes me feel extremely proud of my Malayalee roots. Free and airy come a tad second and third respectively!’ But the new Velcro variant that guarantees a carefree walk, fails to excite him to the same extent. “I guess I am more of a purist in that sense. I would rather wear a belt than buy something of that sort even if it promised pockets,” says Louis, who is based in Pune and cribs about the lack of venues where you can wear a mundu in the city.

Despite its identity crisis, the Velcro mundu is gaining popularity. On an average, Ramraj makes and sells 5,000 pieces of it every month. I track down Madhu Chettan, a toddy tapper for the last 31 years who tells me he started wearing a lungi—the daily wear cousin of the mundu—before he turned ten and climbs trees wearing them. He has never heard of a belt or Velcro mundu. “Ayye, why would anyone need to wear something like that? Next thing you know, you will need to be taught how to use a thorthu (towel) as well,” he jokes. His lungi is folded neatly, a vettukathi (knife) hooked onto it dangling from his waist, weighing it down. “Judge a man by the firmness of his mundu’s knot,” concludes Ramraj.