Mud on the Menus

Farm-side dining comes centrestage in America, making star chefs plant eateries in the fields, next to the ingredients 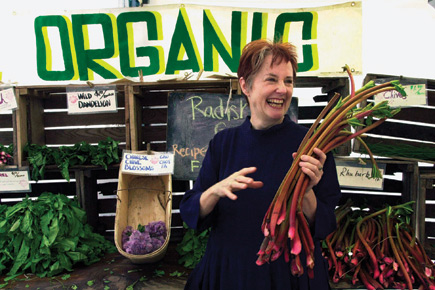 Farm-side dining comes centrestage in America, making star chefs plant eateries in the fields, next to the ingredients


Is there something rotten about the state of our fine dine foodies? How many put greed on pause at the latest noshery to consider the provenance of their sushi and New Zealand steak? Foods, which are basically deep frozen cadavers, that get customs clearance before being tossed into restaurant freezers? After this, eaters still asininely ask if the sushi “is fresh”. Duh?

But then who’s ever heard the truthful reply: “yes, just thawed”. In contrast, chefs in America are shrinking the distance between ‘farm to fork’, orienting themselves to ‘locavores’, people who are ferociously voracious about food farmed within their vicinity.

With ethical appetite ruled by ‘food miles’ which pinpoint the distance that produce has travelled, farm-side dining is a natural offshoot, making star chefs plonk their expensive eateries by fields. So now unlike their city counterparts, these chefs have mud on their minds and menus.

Ingredients, rather than being flown in, graze and grow outside kitchens, turning air-miles into a few muddy footprints. This earthy movement pioneered by Alice Waters at Chez Panisse, California, has come to full bloom at en vogue eateries like Blue Hill, New York, where veggies like fiddlehead ferns come to the table with their roots almost twitching. Chef Peter Hoffman’s reverse cultivation has put beehives on roofs of skyscrapers in New York City.  Others have gone further afield in Tennessee and Georgia.

Tagging this as the ‘plough to plate trend’ Gourmet magazine once produced farm-restaurant hotlists. Time magazine has feted Chef Dan Barber in its Most Influential People List.

Eager eaters are out there, some with stilettos sinking in the earth, discovering a burst of heirloom tomatoes or how young grass changes the flavour of meat. Unlike us, who’re still stuck at exterior tastes such as ‘rosemary on lamb chops’.

Since we can’t suggest you fly out (those count as food miles), here’s some of America’s haute-farm-restaurants. Including one where the Obamas dined. Get dressed only if you fancy menus which read like pricey farmers’ manifestos.

Move over Anthony Bourdain. Dan Barber is America’s newest food champion. He’s been on Top Chef, has won this year’s ‘Food Oscar’, the James Beard Award and fed the Obamas. That’s a lot of titles for a chef who went pro in May 2000.

Barber’s Progressive American cuisine is a modish farmer’s feast that showcases his artistry in balancing ingredients, public health and community. The farmy-feel runs strong, with appetisers like This Morning’s Farm Egg. Tomatoes On A Fence features vine-ripe (rather than picked raw and transported on trucks) heirloom tomatoes moistened by ‘salt-dew’.

Simplicity is paramount. All so stellar ingredients from Stone Barns, the Rockefeller-funded farm and restaurant run by the Barber siblings in upstate New York, can play out like an opera on your palate. Besides organic veggies and hand-milled grains, the ‘pasture-raised turkeys, non-stressed Berkshire hogs, and humanely raised lamb’, all sound like they had Zen-lives before being bopped on the head and plated. Don’t hurry, Barber is running to packed houses.

HOW KINCH CLINCHES IT

Spain is the New France, with chefs Ferran Adria and Juan Mari Arzak ruling over epicureans. Echoing this in Los Gatos, California, David Kinch has been plating Spanish cuisine with contemporary California-style. At Manresa, his two-star Michelin restaurant, named after a medieval Spanish town, he’s “tightening the closed loop between guests, the garden and haute-cuisine”.

He’s also partner of Love Apple Farms, which grows biodynamic vegetables. The steeper level after organic, biodynamic farming requires pure air, water and sun. It’s also ruled by astrology and ‘stuffing rituals’, such as blossoms in a deer’s bladder to be buried underground. Love Apple gets almost 100 veg-varieties from this veggie-voodoo.

To match his pedigreed produce, Kinch takes black cod (made famous by Chefs Nobu and Morimoto), singes it in a plancha (Spanish grill) and stirs California snails in garlic and parsley. That’s why some gourmets are bypassing Lyon, the food capital that was supreme till recently.

Unlike Christ and Madonna, the halo around Alice Waters appeared about 40 years before her crucifixion. She’s the organic food pioneer who showed America that fresh green beans come from fields, not cans; taught parents to pack health into kid’s lunchboxes, brought farmers centre stage and got supermarkets to shove off.

Now she’s nailed to a culinary cross, with Anthony Bourdain casting stones on her, likening her food-activism to the Khmer Rouge. New York Post accuses her of being  a junk-food-prohibitionist. It’s a sign of the times, swear her admirers, since recession prohibits big-spend on the pedigree ingredients on which Alice insists.
That hasn’t stopped pilgrims (like Dalai Lama) from coming into Chez Panisse, a landmark in Berkeley, California. The organic restaurant serves Cannard Farm Grass-fed Dexter Beef and Caramel Profiteroles With Suncrest Peaches. Closer home, Goat Cheese Salad comes to us via Waters. Perhaps that’s as close to Chef Alice as we will get.  Reservations aren’t easy.