Flying aboard a notorious carrier along the Himalayas, exulting in its grandeur while hanging on to dear life 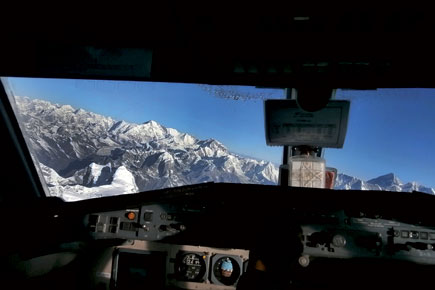 Flying aboard a notorious carrier along the Himalayas, exulting in its grandeur while hanging on to dear life

On a cold November morning, a little after 5 am, I find myself sitting in a damp and dingy room, guarded by men in military fatigues. I am at the domestic terminal of Kathmandu’s Tribhuvan International Airport, set to fly as glorious a flight as there ever could be. Yet, in the pre-dawn darkness of the city, there was nothing to suggest it except perhaps the cold mountain air I was breathing. I was to take off from Kathmandu in a small plane, head east, and fly along and over the Himalayas, the pièce de résistance being to come face-to-face with Mount Everest itself.

At the airport, hands clamped around a steel glass of tea to keep me warm, apprehension on my face revealed by the terminal’s tubelights, I sit alone on a bench considering what I am doing. Nepal is notorious for plane crashes. Every few years, some flight or the other overshoots the runway or flies into a mountain. Experts suggest that this is largely because of lax safety standards, inexperienced pilots and the area’s harsh weather and mountains. And here I was, ready for airborne intimacy with the world’s greatest mountain range.

“Don’t worry,” a devious-looking travel agent had assured me between sips of tea and loud chuckles the previous evening, “I give window seat. Even if you go down, you get good view.” I learnt from him that just a year or so ago, a similar flight taking passengers for a Himalayan view had crashed into a mountain on its way back. “We don’t know,” he said of what happened, “Sometimes flights carry more weight and luggage than allowed. Sometimes, hills just appear.”

I had brushed aside the travel agent’s words as an attempt to romanticise what was essentially an hour’s flight with a good view. Yet, as I reached the airport at 5 am as mandated for a 6.30 am flight, my mood began to darken. Maybe it was the malfunctioning screening machine, almost empty airport (nobody takes reporting time seriously here), stench of urine from a nearby toilet and monkeys waiting by windows to be fed by tourists. Whatever it was, I suddenly felt certain that I had booked a first-class ticket to a Himalayan tragedy. I felt something cold and heavy in the inner recesses of my stomach making its way up, leaving my organs a quivering mess, to eventually form a lump in my throat. So when a tea vendor turned up with a kettle to ask if I’d like some, all I could squeak was ‘please’.

In some time, passengers start turning up to catch assorted flights. There are Europeans, Americans, South East Asians and some Indian families filling up the small terminal with the sound of different languages. Many of them are headed for Lukla, a high-altitude airport that is considered the world’s most dangerous; with its sloped runway said to be just about 20 metres wide and 460 metres long, the slightest miscalculation could mean tumbling off a cliff. From there, some will try to climb Everest.

But while small planes bound for Lukla take off one after another, my flight continues to be delayed. There are around 15 of us waiting for the Himalayan tour, including an American couple, a group of European youngsters who seem German, some Englishmen and a lone Japanese tourist. A display screen above a Ramen advertisement keeps us posted on the flight’s status, listing heavy air traffic as the delay’s cause. Later, an airline official explains that the weather is not conducive for a mountain flight. It turns out that Kathmandu’s air traffic controllers rely on Lukla’s for reports on weather conditions in the higher reaches.

We wait at the terminal, and, through a window, watch a dark mountainous morning break into a glorious dawn. Just as I begin to wonder if the flight is cancelled, a woman hurries towards the boarding gate, shouting, “Aau, aau” ( ‘Come, come’ in Nepali). The flight had got an all-clear and the aircraft was ready. Packed like mules in a groaning ramshackle bus, we are taken from the terminal out onto the tarmac. I see several aircraft, but no Yeti Air plane I am waiting to board, until someone yells, “Look. There, there.” We follow the pointed finger’s direction to see, obscured behind some buses, a small white aircraft with a green belly bearing the ‘Yeti Air’ logo. As the buses leave and I catch a clearer view of the Jetstream 41, that cold and heavy something makes its way up again, twisting and twirling my insides.

On some flights in Nepal, seat numbers don’t matter. Passengers just run to the aircraft, elbowing and pushing each other to get their seats of choice. However, here, either because of the lone air-hostess’ matron-like demeanour or the passengers’ docility, we take our allotted seats. I get a window seat to the right of the plane and the air-hostess comes down the aisle with a huge cotton ball for passengers. I take a clump of it, roll it into earplugs and fasten my seat belt, and then without warning, with a fit and start, the aircraft accelerates down the runway and takes off.

From my window, I see Kathmandu level out and become a row of neat lines and formations. Hills appear and disappear in the morning sky, as we go around and over them, climbing rapidly. The aircraft rattles as it enters one monstrous cloud after another. If someone were to see us from another aircraft, it may look as if we are being eaten and egested by clouds.

At around 21,000 feet in the sky, the air-hostess appears once again from the back rows, this time ordering us to “look to the left” for “Gauri Shankar”.

All heads turn to the windows on the left of the aircraft. I take a deep breath, and crane myself to look past the American woman sitting on my left. All I see through the window across the aisle is heavy fog.

“No, no,” says the air-hostess as she grips the American woman’s neck and turns it so hard to the left that I fear it might snap.

And there we see it—a tall pointed peak, surrounded by clouds and other mountains but visible closer than ever before. As the plane moves closer, an extended stretch of the mountain range comes into view. Almost brooding over spotless white clouds, the Himalayas appear neither of earth nor heaven.

We fly over icy mountain peaks as if in touching distance. One by one, we are allowed into the cockpit for better viewing. When my turn comes, I find two young pilots, one of whom is taking a photograph of the range with his cellphone. In conversation with the pilots, I want to ask if they shouldn’t be focusing straight ahead instead. When I ask where Mount Everest is, one of the two points it out. And there, just 10 nautical miles away, I see it: a streaming white peak glowing in the first ray of morning light, the highest place on earth, dark and shadowy on one side and magnificently lit up on the other.

The plane swerves. Its left wing dips alarmingly, while the right comes up. I hold on to the cockpit door and realise that the pilot is merely turning around. It is time for the right side of the plane to get a view of the Himalayas. I make my way back to my seat and see a gorgeous sight. Below me is the Himalayan range, some mountains lathered in snow, others dry at their base, and right in front of me, all of the Himalaya’s famous peaks over an army of clouds, lining up as if for an early morning drill inspection: the Makalu, Lhotse, Everest, Gyachungkang, Gauri Shanker and Shisha Pangma.

A few minutes later, I hear the Japanese man speak to the air-hostess. He feels cheated that the plane didn’t land in the mountains. But I pay little attention. I have other things on my mind.

I sit upright and grip the armrests tightly. For the aircraft is suddenly losing altitude and I have realised that the pilots are aiming for the runway.