Call this a far-fetched analogy if you will, but I am given to believe that the Indian penchant for all things ‘phoren’ stretches beyond the realm of human existence to the world of flora and fauna as well. 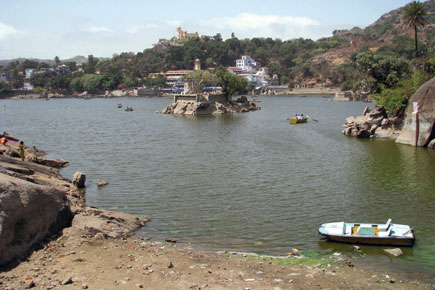 
Fodder for this stream of thought came in the shape of a large tin-roofed, brick-n-mortar structure that has come up in the last 12 months on the banks of Nakki Lake, Mount Abu’s largest water reservoir and arguably its most popular tourist spot. A large signboard hanging on it proclaims that it houses Datda Sea World, supposedly India’s largest aquarium.

It will house exotic-looking fish from far away waters while desi fish struggle to survive in Nakki Lake. A lake that has grossed substantial revenue for the municipality, from the contract to let out its boating facility, but still seems to have been taken for granted.

On the other hand, you have a business proposition. Even if a fraction of the one and a half million tourists who holiday in this hill station every year visit ‘India’s largest aquarium’, the revenue amassed would be a sizeable sum.

It’s sad, but as they say—money makes the world go round. In Mount Abu, the lake has had a raw deal at the hands of the municipality in recent times. In the last year or so, a decision to reclaim a part of the lake has given many a mother duck and her ducklings reason to raise their hackles. Clean-up operations are limited to sporadic attempts to pick up floating pieces of refuse. Over the last decade, on the far side of the lake, slums have closed in into the erstwhile catchment area of Nakki. Leakages from two drains passing near the lake have also contributed to the murkiness of its waters.

You would have thought that a municipality dating back to 1864 would have got its priorities right by now. No such luck. Its energies and monies are uselessly spent on partially funding the construction (base slab) of the new aquarium and installing decorative lamp-posts in addition to the streetlights dotting the lakeside (most of the new lamp-posts have since been vandalised by monkeys). All at the cost of a dying water body.

In the meanwhile, Sea World has opened its doors to the public, though it is still under construction. Regardless, its claim to be the largest in India was ruled untrue by two members of my party, who had visited Taraporewala Aquarium in Mumbai in their childhood. At present—no thanks to the ongoing construction work—it hardly merits a visit, even if some of the poorly crafted individual aquariums are home to colourful angelfish, bubble eye fish, goldfish, water turtles, sucker catfish, guppy fish and so on. The fish look sad in their ‘under dressed’ aquariums.

But, it takes very little to please some people, especially low-end tourists (pardon the business speak), for whom paisa vasool (money’s worth) is an outcome of the number of stops the tourist bus makes. For them, a walk through any aquarium would be good pastime.

Few tourists opt out of package tours, which are carefully crafted to showcase the best of a destination. Of these, fewer still do more than aimlessly wander around, soaking in the colours and sounds of a new place. If only they had the time and interest to nose around, engage in discussions with local residents and learn about the issues plaguing their lives, they might learn about the need for the creation of a sewage treatment plant to halt the influx of ‘nutrients’ that are choking the lake, or for the relocation and rehabilitation of slums to an area outside Nakki’s catchment area, or even for improvements to the solid waste management system of the town.

Apparently, this wish-list will be fulfilled (it is uncertain whether wholly or partially) if a comprehensive lake conservation proposal made by the municipality to the Central Government is approved. According to the chairman of the municipality of Mount Abu, a lot of remedial measures are in the pipeline.

Not for nothing do they say that India is one of the most happening places in the world today.