Land of the Buddhist Dead

The first empire in India was founded here, but Rajgir has little to show for it 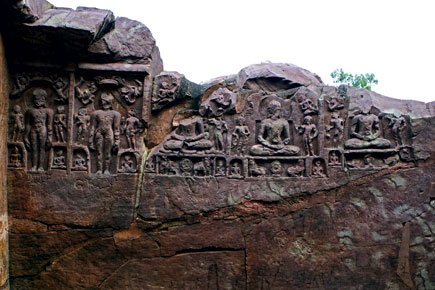 The first empire in India was founded here, but Rajgir has little to show for it


In the middle of an endless plain, two rows of mountains run parallel before tapering together. In between their hollow is Rajgir. There is little there now—ruins, monuments or tongas—but you can try imagining a kingdom that once was. You do not clearly know what it looked like because the archaeological record is scant and what is written was written centuries after Rajgir became larger and larger until its people were forced to move bag and baggage to a bigger capital and then Rajgir grew smaller and smaller until it disappeared. But 2,600 years ago, this was where the first empire of India, the Magadhan Kingdom, first took its fledgling steps. The idea of India has its embryonic beginnings here.

A narrow road, in a cleft between the mountains, leads into the valley, snakes through it and then emerges at the other end. Once in, the hillsides rise to the skies on either side. This was the capital because it was a natural fort. From the security of what are called cyclopean walls, through conquest and trade, Magadha spread its tentacles northwards and eastwards. As it expanded, the capital moved to Pataliputra, from where Emperor Ashoka later brought the peninsula under one banner. On top of the hills, in a straight line travelling along with it are remains of a wall that go on for kilometres. It is so wide that you can walk on it.

Last December, in Rajgir, the nights came in with biting cold by five in the evening. The days were bleak, melancholic but snug and lovely. When there was no sun there was fog. Of that kingdom and age which brought the ancient religions of India into being, I saw nothing but fragments. There was Vulture’s Peak, the meditation spot of the Buddha, from where a row of prayer flags went shooting forth; the Grove of Jivaka, court physician of the time, though there was no grove, just an empty yard; the prison of Bimbisara, though there was no prison, just a square of stone blocks abruptly lopped off by time. There were caves of Jains because Mahavira had made his home here; the Buddha, on the other hand, was just a regular itinerant who started his career here and then took a transfer to Sravasti, the centre of India and which Magadha would gobble up soon. The sramanas of the age would come to Rajgir, debate in the market square and meditate in the hills. When the rain floods turned the trade routes into swamps, they would make this place their monsoon retreat. And of all that, there was nothing but fragments you instinctively would not trust.

I stayed for two days in Tathaghat Vihar. I had booked a room online, paying Rs 892.50. It was a government guest house converted into a hotel. Just liveable. If you have the money, there are two five-star hotels there too, largely catering to Japanese tourists. For the weekend, I had to move out because there were no rooms available anywhere in Rajgir. That is when domestic tourists from the rest of the state come here.

I went to Bodh Gaya, about 70 km southwest, which had innumerable small and dingy hotels. For a man without faith, I realised, temple towns can be interesting for 30 minutes. After that, there is only the suffering of time. I went again and again to the monasteries there, set up by believers from various Southeast Asian countries, that pepper the town like embassies do in Delhi.

The Mahabodhi Temple is crowded, but, by some miracle, spotlessly clean. And quiet. A large gathering of Tibetan monks was holding a convention behind the temple. I could not understand a word and spent my time looking at the tree under which the Buddha is believed to have gained enlightenment. It seemed unlikely that it was the same tree.

On Monday, I returned to Rajgir and this time stayed in another government guest house called Gautam Vihar, paying just Rs 450 online. It was the largest hotel room that I had ever seen and the hotel itself was like a ghost bungalow of an old black-and-white movie. It was crumbling into itself, and yet the wood and linen suggested that half a century ago, this must have been palatial. Now it was a dump. I was charged Rs 450 because there were no heaters. And no one knew how to turn the hot water on. There was a family staying in a room nearby and I heard them leave. At night, the electricity failed and there were ghosts in the dark who went away once the lights came back on.

While returning to the airport the next day, the driver told me that his father and brother had been shot dead by carjackers. He had then been forced to get into the taxi business. He had been forced to marry his brother’s wife and had raised her children to become engineers. Life had moved on. That evening, in Kerala, I got a call from him enquiring whether I had reached safely.