Call yourself a Net junkie? Proud of your online network? Be afraid, be very afraid. Web addiction is recognised as a clinical disorder. And you need to detox before you log on to life again. 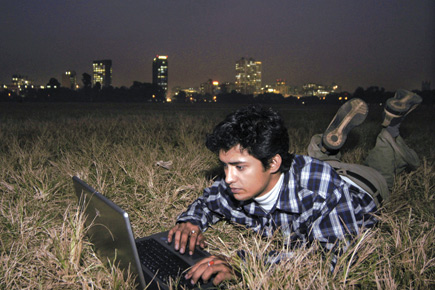 A new kind of junkie is seeking therapy: the internet addict is going into rehab.

In a city more than 1,000 km away, Santosh Kumar (name changed), a 24-year-old software programmer, refuses to discuss his weekly therapy sessions at Recoup, a neuro-musculoskeletal rehabilitation centre in Bangalore. Kumar suffered from severe insomnia, depression, short-term memory loss and was very low on self-esteem. He couldn’t cope with relationships. But most worryingly, he had lost his job. Kumar was put on medication and during his four-hour weekly sessions at Recoup he was given relaxation training, cognitive behavioural therapy, and classes in yoga and Tai Chi.

Arnab Chatterjee, a construction company executive based in Kolkata, was so addicted to his laptop that his high-school sweetheart called off their engagement. The 27-year-old vivacious guy was popular with friends and family until even a year ago. Today, he’s almost a recluse.

“I feel disoriented without my laptop, as if I’ve lost my limb or my connection with the rest of the world. I need it with me, open and online, always. I can do without my friends, but not without my laptop,” he says. Chatterjee now visits a psychiatrist twice a week.

The process of re-sensitising patients to people, re-awakening them to their environment and re-stimulating them to their survival instincts can take up two-three months of therapy. The next six months to one year would involve regular weekly sessions of behavioural therapy, family counselling and encouraging the patient to take up a physical activity.

India does not have South Korea-style internet addiction counseling centres across the country, nor has it recognised, as China did recently, that internet addiction is a clinical disorder. Of course, Net penetration in India (a little over 5 per cent) is not as high as it is in South Korea (70 per cent) and China (19 per cent). Still, India makes it to the top five countries in number of internet users after China, the US and Japan.

And so the risk of Internet Addiction Disorder (IAD) is not alien to India. While only the extreme cases may make it to doctors’ rooms, increasingly long hours spent in cyberspace—at work, at home —is beginning to bite.

In early 2007, IIT Bombay created quite a stir on campus when it imposed an internet ban in hostel rooms after 11 pm. The faculty had begun noticing a dangerous fall in attendance and slide in student grades. The dean of student affairs reported that 900 students had become addicted to the internet, spending all night gaming, chatting, blogging and downloading files. An early omen came in 2005 when a fourth year student, well-known on campus as a networking wizard, hanged himself after he failed three courses for lack of attendance.

In 2006, Anil Chawla, a 1980-batch student, wrote an open letter on the effect of access to unlimited broadband on campus life to the director of IIT Bombay, after he spent some time with students. Chawla refers to a popular online game on the campus called Counter-strike. “I was even introduced to someone as the invincible champion of Counter-strike. I tried to talk to this guy. It was futile…. His conversation was limited to monosyllables and shaking of the head, like a zombie’s.” The Counter-strike champion is a reflection of the new crop of IITians—“good at the mouse but very bad at almost all human interaction skills”, says Chawla.

Little wonder then that more and more students are spending time with their counsellors. “Rehabilitation involves a combination of family therapy and vigorous counselling thrice a week. Some parents too were given accommodation on campus to keep closer watch on their children,” says Amita Tagare, student counsellor at IIT Bombay. Parents have to be ‘naively educated’, says Tagare. The addiction has to be handled not with strict dos and don’ts but by drawing the student gradually out of his dependence.

American pyschiatrist Jerald J Block, who wrote an editorial in the American Journal of Psychiatry (‘Issues for Diagnostic and Statistical Manual of Mental Disorders (DSM)-V: Internet Addiction, 2007’) on why Net addiction merits recognition as a distinct mental disorder, warns against sudden and complete denial of access.

‘I urge a great deal of caution when parents or others want to abruptly ‘cut access’ to computers. This can generate a tremendous amount of rage,’ he writes, replying to an email interview, incidentally from Beijing, where he has been invited to to talk on the same topic.

Block says building an alliance with the patient is foremost to avoiding a premature end to treatment. ‘Patients need to see the treatment as something that can help them with their goals, which are often different from the physician’s.’

There is no doubt any more that IAD can be as debilitating as alcohol or drug addiction. And it is a concern that has gripped, ironically or perhaps logically, online communities and bloggers.

For instance, unplugyourfriends.com, a viral by Meet Up—a social network that mobilises local communities in the real world—provides a humorous and warm-hearted way for users to reach out to their addicted friends. The intervention email, as it is called, captures the absurdities of the life of a screen addict, where even laughter is reduced to an instant message: LOL (laugh out loud). The email ends by saying, ‘I miss you. The world misses you. You need help.’

Meet Up, a 5 million member strong group spread across a hundred countries, was started Scott Heiferman in 2002 in the US. It was started by essentially to revitalise local communities and help people self-organise, says Karina van Schaardenburg, a research analyst at Meet Up. But in times of hugely popular virtual communities like Facebook and Myspace, the relevance of human networks are obvious.

“Getting people to meet each other face-to-face is an obvious but powerful solution. A knitting group or a sailing group may not seem world-changing, but in a world where so many people are behind computers all day, meeting people face-to-face is itself revolutionary,” says Schaardenburg.

Javed Husain, a professor of physics at Aligarh Muslim University, is an organiser of a Meet Up community on nanotechnology in Delhi, which has 24 groups. “This social network is different in that it involves physical meetings. All other popular social networks are virtual. Though I have managed only four or five meetings in the past year, there are more active groups like the Writers group,” says Husain.

Another virtual helping hand comes from the blogosphere, teeming as it is with kindred spirits sharing tips on bringing back some sanity into their lives.

One such potential addict-on-the-mend is Mohamed Sanaullah, an engineering student at National Institute of Technology at Suratkal in Karnataka. His obsession with the internet began eating into his study time, so he has found what he hopes is the magic drug. “PageAddict (pageaddict.com) is an application that sits on FireFox explorer as an extension. It enables you to limit the Internet browsing time,” explains Sanaullah. “When my time is up, I am greeted with a message that says ‘Get back to work!’ and page access gets blocked.”

Hopefully, Sanuallah will continue with his new found self-disciplining tool. Perhaps, a good start for those who still need convincing could be a visit to the Centre for Internet Addiction Recovery. The good news is, it is online (www.netaddiction.com).