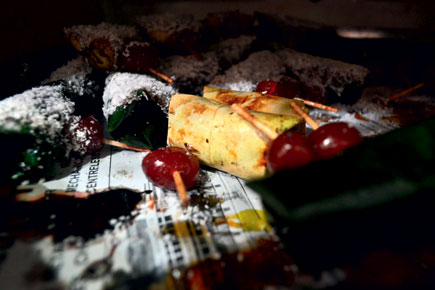 A very expensive paan formulated for an extraordinary purpose


Mohammed Sarfuddin Siddiqui is 66 and not much of a listener. He has, shall we say, the gift of the tongue, and usually holds forth on various subjects with strong opinions. For someone who runs a paan shop, there’s a lot of wisdom he spouts, much of it gathered over the years from interactions with customers who span the hoi-polloi and the rich. Tara Paan Centre, which Siddiqui owns, has been in business for three decades and is as famous as some of its customers. After Ajanta and Ellora, some say, his shop is Aurangabad’s best known landmark.

So, when this tall, white-bearded man popularly known as Sarfubhai gets tongue-tied, it is a surprise. The object of his discomfort is my question on his Kohinoor Paan. At Rs 5,000 a pop, it is a paan whose price you will find hard to match. It’s also, says Sarfubhai later, a paan that has travelled the world and been eaten in Dubai, Jeddah and Kuwait. There was once a time when bundles of Kohinoor Paan would be air-freighted to these countries every morning. But that is in the past now and Sarfubhai blames it on air travel security measures. “The airport security opens the bundle and checks the paan. They mess around with the way it is tied. It spoils the ingredients. So we decided not to export it,” he says.

I had been chasing Sarfubhai a whole week for an interview. I was curious about a paan that people paid Rs 5,000 for. What could possibly justify a price like that? At the end of a 600-km journey from Mumbai to inland Maharashtra, I discover why: the paan, sold in pairs for couples, serves as an aphrodisiac. “Ab aapko kya bolun,” he says, in search of an appropriate set of words, “Iss paan mein bahut taakat hai. Doh din tak effect chalta hai (What do I tell you…there’s a lot of strength in this paan. The effect lasts two days).”

“Sales of Kohinoor have outdone all expectations,” Sarfubhai says, “I did not expect such an expensive item to sell so much.” Chewing on a paan himself—hopefully not Kohinoor at this time of the day—he darts glances here and there before offering a sociological explanation for the success of his priciest product: “I have realised that most men are constantly in search of virility. When affection between couples is lost, they need such props to help them in the bedroom.”

Simplistic views on sexual vigour aside, it’s safe to say that his own discovery of the betel-leaf-wrapped secret had nothing to do with any loss of affection. It was 22 years ago. He had just got married, and his mother wanted to ensure that he wouldn’t disappoint his wife. “My mother loved paan,” he confides, “She was instrumental in getting me into this trade. On my wedding night, she gave me a paan and told me to experience it. The next morning, she asked me if it had worked. She then asked me to start selling it.”

Under his mother’s tutoring, Sarfubhai sold his first Kohinoor pair for Rs 10,000. “It was meant for Nawabs and the leftover royalty who knew its worth. The aphrodisiac effect would last for 10 days. Slowly, it grew popular.” Down the years, the prized paan picked up more ingredients that varied by the specific needs of customers. Sarfubhai says he has a team of 23 employees who turn out paan of assorted kinds today, but the Kohinoor is still made by him and him alone. It’s a trade secret he guards zealously, with the ingredients kept in a backroom brass box no one else can touch—and mixed in the presence of only one other trusted employee.

The list of regular Kohinoor clients is also kept under wraps. Demand, Sarfubhai volunteers, tends to spike during the wedding season. Clients rarely ask for this paan if there are other customers around. Openly asking for an aphrodisiac, after all, can attract raised eyebrows if not outright glares. And he says he takes care to discourage lascivious behaviour that may be inappropriate: “The first question I ask them is if they are married. If yes, I ask what they are looking for. If it’s not [appropriate], I reduce the ingredients fractionally, as I am not in favour of pre-marital or extra-marital relationships.”

A pair is typically sold in a colourful pack with three compartments. The male paan differs from the female one. Apart from other secret ingredients, the male version contains agar, a liquid fragrance found only in Bengal that costs around Rs 7 lakh per kg; mush, a Rs 70 lakh per kg musk; gulab, which costs Rs 80,000 per kg; and saffron, the Rs 2 lakh per kg Kashmiri variety of zafraan—wrapped in Kolkata’s famed meetha paan patta. In contrast, the female version has, among other things, safed musali, a root commonly used as an aphrodisiac that costs Rs 6,000 per kg; saffron, again the Kashmiri kind, though in a much smaller quantity; and gulab—wrapped in the same paan leaf.

Why the difference? Sarfubhai has his own sexist theory of what it takes to get men and women going: “The man needs a potent paan, while all the woman needs is something to get her a little charged… Women generally do not participate much in the bedroom process, but the paan helps them be equal partners in desire.” His words are punctuated with long silences—and “Tum samajh rahe ho naa (you do understand, no?)”—as he searches for ways to articulate himself. He confesses that he has rarely ever “openly” discussed such matters with a woman, not even his wife.

The Kohinoor pack also contains a bottle of musk-scented ittar (in the third compartment). The paan itself comes encased in gold foil with strict instructions: it must be eaten by the couple two hours before the intended action. In the interim, both partners must liberally apply ittar on themselves, the pillows and bed. Do not spit the paan out, for it needs to be consumed completely.

The Kohinoor formula may have been tweaked several times down the years, but Sarfubhai says there has never been a client who has not come back for more. And he issues no bill for the purchase. Clients never ask for one. And are perhaps aware of his set of dos and don’ts. What he will not do, for example, is make me a sample. It is against his “principles” to “deal directly” on such a transaction “with a woman”.