In Search of the Perfect Condom 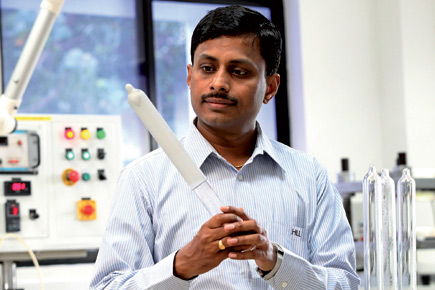 In the history of sex, men have fashioned condoms out of oiled silk paper, leather, used horns and tortoise- shells. They have found use for animal bladders and intestines. They’ve designed condoms that sheath the entire male member and some that cover just the head. They’ve improved upon material and design at each stage, despite the ire of the Church and conservatives, to find that delicate balance between pleasure and protection.

Today there might appear to be a plethora of textures, but the truth is that the condom has seen little improvement in the last century. Since the mid-nineteenth century, when man learnt to process natural rubber and make it elastic, condoms have more or less always been rubber-based. It is not just the lack of better options; the condom, even with the help of modern branding and its various ribbed and flavoured avatars, is still beleaguered by that timeless conception that prophylactics make sex less pleasurable. And many times, couples are therefore known to forgo them, despite condoms being the best known agent against STDs or pregnancy.

“But science,” says Dr Lakshminaray- anan Ragupathy, a polymer scientist working with HLL Lifecare Ltd, the largest producer of condoms in India, “is not about best-known agents. It is about finding the best. If people don’t use condoms, either because they are inconvenient or no fun, it is probably because we are yet to design the best condom.”

Ragupathy, under the aegis of HLL Lifecare Ltd, assisted by two other scientists in a Thiruvanthanapuram laboratory, is trying to build what he calls the second- generation condom—one made of graphene. “If we achieve this,” Ragupathy says, “it will either change the world of contraceptives, and thus safe sex as we know it today, completely, or fail miserably. It is just one of those ideas.”

Graphene was first produced in a laboratory in 2004. Long theorised but only produced a decade ago, graphene is a form of pure carbon so thin, that it is just one atom thick and two-dimensional in nature. Heralded as a wonder material that can change the world, graphene conducts heat 10 times better than copper, and conduct electricity 100 times better than silicon. It is transparent, extremely lightweight (a million times thinner than a strand of human hair) and very strong (200 times stronger than steel), yet flexible and elastic. Most scientists are exploring the possibility of using graphene in the electronics industry to make thinner, cheaper and more energy-efficient gadgets. Currently there are more than 7,500 graphene-based patents worldwide, for everything from smartphones to computer chips.

In 2010, when Andre Geim and Kostya Novoselov—the two scientists from the University of Manchester in Britain who first produced graphene—were awarded the Nobel Prize in Physics, Ragupathy was a research student at the same institution. “All around me,” Ragupathy recalls, “there was talk of this fascinating material called graphene. And I too became completely immersed in it, until I returned to India to take up the job of a scientist at HLL.”

Last year, when the Bill & Melinda Gates Foundation (BMGF)—one of the largest private foundations for global healthcare—announced a challenge for scientists to come up with a ‘next-generation condom’, in a bid to improve condoms so that more people would use them, Ragupathy came up with the idea of creating a condom that would be a mixture of graphene and latex. “The idea was to take all the properties that make graphene such a hot material—its thinness, its strength and its ability to conduct heat so well—and to use that to make a super- condom of sorts.” Latex condoms in comparison are thicker and poorer conductors of heat. Dr G Rajmohan, one of the co-investigators in this project, explains, “Imagine a condom so thin that you wouldn’t feel like you are wearing one. Imagine a condom so good [because of graphene’s ability to conduct heat] that you can feel the warmth of the [body].”

The BMGF selected the idea, along with ten others, and provided Ragupathy and his team with $100,000 to develop the condom. A further $1 million for clinical trials and development will be offered next year to those that BMGF considers most market-promising. Apart from Ragupathy’s idea, other selected ones include a condom that is made of beef tendons, one that allows the user to put it on in one smooth motion, a condom that gently tightens during intercourse, and another graphene condom being built by a scientist, Dr Aravind Vijayaraghavan, of the University of Manchester.

Claiming that the concept of his graphene condom is similar to the one being worked upon by Ragupathy and his team, Vijayaraghavan says via email, ‘There is a lot of work on graphene polymer composites for various applications such as structural materials and electrically- conducting materials. Graphene is known to add strength to polymer materials. The idea of mixing graphene with elastomers such as latex was therefore a natural extension of this, and the specific application of graphene-reinforced latex for condoms was developed by me based on these previous works.’

Last month, Ragupathy and his team were able to produce prototypes of their graphene-based condom. “Graphene is highly unstable in nature. But we were successful in mixing it with latex [for] prototypes,” says Dr A Kumaran, another co-investigator in the study. They were able to reduce the thickness from 0.07 mm, as is the case with most latex condoms, to 0.04 mm. Apart from making the condom thinner and more effective at transferring warmth—because graphene has a larger surface area in comparison with latex— the scientists also hope to load flavourings, anti-viral agents and spermicides onto the material of the condom directly. “Currently,” Kumaran explains, “if at all these agents are there in latex condoms, it is usually in [small] quantities and located in the lubricants of the condom, not onto the material itself. But with graphene condoms, we can add all these masalas onto the material, making it safer and more effective.” He says, “It is going to replace latex, like how the flat screen is replacing the [cathode ray] TV.”

Dr Ayyappan, chairman and managing director of HLL Lifecare Ltd, claims that irrespective of whether their idea gets the second grant from the BMGF, the company will pursue the idea to its logical conclusion. “Condoms, especially in India, have always been marketed as a family planning method. But with this, because its premise is to make sex more pleasurable— and safe—we will push it as something that improves sex.” Claiming that it is still early days for the project, Dr Ayyappan expects the condom to take at least another two years to hit shop shelves. “The great thing about this condom,” he says, “is that if it works, and so far it has met every expectation, it will revolutionise the global contraceptive industry.”

According to Vijayaraghavan—who has been working on multiple graphene- related projects ever since the material was first produced—people have been wondering how it will be used in their daily lives. “Currently, people imagine using graphene in mobile phones, electronics, food packaging and chemical sensors,” he says. But if this works, graphene will literally touch our everyday life in the most intimate way.”