In Search of Muziris

Travelling back in time for a Roman holiday in Kerala 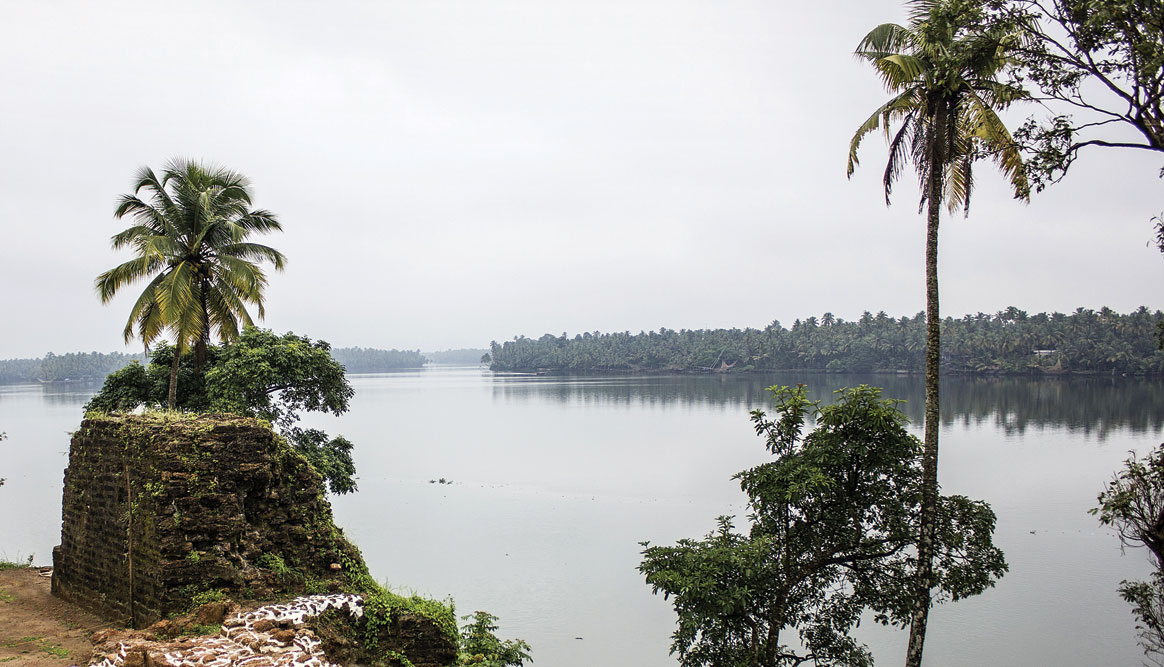 MY HALF OF the window has a fake mist. On the other side, the sun reigns. I have taken this five-hour train ride to Ernakulum several times in the past five years, always knowing what to expect of the city. This time, I have to sift through my memory to choose an image that might suit the uncharted stop I am aiming at. Ancient rubble spat out from the earth’s gut, shovels leaning on makeshift tents, Harappan steps leading down to a great bath and other scenes cross my mind. I picture a prosperous city swallowed by water and forsaken to the elements. It could be William Watson’s Ballad of Semmerwater that we are talking about. Muziris is equally fabled as a wealthy seaport of the first century BCE. It finds reference in ancient literature but vanished without a trail. Slivers and splinters of the chronicle have now been dug out and deposited behind glass shelves in newly built museums.

I fidget with my phone for directions. In the waiting room of the station, a group of chirpy twenty- somethings with bursting backpacks and funky sipper bottles are waiting for the morning train to Goa. Their conversations swerve to Ladakh, plans for the next jaunt. It’s an ache for the new and the exotic.

If not for the Kochi-Muziris Biennale, I wouldn’t have rushed out for this journey. My first encounter with this ancient city was four years ago, 40 km away, in the form of rubble at Aspinwall House. Artist Vivan Sundaram had loaned 80 kg of pottery shards from Kerala Council for Historical Research (KCHR) to fashion a 40-foot long installation titled Black Gold. Laid out as an archipelago symbolising pepper and all that it stood for, the terracotta mound seemed like an angry wife’s answer to a domestic quarrel.

Of a self-sustaining civilisation that thrived in the first century BCE and had gates open to Romans, Persians, Greeks and others from across the high seas, all that remains are fragments of amphora and torpedo jars that once adorned kitchen corners full of oil, wine and water.

Kodungallur is an hour-and-a-half from the station. I take a cab to connect the location dots that would help decode the mystery of Muziris. The town is in its morning yawn as our cab rolls past its barren roads. Fishmongers in chequered lungis prance through the forlorn streets dominated otherwise by the pious. The pilgrim city, home to Kerala’s oldest market built by the Portuguese, is speckled with old monuments, including two exquisite synagogues. Archaeologists began here. So do I.

The sun arrives before me at the Kottapuram fort and bathes all things old and new in its buttery halo. I walk up its slope to the relics that date back to 1523 when the Portuguese built the structure to watch out for ships arriving from their homeland. These are housed underneath a makeshift roof. The rest of the fort walk is lined with park benches that lie unoccupied, mocking the idea of translating history into tourism. With an enquiring glance, the watchman slides down from a mound beside me. His is a dream job; earning a living by watching over the ruins of his childhood memories. The tree he clambered upon after school to count the ships clawing from the Periyar river into the sea has been uprooted to expose the foundation of a citadel wall. The wilderness, he says, has been replaced by bricks and bones from other lifetimes.

“This one was around 25 years old,” he says. I watch him untie a rope with a magician’s effortless precision. We are on either side of a six-foot rectangular box that has been wrapped in tarp and secured by straps. Inside the box, the skeletal remains of a Portuguese man dug out from his burial spot five centuries in the past. His right hand amputated and bones stained orange from years of being covered by surkhi brick dust, this was one of the many men who were tortured to their graves when the Dutch conquered this fort in 1663.

Burdened with an air of tyranny, it is a difficult stroll. Beneath my feet are undug Portuguese men and the story of rivalry over foreign soil and a familiar sea. Chips of cannon balls were used to blow up this fort lie sealed in plastic zip pouches, labelled with date of find and conserved in the Kottapuram activity centre. In similar pouches encased in cabinets are hopscotch stones, beads and smoke pipes—all that men used to pass time as they eyed the ships being stacked with pepper, cardamom and malabathron. Centuries before the Portuguese and the Dutch built these coastal structures, the monsoon winds had brought the Romans to Kottapuram.

At the foot of the fort near the boat jetty, I imagine Roman vessels anchored here while sailors go around exchanging topaz, coral, copper and wine for pepper, silk, spices and tortoise shells; and picture the townsmen sign away their riches, fascinated by the visitors’ appearance and lifestyle. The Vienna Papyrus, a second century trade document that records a loan agreement between a creditor who hailed from Alexandria and a man who lived in Muziris, is about a deal estimated at over €150 million in today’s money. This was just one-tenth of what a single ship could carry.

Every year, this neglected town of Pattanam would unveil artefacts from the past: ancient beads, Roman coins, bricks and steps leading to another century

Somewhere between 40 and 50 CE, an ardent traveller set off from Greece logging his navigations in and around the Red Sea in the ‘Periplus of Erthyean Sea’. His narrative is vague and mentions a dozen modern day locations that match each description. All this anonymous chronicler has about the lost port of Muziris is a pungent hint of pepper and spices and a river that led to the Arabian Sea, a route for spices to be taken from ‘Muchiritown’ to the West.

From where I am standing, I can see the sea draw the river into itself. Archaeologists have for decades poked around the Periyar for a hint of a settlement that is believed to have been submerged by the great floods of 1341. For years, Kottapuram fort was a staging ground for the search for Muziris. What escaped them perhaps was that the river too convulses, changing course. Hence Pattanam, 7 km away from the river bank, was an unexpected revelation.

FOR MOST OF us, Muziris is the prefix of India’s largest art biennale. It was while researching a piece on the biennale that I heard of an engineer who’d unearthed a primitive brick wall in his backyard while planting saplings. Every year, come monsoon, this neglected town of Pattanam would unveil artefacts from the past: ancient beads, Roman coins, bricks and steps leading to another century. An enthusiast who dug deep in his patio unearthed a sack of gold coins, ‘nidhi’ as they say.

Teju Cole’s assertion that every city is a palimpsest takes me to the other side of Pattanam. The cab traces a route parallel to the river. On its banks once dwelt a thriving society with a settlement dissimilar to local ones. This river was linked via a labyrinth of inland canals. It’s a river that changed course and wiped out a culture, but continues to swell and ebb with every passing boat outside the budget home where I halt for the night. I can watch the river in the distance from the window when I look up from Italo Calvino’s Invisible Cities where Marco Polo is describing the hidden city of Theodora to Kublai Khan.

In the morning, Sugandha, a retired tourism officer and my guide for Pattanam, reaches half an hour before the slated time. Having a guide means getting information loaded with opinion, and mine is a vegetarian who blames Kochi’s mosquito crisis on non- vegetarians who slaughter frogs just to devour their limbs and argues about the first church in Kochi where St Thomas arrived in 52 CE. The ride to Pattanam is packed with anecdotes and laced with her judgements. The cab makes its way through unkempt territory, land abandoned to the wilderness by owners who left for the cities. Sugandha’s far-fetched explanation is that the town hasn’t recovered from the deluge of 1341.

The two hectares of excavation land in Pattanam, much like Calvino’s Theodora, resembles a ghost town. A few metres from where I wait for the caretaker to cycle back with keys to the museum that is yet to be opened to the public, I see a trial pit from which a potter’s junkyard has been dug up, I am told. A few yards away is another trench that leads to a kitchen with stacks of pots and pans which look as if they’d been washed and set aside for use the next day. Historians, guides and writers have been trying to connect the dots, but these relics speak in a language only the soil understands.

The museum is a storehouse of cameos, Roman beads, turquoise glazed pottery, amphora jars, ancient coins and details of a wharf that was unearthed eight years ago. An assortment of botanical shrubbery, including cardamom, rice, pepper, lentil, areca nut, and resins was inexplicably preserved in the water-logged area of this wharf. I walk the length of the hall, scanning the monochrome glass objects that are identified as pieces from Roman gaming counters. Sugandha with her habitual quizzical expression lectures the junior Bengali archaeologist about Malabathron, an aromatic plant that was a prime export item back in those days. A display board documents the 2007 Pattanam excavation that exposed a canoe which was carbon dated back to the first century BCE.

Apart from what has been recovered and recorded, the walls also display works of art inspired by Muziris. G Ajit Kumar’s artwork of the port city, reminiscent of Pieter Bruegel Elder’s paintings, captures men who go about their chores while their boats stay anchored to the brick wharf. There is also Riyas Komu’s sculpture in wood of a Roman goddess.

A tea stall at Kodungallur offers a break to mull over all of it. The shop, which was called Ganapati until a year ago, now has a new name: Muziris tea stall. Calvino writes ‘Arriving at each new city, the traveler finds again a past of his that he did not know he had.’

Here in Kodungallur, local inhabitants are learning of a past they weren’t aware of. The entire route throughout Kodungallur is sprinkled with hotels, clubs and ventures with Muziris in its name. Here history is tourism, tourism is responsibility, and responsibility a business. It is all interchangeable. An entire town waits with tea brewing on stoves, clean white sheets and freshly tarred roads for visitors to come learn of a lost city beneath their feet.

(Akshaya Pillai is a freelance journalist based in Thiruvananthapuram)