In Pursuit of the Perfect Blouse

Indian women wait for many years to find The One. The One who fully understands a blouse 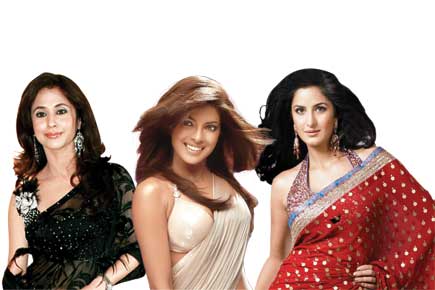 Indian women wait for many years to find The One. The One who fully understands a blouse


Venkateshan came highly recommended; he sounded sensible on the phone, and even mentioned the word ‘trial’; and he was within easy reach of both my home and office. All very important considerations when you’re about to test a blouse maker.

An Indian woman’s affair with the six-yard begins sometime in her pre-teens, when, inspired by a relative or a movie star, she tries to inveigle some fabric—a shawl, tablecloth, even towel—around her body. At that time, the ideal length of the pallu, the correct number and width of the pleats or the fit of a blouse are distant existential issues. She’s just happy the thing stays on.

The sheen begins to wear off as she grows up and fights for her right to wear a racerback tee and skinny jeans; when she realises that saris can make you look shorter and sometimes bigger; that you can’t run into a train or jump over a puddle in one; and that boys prefer skirts. And even if one remains dedicated to the drape despite afore-mentioned obstacles, there is still one thing that can make any sari-wearer falter: the blouse.

Of all the parts that make up the sari dress (let’s just call it that), the blouse is the most difficult to create. The fact that, because of its visibility, it must be an almost perfect sample of tailoring makes it a dangerous and temperamental aspect of the ensemble. At its most basic, a blouse is a simple sum of five or six cuts of cloth; it is neither large nor complicated enough to justify much agony. But then the simplest things are usually the hardest to master.

“A good blouse should be like second skin,” says Jyotsna Kamat, a Bangalore-based social historian who has authored 10 books on Indian traditions. “If you have to adjust your movements according to the cut, it’s not doing its job.” It takes a magician to create a piece of clothing that is at once fitted well enough to make her feel natural, flattering enough to accentuate her curves, yet so comfortable that she could do the windmill dance in it. Unfortunately, there aren’t many such magicians around.

Hence, a blouse usually comes with one or a compound of problems. Sometimes, it’s too tight or loose; even a tailor who created the best sample can make this mistake (like Vasantbhai). “Tailors are whimsical. Without reason, they suddenly decide to do things their own way,” says Usha Mehta, a 78-year-old sari wearer. Then, there are specific issues: for writer Ranjona Banerji, who likes sleeveless blouses, arm holes are a constant irritation. “It has to be cut just right. Unfortunately, it usually isn’t,” she says.

Some tailors add so many darts to the cups of a blouse that they resemble a pair of pitched tents even when there are no breasts inside (think Madonna’s metal bra). Others (like Ashrafbhai) flatten the chest in such a way that a 30-year-old looks like she’s got a 14-year-old’s tween buds. Then, there’s the wrath of the prude: “I can’t cut the back so low. Think about your respectable parents,” a blouse tailor in Thiruvananthapuram once told me. And there are a myriad other fit and form details that can sully a blouse.

Filmmaker and architect Jayoo Patwardhan found a solution few women can emulate: making her own blouses. Patwardhan, 59, taught herself by taking apart a blouse and imitating the construction; now she can make up to eight blouses a day on her trusted foot-pedal sewing machine. Patwardhan’s Maharashtrian nine-piece cholis follow a traditional blueprint: like a patchwork quilt, she combines several complementary panels of fabric so that the blouse has a different pattern and identity from every angle. The result is a fantastic piece of art. An art director and costume designer who designed the sets of films like Utsav, Patwardhan says she’s lucky she has a little tailor in her. “The only time I ever used a tailor was for my daughter’s wedding, and I regretted it. And it helps that I know my own body.”

In theory, so should a tailor. In fact, he ought to know a customer’s proportions better than her husband or boyfriend. After all, does any man know the difference between his wife’s chest and bust point, or the cup sizes of her breasts, or the exact contours of her arms (it can be divined from three measurements between shoulder and sleeve-end)? From shoulder to midriff, there are 10 or so measurements required, with everything from depth of the neck to the size of the back at the top, middle and bottom taken into account.

Unfortunately, finding a tailor who will do such painstaking research and recreate it in form is like prospecting for gold: you have to go through lots of dirt before luck strikes. But once you do, the relationship is unique. He will know when you switch from an under-wired bra to a cotton Pussycat Super Lady; make innumerable alterations; produce a brilliant blouse within 24 hours on ‘urgent basis’; and make house calls. I remember one brave soul who sneaked past the grouchy guards of a Kerala girls’ hostel to make a late-night home delivery to a favoured customer (me). It happened on the eve of Valentine’s Day 1996 at the YWCA in Thiruvananthapuram.

There are constant rumours and anecdotes of experts; the trick is to jump in and ask for directions or, these days, a mobile number. (There is even a Facebook group called Blouse Tailors and Designers All Over India: “For those whose tailors always ruin their clothes, and are in search of some good tailors… especially blouse tailors!”) Some Parsis in Mumbai swear by Umeshbhai in South Mumbai’s Walkeshwar; others talk of a Gara blouse expert in Kemps Corner; scriptwriter/costume designer Shama Zaidi finally found a man who sits outside her gate in Juhu, Mumbai.

And I met Venkateshan. His recco came from one of the best in Mumbai: The Indian Textiles Company Limited at Mumbai’s Taj Mahal hotel. The 38-year-old operates out of a 50 sq ft rented sidewalk space in South Mumbai’s Colaba area. His shop, called R Fernandes, has four karigars and four sewing machines. “I have spent 20 years in tailoring,” says the Tamilian. “I worked as a karigar and then as a master before having my own place.”

Like most new-fangled tailors, Venkateshan’s first request is for ‘a sample’. “If you don’t have one, then I will have to give a trial and it will take longer,” he says. I handed over my only sample-worthy blouse, but he still didn’t finish by deadline. Looking at my somewhat irked face, he says: “Just give me a few hours and I’ll do it.” I do, and this time he delivers.

It was an exact copy of a somewhat flawed original. The arm holes felt tighter than the sample, and the cups were only a slight improvement on Ashrafbhai’s version (though the sample was not his creation), but the body of the blouse fit well, the seams were well-stitched and there was no ugly piping. Since there was no trial room, I conveyed a verbal critique. “I can lift the cups slightly with a panel underneath the breasts,” he offered. I rated Venkateshan 6 out of 10 (Dream Girls tailors in Dubai scored an 8, the highest); most of his predecessors only made it to 3 or 4. So being realistic, I decided to keep Venkateshan, but also find another. I’m taking the advice of veterans: Usha Mehta says you always need two; one for special things, one for the everyday. Venkateshan shall be my everyday man.

By historical standards, Indian women began to wear the blouse very recently. They used to leave  their chests bare, or threw a simple piece of cloth over it. The earliest blouses only covered the breasts and left the back open.

Many communities in South India still consider a blouse an affront. Last year, newspapers carried a story of the Thottinaicker community in Salem, Tamil Nadu, which excommunicates any woman who dares to wear a blouse with her sari. Women simply cover their chests with their sari pallu. “If we wear blouses, boils would erupt all over our body,” one 25-year-old woman is reported to have said.

The Mughal Empire was to stitched garments what Yves Saint Laurent was to pants in the 60s. YSL put pants on women; the Mughals showed that a well-tailored garment was better than just the fabric itself. Their customs spawned brilliant mythical tailors who, it was said, could size up a woman’s measurements at a glance, since they weren’t allowed to touch or look closely. I’d heard the tales, but finding a traditional Indian tailor from the expert lands of Uttar Pradesh or Madhya Pradesh seemed impossible till a suggestion led me to 65-year-old Ghulambhai, a former Bollywood costume designer.

“The first blouse I will make is just for trial, the second for you, the third will be for me because by then I will know what suits you,” he said, before agreeing (yes, he has to agree) to take me on. Working from a run-down basement shop in a commercial building in South Mumbai, Ghulambhai is a certified dance costume expert who picked up tips from Oscar-winner Bhanu Athaiya. He has dressed and bloused every actress of a generation, from Vyjayanthimala to Sharmila Tagore and several TV ladies.

I ticked off everything that told me I’d found the right man: he made paper cut-outs of each client’s blouse measurements; called me beta; spoke extensively of ‘dart theory’, of how the shape of a woman’s face, her neck and her breast should determine the cut; that he preferred working with his family and keeping it small; that he couldn’t measure me while I was wearing a T-shirt; that I should come back in the right bra so he could get the measurements right; he was from Varanasi. I could just feel it. He was ‘the one’.