Sitting with over a hundred people clustered around red felt-top tables, this enthusiast played a game that was neither the fabled Diwali matka of teen patti, nor Contract Bridge, but one that required as much skill as luck, or perhaps more. 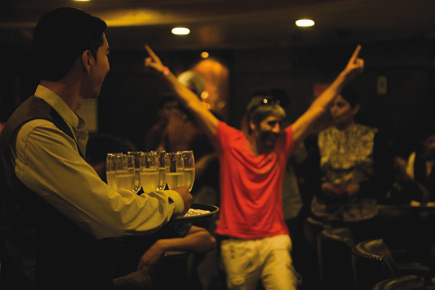 Sitting with over a hundred people clustered around red felt-top tables, this enthusiast played a game that was neither the fabled Diwali matka of teen patti, nor Contract Bridge.


For once, with utter disregard for the slick furniture and upholstery, I was sprawled out on a sofa in the lobby of Casino Royale. For a moment, only a moment, the thought crossed my mind: I could make poker a career. I was exhausted after ten straight hours of playing the game, but more than a little satisfied with the Rs 1 lakh that I was taking home after four days of play.

Just below the welcoming deck of the lobby was the poker room, the constant clatter of plastic chips filling the air.

A few hours earlier, I had sat here with over a hundred people clustered around red felt-top tables and playing a game that was neither the fabled Diwali matka of teen patti, nor Contract Bridge, but one that required as much skill as luck, or perhaps more.

Each time a player threw his chips on the table by way of a bet, I recalled the Angry Young Man dialogue from Yash Chopra’s Deewar: “Main aaj bhi phenke huay paise nahin uthhata (I still do not pick up money thrown at me).” But this was hardly the case here. The winner would actually embrace the table in one fell swoop, reaching out to gather all his winning chips, a chunk of which had been bet by other players at the table. All this while, the food and drinks were on the house, and if it had been Las Vegas, a complimentary back massage from the casino masseur would have been thrown in too.

But this was Goa, the only place in India where it’s legal to play Texas Hold’em. The night had really gone well for me in a game I had taken to five years ago while working as a news producer in Vegas. Back in India, participating in my first tournament, the IPC in April 2011, I bought myself a seat for Rs 10,000, like the 108 other contestants. All began with equal chips, but the winner took home Rs 295,000. I finished a respectable tenth, pocketing a cool Rs 20,000, doubling my ‘buy-in’ money.

On my latest visit (for this article), I did not make it to the final table in the IPC tournament, but before bowing out, I had the satisfaction of knocking out a celebrity, Bollywood filmstar Harman Baweja, who made his displeasure amply clear. The Hrithik lookalike is an acclaimed poker lover who has often featured among earlier IPC prize winners. Well, the game didn’t follow the sort of scripts his films do; in his superflop Victory, he plays a batsman who single-handedly defeats Australia, South Africa, England and Pakistan.

The actor bet heavily with a King of clubs, King of diamonds, Jack of clubs, on the table and when an 8 of diamonds came next on the turn, with the grand words “all in”, slid all his chips onto the table. His bet was a fair indication that one of the cards he held was a king, and three-of-a-kind is a very strong combination at this stage of play. But he seemed clueless that I had an Ace of diamonds and Jack of diamonds, giving me ‘two pairs’ plus the possibility of getting a ‘flush’ (all five cards of the same suit: diamonds), raising my odds of success.

It took an effort of will and nearly all the chips I had to match his bet. As luck would have it, a beautiful Queen of diamonds turned over as the last ‘river’ card on the table, giving me the ‘Ace-high diamonds  flush’ that I had been hoping for. It knocked the filmstar out of the tournament. In poker’s card combination hierarchy, a flush beats three-of-a-kind. Words flew. People gathered around the table. He and his friends raged, questioning my judgment. I remained silent, but the fact was that he had been beaten fair and square. When my turn came to be knocked out, ending up thirteenth, I headed to the cash tables. I was already up Rs 40,000 playing at cash tables over the previous two nights, but decided to stake only Rs 10,000 of what I had made.

Playing through the night, my winnings rose and fell, but at 7 am, I was up Rs 1.5 lakh. That is when I succumbed to the folly of accepting a drink on-the-house. A couple of pegs of Black Dog, I learnt to my dismay, is all it takes to ruin a great run of poker. My confidence soaring, I took an unwarranted risk—which slid me quickly back to Rs 1 lakh. Thankfully, I could still see clearly enough through the whisky to note it was time to leave.

Sprawled on the sofa in the lobby, it seemed to me my knowledge of the game had improved considerably since the day I discovered Texas Hold’em in 2006, while helping myself to an Indian buffet lunch at the famous Riviera casino on the main strip of Vegas. The game dragged me in, and I was soon watching it not just in casinos but even on ESPN. I wanted to master it. Through Mike Caro’s Poker Tells videos on YouTube, I learnt the distinct mannerisms that give away a player’s cards, or indicate whether he’s bluffing or betting on the best cards possible. I watched the game’s legends such as Doyle Brunson, Daniel ‘kid poker’ Negreanu, Chris Moneymaker, Phil Ivey, Gus Hansen and Jennifer Harman, among others, play on TV. It piqued me, though, that there was not a single Indian player in the top 100 of world poker.

Over the years, I would play friendly cash games with beer buddies across America, without going broke.vOnce every three months, I would sit at the low-stakes $1–2 limit games at the Trump Taj casino in Atlantic City, and play the night away with $60. I met many young Indians there, mostly software engineers from New Jersey.

As a novice, more often than not, I’d lose all my money. One day, on my way back home from work, I rented The Sting and Rounders on DVD, the two best poker movies ever. In the first, a virtuoso Paul Newman outcheats a crime boss. The second, and classier, starred Teddy KGB (John Malkovich), a Russian loan shark in America who is defeated at a poker table by a reformed gambler (Matt Damon) to help his friend (Edward Norton) pay off loans. I also read umpteen books: notably Phil Gordon’s Little Blue Book and Little Green Book.

Then, in a 2006 edition of the World Series of Poker tournament in Las Vegas, the World Cup of Texas Hold’em, I watched a 37-year-old Hollywood agent named Jamie Gold bluff his final hand to win $12 million in prize money.

It wasn’t long before I too was fairly good at the game, and I would often walk home in Dunn Loring, Virginia, with wads of cash from my winnings. I wasn’t very careful with the cash though, with dollar bills emerging every now and then in my wash, wringed unusable by my washing machine. That’s when I came to terms with my forgetfulness, and pledged never to make a career out of poker. I would play it as a hobby. But there would always be temptations. Like Goa.