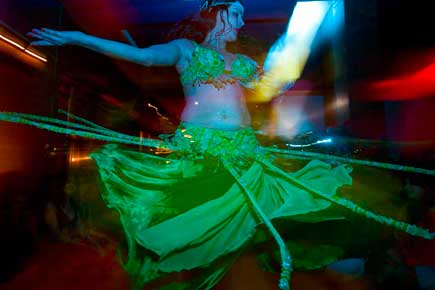 A young man liberates himself from a sweaty T-shirt and jungle boots. And sprays half a can of Axe deodorant. It works. As he gets ready to Tango, in an iron crisp shirt and shiny leather shoes, custom-made in Matheran, he knows there are two girls to every male in this room. Axe ratio. The women have traded their daily footwear for a pair of dainty high heels, suddenly going from boring to sexy. The gramophone voice of an old man singing a foreign song floods the calm air-conditioned studio. The incomprehensible lyrics inspire you, give you the goosebumps. You look around and ask a decent boy for a dance. He says, “Yes.” Standing at arms length, you create an inviolate unit with entwined arms. For any girl here, good luck is a partner in hand. Bad luck is a boy with body odour.

You take time to synchronise your rhythms. The boy, too shy to look at you, stares sideways, while you’re forced to look at his chest to predict his movement. Under no circumstances must the eyes meet. With firm hands and agile twists, you keep him at a distance. “Ouch!” You halt as your partner marches onto your toe. “Aaaah,” he moans as the pencil heel of the lady behind jabs his calf. The Argentinean daydream is shattered. It all comes back to you. You are somewhere near a place called Linking Road. In Mumbai. And this is a Tango class.

Tim and Malou, an American-Swiss couple, taught dancing in the US and Switzerland before settling down in Mumbai. What they find uniquely Indian when they teach Tango and Lindy Hop here is the unparalleled enthusiasm on display. “Indians have a natural sense of music and movement,” Tim says.

In urban India, dance classes that teach Tango, Salsa, Hip-Hop, belly dancing, contemporary, Bollywood, ballroom and fitness-oriented dancing are becoming a rage. At Rs 200 to Rs 3,000 for varying durations, these exotic sessions mean different things to different people. For lonely hearts, they are an opportunity to flirt, indeed find love. Some even find themselves. Vineet Bangera, a dance instructor, remembers his oldest student, a 72-yr-old man. “He had a rod in one leg and two replaced knees. His wife was bed-ridden and had a wish. He should learn dancing. So he came to us to learn the jive.”

Umashankar and Gaiti Nair are among those who found love through dancing. They met a decade ago, practising for a musical in Delhi. Gaiti fell for his style. As for Umashankar, “Gaiti has the grace of a woman and the strength of a man.” They can’t imagine a life without dance. They decided to make it their career and now work together as professional choreographers.

“The magnetic pull of dancing brings couples together, but the very proximity could destroy the relationship as well,” says Uma. “The body language of a couple dancing says a lot about their relationship. At times, the girl leads. A partner uses the other only as a prop. If either is pre-occupied or aggressive, the dance looks ugly.”

The body language of a couple can determine its future too. “Two people may be perfect for each other, but with years, the shine wears off,” says Padma Gangwani, who met her husband 25 years ago. For her 40th birthday, Padma surprised her husband with a massive tattoo on her lower back. “He loves it, and appreciates what I went through for him especially since I can’t even see it.” Now, Padma plans to surprise him with a lap dance she’s learning with her pole dancing, Samba and striptease routines.

Shilpa Rane, a fitness instructor, has introduced over 180 students to erotic dancing over the past two years. “Burlesque is just a tool. My classes are essentially fitness workouts, with innovation and props to make them interesting.” For instance, there’s no pole in her pole dancing lessons. There is a curtain rod, though. Students must learn to balance the unattached rod and their body weight. There is great danger of looking like tandoori chicken on a skewer if the attitude and fitness are not right. And you could look a lot worse during a striptease routine. How many women can manage to look sensuous when they have to pull up their tops, lie on the floor, kick and fling the pyjamas off? It’s like trying to look sultry while doing diabolic crunches.

Almost all the women in Shilpa’s classes constantly complain about their bodies. They get depressed if they put on two kilos, says Shilpa, needlessly so . “Work out, diet, lose it. The truth is they won’t be happy even if they lose weight.” Shilpa puts a lot of thought into her classes. Along with physical postures, she urges students to retain a mental posture too. “‘I’m hot. I’m sexy. And confident in my body’ should be the attitude. You don’t need a guy to discover yourself. A man on the chair is incidental. Feeling confident in your own skin helps you be what you want to be.”

Vineet Bangera, a 22-year-old instructor at Salsa India, teaches the Cuban form of Salsa, which pulls people closer. “It doesn’t get you more women, but definitely improves your chances. You may be good looking, but if you can’t hold a girl in your arms, you’re losing out.” Though Salsa is supposed to be a dance where men showcase the lady’s beauty, you feel the opposite on Salsa night at Zenzi, a posh Bandra lounge. The otherwise dull Indian male steals the show, like a colourful peacock courting the boring peahen.

In a dance class, it is common for students to be infatuated with their instructors. When a fit instructor in lycra pants shows his female students how to do a Bollywood ‘jhatka’, the ladies can’t help but swoon over his tight derriere. “Dancing isn’t monogamous,” says Uma, “if it were, it would be boring.” Women know dancing with unfamiliar men is usually an adventure. An enthusiast who danced with three different men one Salsa night says the last thing she felt was boredom. Her first partner was a 40-year-old man. “I couldn’t follow his lead well as his paunch came in the way. The second one suddenly switched to the Bachata, an intimate dance, and pushed his legs between mine,” she says. No 3 was the weirdest. “He was mixing Salsa with Hip-Hop, which was strange. But I was getting his rhythm,” she says.

“An unspoken rule among women is ‘don’t dance with one person for too long’. I ignored that. Then, he started pulling me closer and I felt something disgusting. I was soon back in the corner.” While the experience did not turn her away from dancing, it did teach her how to read intentions.

Keeping the discomfort and sexual politics in mind, belly dancing classes in Mumbai are female-only zones. Mention a belly dancer and images of a curvaceous woman in revealing clothes grooving like Helen get most men distracted. It is, after all, a dance perfected for male consumption. Perceptions like this have banished men from Veronica Simas De Souza’s belly dancing classes. The lights are dim, doors locked and windows covered. Students are encouraged to lose their inhibitions and “feel beautiful”.

Veronica, who is of Brazilian origin, has taught in India for the past three years. “You’re in India!” she jokes as she begins her class with what she calls a belly-dancing namaste, a step that fuses belly dancing with Kathak. She also makes students perform Kapalbhati to inflate and deflate the stomach. Grandmothers, young mums, working women, college kids, even school girls as young as 13 pull up their tops and kurtas to see if their tummy roll is correct.

Feroza Pandey and Meena Desai are senior pathologists at Prince Ali Khan Hospital, Mumbai. They have been friends for over 25 years. A few months ago, they joined a group of doctors, journalists and a banker, all ladies in their 50s, for a Latin American dance class. “The last time I joined a dance class was in 1972,” the mother of two sons says, chuckling. Over 16 Sundays, they learnt the Cha Cha Cha, Rumba and Rock ‘n’ Roll, among others. They got so deep into it, they would practise daily for half an hour.

It’s a nice change. The job of a pathologist is always backstage, away from the glow of attention. And they have been backstage for years. But dancing puts them on centrestage. “It’s a way of reassuring ourselves. We can emote, move, feel love,” Feroza says. Her wish: special dance lesson discounts for senior citizens.