Good for the Sole

The abject surrender of medical intelligence in the age of gadgetry 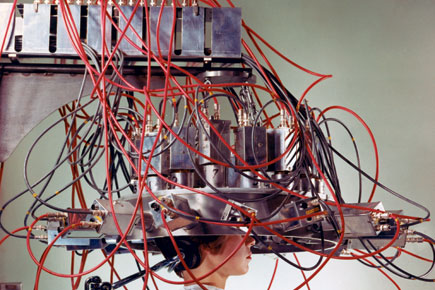 The abject surrender of medical intelligence in the age of gadgetry


“I’ve done everything possible, I don’t know what’s left, but I’m sure you have something new to suggest.”

I watched my new patient’s mother unload two large plastic carry bags onto my desk. The mountain of files and folders kept growing till it completely cut off my patient from view. He was a resigned looking five-year-old. Clearly, he had been through this many times before.

“Are these all yours, Sanju?” I asked.

“What are they meant for?”

“To make me better.”

“Sanju, go sit outside,” interrupted his mother, “Doctor, please go through all the reports first. After that we can discuss Sanju’s condition.”

But not at her.

I smiled at the shocked faces of the ghosts of teachers of medicine, from Hippocrates and Sushruta, through Osler and Hamilton Bailey, to the wise men and women who had taught me the approved dynamic between doctor and patient in consultation. By their canon, the first few minutes are spent in getting acquainted. As undergraduates, very quickly, we learned this had nothing to do with politeness. It merely helped in making a quick diagnosis.

Putting the patient at ease makes it easier to examine him. After a good history and a complete physical, if we still couldn’t tell what was wrong, we seriously needed to whet all five senses before we could lay claim to a sixth.

I swept aside Sanju’s files and folders, and invited him over to my side of the table.

He was happy monkeying in the swivel chair while I chatted with his mother. She interrupted herself to say what a mistake it had been to bring Sanju along for the consultation. Usually, she just carried the reports.

Sanju peeled off his clothes without a murmur and declaimed nursery rhymes in the altogether with brio as I examined him under his mother’s puzzled eye.

I knew what was coming next.

“Was it necessary to do that to Sanju, doctor?” she said, incomprehension writ large on her face. “Nobody’s ever done that before.”

I’d already guessed that. The thicker a patient’s file, the more unlikely it is that he’s ever been examined.

To me the disturbing element in this scene was not that thick file of blood work and scanned images. What disturbed me was the way that file had usurped the persona of Sanju. The little boy (at least the only part of him that mattered) was no longer inside his flesh-and-blood shell. He was contained in this series of virtual images of various body organs. He was the biochemical values of his blood. The child had become his sickness. He had no identity without it. And that sickness was now contained, miraculously, in those two plastic carry bags. Great, if only it worked that way.

“How is Sanju doing now?” I asked his mother.

“That’s just what worries me. The reports are so much better, but he’s still complaining. Do you think he needs counselling?”

If I agreed, the cure would be complete. The real child would be well and safe in the folders. The little imp in my room was just the illusion, waiting to be psyched out of his skin.

“Where is Sanju?” I asked, expecting the usual

five-year responses, an amused whoop, or an ambush with a bloodcurdling yell, or even the less usual and quiet, “I’m here.”

Instead, Sanju stood up on the examination table and pointed to the mirror.

“There! Sanju’s there!” he trilled.

Ten minutes later, when Sanju’s problem was diagnosed, his mother was deeply sceptical.

“Why didn’t it show up in all those tests?” she demanded. “They can’t possibly be wrong. Really state-of-the-art, all those big shiny machines.”

I saw her point, entirely. I’m neither big nor shiny nor state-of-the–art. Faced with the postmodern chic of sleek steel, womby Perspex and plush leatherette skin, we modern doctors are about as hep as pre-Spielberg dinosaurs.

So far, doctor and patient are both on the same side of the fence. Like Sanju’s mother, I too need an efficient and accurate report, numbers, images. Facts.

To me, these facts are only information. I need my own brain to process and interpret this data, then match it against the specifics I’ve gleaned from examining Sanju.

To Sanju’s mom this last step is redundant. She sees the doctor as an irritating chaperone in her mad romance with technology.

If you think that’s an exaggeration, consider this.

The slum where Chhaya lives has no water supply, no sanitation, no ration shop. But it has three ultrasound clinics. When Chhaya had been married three months, her mother-in-law took her for her first ultrasound. Chhaya recalled it with a sense of occasion, and I realised the ultrasound was some kind of rite of passage.

“What was the ultrasound for?” I asked.

“Special treatment, so that I can have a baby.”

Chhaya was a polite girl, it embarrassed her to have to explain the basics to a doctor. Three sonograms and no pregnancy later, her mother-in-law pointed out that she had spent enough on this bride, it was time her son found another.

Chhaya then put together savings and borrowings and went in for a fourth ultrasound.

When I asked her how a sonogram could possibly help her get pregnant, she was openly contemptuous of my ignorance.

Hadn’t I heard of IVF?

To my surprise, she was quite well-informed about the different procedures. It seemed strange that she should have gleaned all this from the sonologist.

I discovered that all three clinics were outreach for a gynaecologist with a thriving infertility (or fertility) practice. There were no referrals. Patients walked in because they wanted to. Mothers-in-law, and sometimes mothers, brought in bahus at the first suspicion of any hint of laziness in the sole duty of womanhood: the production of a male child.

These women were illiterate, by no stretch of imagination were they computer savvy—yet they had commandeered a sophisticated technology and absorbed it, near ritualistically, into their traditional compulsions.

After all this, I was still unclear how a sonogram, the imaging itself, helped.

Chhaya laughed in scorn. Without it how could you tell if the time was right for IVF?

To Chhaya, and the slavering patriarchy that controlled her, the machine was the oracle.

It was an ugly hoax, and I wondered whose inception it was. But it had been swallowed whole, and I knew nothing was going to make it go away. The clinics

might shut down, but the belief would stay. Chhaya and her sisters would simply find another such oracle two streets away.

Why did they need this oracle? They could have gone to the infertility clinic on the recommendation of their doctor—there were about six doctors within a mile’s radius.

“This is family business,” Chhaya corrected me, “we don’t like discussing such things with the doctor.”

Lest you think Chhaya’s story belongs in a slum, a woman who drives a Mercedes-Benz recently told me her entire family was really into Reiki now after all that.

“All what?” I asked obligingly.

They had been going through sheer hell for months, she said in answer, enumerating their tragedies. A slew of common ailments, really, but she made them sound like the ten plagues of Egypt.

“We went through everything! We were scanned from top to toe—and nothing! This is the end, I told my husband. From now on it’s Reiki or nothing.”

“What did your doctor suggest?”

“Doctor?” She reacted as if I’d mentioned a dented Maruti 800. She wouldn’t be seen dead next to the thing.

How did we get here?

Like most people, I too love technology. It takes the ache out of most chores. It frees me to do what I want, which is to think. But it cannot think for me. Neither can it look, hear, smell or touch for me.

Why am I lolling atop the food chain? I’m supposed to be sapient. But somewhere along our love affair with technology, we seem to have decided otherwise. We’re dangerously close to equating intelligence with a matter of knowing which buttons to press. And the more wired we are, the easier it is to abnegate intelligence for the thrills of gadgetry.

Medical technology, in particular, made the leap from diagnostic tool and therapeutic aid to caprice even before we could notice. Illness got quickly promoted to vanity. Predictably, the poor desired what the rich flaunted. The doctor—spoilsport and whistle-blower—was left with two choices:

a) stick to good science and risk opprobrium, or

b) investigate the patient to the last square inch, and if still without an answer, refer.

The first gets you ignored or disliked, but it gets the patient cured. The second makes you a great social success, and the patient acquires a nice thick file.

Of course, a great deal of technology is used defensively by doctors terrified of litigation. Once you start giving in to that terror, things spin out of control. You’re afraid to diagnose appendicitis without the blessing of a sonologist. You overlook the first dictum. Do no harm. Pressing down a vibrating probe on the tender and inflamed abdomen of a child already in anguish, is, in my book, doing very great harm.

The commonest argument for the needless use of technology is ‘The patient expects it.’ That’s a directive I find offensive. Those who don’t will find nothing ludicrous in this anecdote.

The exquisite across my desk had stepped out of a chauffeured BMW Gran Turismo. All his antecedent life seemed to have elapsed in a spa. Everything about him looked oiled, steamed, plucked, massaged and patted into place. His face was devoid of humour or interest. He nodded, slid an oversized celadon folder towards me, and awaited comment.

It was the CT scan of a foot. I examined it curiously, every bone and ligament, every little joint space was textbook normal.

“What is troubling you?” I asked.

In answer, he slipped off a gleaming hickory slide with Ferragamo engraved on its silver buckle, parked his left foot on my examining table, and wiggled his toes at me. He was at a complete loss for words. He peeled off a monogrammed sock with the kind of funereal hush that made me expect something exotic and lethal, a tumour so rare it was practically extraterrestrial.

All he had was an ingrowing toenail. An ugly yellow bulge of pus beneath the loose shield of a fungal nail.

A sterile wad of gauze and a swift twist was all it took to prise off the offending dead nail. Cleaned up, the nailbed looked a little defenceless, but it would perk up in time for his next pedicure.

“Should I get one more scan now, doctor?” he asked, as I showed him the door. “Just to be on the safe side?”

“Will it make you feel better?”

He shrugged. “May not help my foot,” he said, “but it sure is good for the soul.”