From bullock rides to folk dances, a village experience that farmers in Maharashtra are offering can be an enduring memory 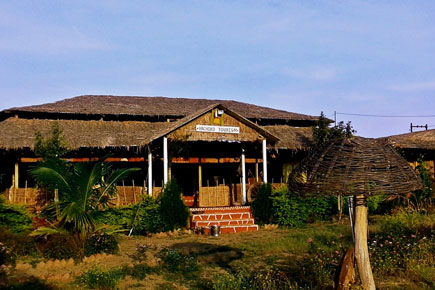 For some reason, sugarcane juice tastes much better 600 km away from Mumbai. Perhaps because it is made of freshly cut cane standing in a field in Mandwa in Osmanabad district, crushed along with some ginger and a few drops of lemon. We ask for a second round and the farmer warns us that city stomachs would not be able to digest it. Half a glass more, and his words ring true, as the juice begins to feel heavy. And there is another round of advice, asking us to avoid oily or spiced foods, and this time we listen and stop after a third piece of pakora sitting on a chattai. The sugarcane juice had been offered as a sundowner because it tends to make one sleepy if taken earlier in the day, particularly if it’s hot and muggy. In the cities, the only reason I’d drink it is as a thirst quencher. Perspectives on food can change between rural and urban.

All around the privately owned sugarcane farm, people are working, weeding, cutting the standing crop, cleaning up or carrying the sugarcane to the crushing facility (gural) on the farm, where it will be turned into organic jaggery. We see it put into a crusher from where the juice flows into a huge cauldron placed atop a mammoth chulha enclosed on three sides. Dried sugarcane leaves and other residues from the farm are used to keep the fire burning. Leaves and stalk of the ladyfinger plant are put into the cauldron with the juice and stirred continuously with huge long-handled spoons. Ladyfinger expedites the process of breaking down the sugarcane juice.

Though it looks easy, sugarcane farmers don’t participate in the process. That is left to the families who have been doing it for centuries, the art of making fine jaggery handed down from father to son. Every family has a secret ingredient that’s never shared to turn the jaggery as tasty as possible.

Snakes are common on farms but never killed because they eat rodents. The farm that we are on has a huge python and a couple of black cobras as residents. Green chillies are always kept ready because of a local belief that when a person is bitten by a snake, chillies serve as a diagnostic tool: feed the victim chillies, and if he or she finds it pungent, the bite is non-poisonous. A farmer tells me that few people die of snakebites on the job here.

A bullock-cart ride is on offer too, but it is a bone rattling one—if you don’t hold on tight, you will fall off the cart. The farmers say bullocks deliberately make the ride harder, sensing the discomfort of city passengers. Once, with city women as passengers, the bullocks just stopped pulling the cart in the middle of a stream and refused to budge. The scared women were helped off the cart by farm-hands, and the moment they got off, the bullocks decided to move on.

Such home stays at farms, minus the frills of city life—no television, newspapers, junk food, charging points for mobile phones, running tap water, etcetera—are fast becoming popular in the villages of Maharashtra, particularly in the rain-drenched areas of the coastal Konkan belt. Some cash-rich farmers in Vidharba and Marathawada are keen on offering home-stays, but a drought that lasts nine out of 12 months in a year there keeps them off the tourist radar.

More than Indians, a host of foreigners are going in for a short experience of village life. Manoj Hadwale’s farm retreat at Rajuri village in Junnar is one of those which see a number of foreigners. Since industrialisation is not encouraged in Junnar, a taluka in Pune district, because it falls under the forest belt and the Giant Metrewave Radio Telescope is located here, rural tourism has become a popular revenue source for locals with resources. Junnar is also home to an increasing population of leopards and sightings are common in some parts.

“We have a co-operative system of home-stay in Junnar,” says Hadwale. “I have the residential facilities. Someone else has farm produce that people want to buy. Tourists can also work on the farms of others, or you can milk cows, feed cows, clean the cowsheds or draw water from the wells on some other farm. Foreigners love working on the farms and cleaning the cow sheds, which Indians are not keen to do.”

Bird sightings; playing traditional games such as gotya, vitti-dandu, lagori, langdi; buffalo rides in lakes and folk dances like fugdi are part of every home-stay. Age is no bar for downing mangoes, blue berries, guavas or tamarind from trees with stones. His retreat set up in April 2011, Hadwale, an agriculture graduate, is clear about one criterion: anyone who comes here must come with enthusiasm for a rural experience and not a luxury retreat. Though he tries his best to make the stay comfortable. “I have low-roof cottages whose walls and roofs are made of sugarcane thatch. Fabrication makes it sturdy. I also have customised local sight-seeing packages to add a thorough rural dimension to the experience,” says Hadwale. He also offers good washroom facilities—critical comfort for the city bred.

Nights are the most beautiful part of rural living—the wide expanse of the sky with its canopy of shining stars, the eerie silence punctuated by sounds of insects and the blanket of darkness that descends on you can be unsettling the first night for people who doze off to the sounds of TV and need soft night lamps in their bedrooms.

You are also surprised at your own appetite whilst there. The local cuisine needs to be sampled, but avoid mushroom, for not everyone knows how to cook it. Walk about: it’s the best way to see the place. Listen carefully when farmers advise you on footwear, comfortable clothing and the dos and don’ts of eating, or you will be miserable later. Junk your cup of tea for fresh milk straight from the udders. If you think milking a cow is easy, try it, if only for how queasy the first touch of an udder makes you. A home-stay experience during a village festival is the most interesting, and Hadwale remembers travellers who visited his retreat during the Tamasha and Lavani festivals in Junnar going back enraptured. “The whole village is lit up and the colourful canopies of Tamasha artistes dot the farms,” he says, “Many travellers stay for the entire week-long duration of the event.”