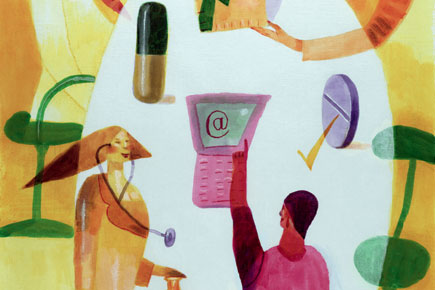 
Barbara had been diagnosed as depressive and was under treatment for the condition for several years before she discovered that she was bipolar. She signed up on a networking website and rigorously monitored her moods through charts on her profile page. It was here that she noticed how frequently her mood fluctuations went from being very good to very bad. She printed out the charts, took them to her therapist and discussed what this could mean. The result was a change in her diagnosis and a resultant change in treatment. She says, “Patientslikeme is the main reason I concluded I had been misdiagnosed depressive instead of bipolar and just recently decided to try new medication.”

Thomas, similarly, was able to see from peer charts online that the dosage of medicine he was being given for his multiple sclerosis condition was the lowest prescribed for people like him and had remained at that level for ten years. Armed with this information, he went back to his doctor who decided to increase his dosage. Soon after, his worst symptoms subsided. This is how he describes his experience: “For years, I had always taken just 10 mg of Baclofen. I was told long ago by my neuro that ‘too much Baclofen can cause weak legs’… Then I sign up here, I take a peak at what you guys are doing, and find out I don’t take enough Baclofen to deal with my symptoms. I give the neuro a call… and now I am much, much better.”

Welcome to the world of online medical networking. Patientslikeme is a medical or health networking website, a concept that is becoming more and more popular with people wanting more control over decisions about their health and medication.

According to a recent Pew Internet research survey, people with chronic conditions found peer-to-peer interactions of immense help. ‘One in four internet users living with high blood pressure, diabetes, heart conditions, lung conditions, cancer, or some other chronic ailment say they have gone online to find others with similar health concerns.’ On such sites, people can join a support community, start a wellness journal, share advice, recommend doctors, link to news stories and websites with disease information, and even send other members a virtual hug. In other words, do everything that they can on any social networking site, except with a specific purpose here.

Many of the networks themselves have been started by people with such problems who want to share and learn from others through the internet. Take the story of Patientslikeme. When Stephen Heywood was diagnosed with ALS (Amyotrophic Lateral Sclerosis, a chronic illness) at the age of 29, his brothers Ben and Jamie found that “research was too slow to help us make the everyday decisions that come with managing such a disease”. According to Ben, the concept of privacy in healthcare was the main impediment, since this meant that referring to real-life patient data was not an option. And from there emerged the idea of an online networking site that is ‘about helping patients find and learn from one another from their stories than with information’. Or, as Ben (president and co-founder) says, “opening up healthcare”.

There are, of course, networking sites meant for specific ailments or health problems (usually considered chronic) as well as general health sites (such as dailystrength.org). For instance, Grouploop (https://grouploop.org/Default.aspx) is a cancer support group exclusively for teens and includes discussion boards, instant messenger, personal blogs and videos. The stated aim is to allow teens to come to terms with cancer, share with each other what it means to be a sufferer and, if possible, see the lighter side of it. Grouploop describes itself as a safe and fun place, words usually not associated with cancer.

Grouploop works because teens with cancer struggle with not just the physical manifestation of the disease but also social isolation from their peers— the website helps them and their families come to terms with their condition. Perhaps more than any other age group, teens feel the need for support and validation from their own peers. On Grouploop, teens connect with each other for social and emotional support and gain a semblance of control over their lives; 89 per cent of those surveyed by the network said that the discussion board was their favourite part of the site.

And online networking is increasingly not just for people with chronic illnesses. A little more than a year ago, The New York Times carried the story of a man who lost weight through Twitter. ‘I knew that I could not diet alone; I needed the help of a cheering section. But rather than write a blog, keep a diary or join Weight Watchers, I decided to use Twitter. I thought it would make me more accountable, because I could record everything I ate instantly,’ wrote Brian Stelter. He adds that he initially found it difficult to be honest but, as more and more followers joined the diet in support, he felt encouraged to keep going.

What makes medical networking work is that these support groups are based on the assumption that only someone else with the same problem can understand their situation.

Radhika Nair from Mumbai, a long-time sufferer from fibromyalgia, a painful inflammatory muscular condition, says she found a lot of information and support online. “I have been a silent lurker on fibromyalgia sites—sometimes the suspicions that I have about my own health are reaffirmed when I visit them. For instance, some months ago, I went on to check if tinnitus (ringing in the ears, which sometimes is more frequent and related to my stress levels) is related to fibromyalgia in some way. Browsing through the links, I discovered that there is indeed a connection and that lack of magnesium is the root cause of both the problems. And I was able to remedy that.” However, she adds, she eventually lost interest after she found that none of these websites or networks actually suggested a cure for her condition.

However, as most people who frequent these sites testify, the relief in being able to communicate with others with the same health problem is the main reason why they arrived, and stayed, here in the first place.

Add to this increasing frustration among patients about having to solely rely on doctors, and their desire to be empowered and have more knowledge of their condition than the doctors are willing to provide. One of the stated core values of Patientslikeme is ‘creating wow’ among users. Little wonder then that users talk about emotions like ‘feeling connected with the world’ and ‘finally breaking out from the sense of isolation’.

Dr Dayal Mirchandani, a psychiatrist in Mumbai, admits that such health networking sites may be extremely educational and helpful for patients with chronic and painful ailments. “Your doctor may not have time to answer all your small questions, so here you find answers when people share their own experiences. This works especially well when there are problems which others [who don’t suffer from the same health problem] do not understand. Here you share your concerns, worries, so it gives you the feeling that you are not alone,” he says.

Dr Mirchandani adds that being on such sites is also a good idea in cases where people cannot get out or get around. “One of my patients had a bone marrow transplant which involves a long period of isolation in the hospital. It takes a long time to get back your immunity and not even your family knows how it is. She found it useful to be online with other such people,” he says.

According to an article on health networking in The Washington Post, the Health 2.0 Conference, which tracks the health industry, estimated that the number of such sites had increased to over 500 from about 35 in 2005. Public bodies like the American Cancer Society (www.cancer.org) and the Center for Disease Control and Prevention (www.CDC.gov) have been experimenting with virtual worlds such as the popular three-dimensional site Second Life (www.secondlife.com) to spread awareness about such issues as nutrition, cancer screening and infectious-disease prevention.

In India, despite being at a nascent stage, online health and medical networking is taking many forms.

The primary need still seems to be researching medicines and consulting doctors. There are some sites like the recently launched IndiaHeartbeat (www.indiaheartbeat.com), which recognise this. The founder, Vinay Agarwal, says, “We don’t claim to provide medical consultancy, information or content on IndiaHeartbeat. Instead, we are simply connecting people and directing them to their respective interest groups. What is in it for you is for you to discover and explore.”

While Doctors Republic (www.doctorsrepublic.com) allows medical practitioners to interact with each other and swap news and developments in the field (and even ask for advice sometimes), MedIndia (www.medindia.com) goes a step further and has a space for medical matrimonials.

Another new  concept is Care Givers (www.caregiverslinkonline.com). A start-up social venture with a vision to develop and build support, and in the long-term create solutions and professional services, for informal caregivers and caregiving families. Kalpana Malani from Mumbai says, “My 80-year-old mother’s Alzheimer’s disease puts her in the category of a three-year-old toddler. I joined the Alzheimer’s Disease in India Facebook group as well as ARDSI and Care Support. We also have a care circle of caregivers in a Google group where we share our worries and fears. For me the online groups have helped in dissemination of information and give me a shoulder to lean on.”

Shikha Aleya, founder of the Care Givers Network, talks about her motivations for starting this: “With any long-term ailment, what you [as a caregiver] do get is medical support and medicines—doctors, hospitals and a range of possible cures, but little support in terms of other intangible things, like how to communicate your anxiety, for instance. There is no voice for them, especially in a culture like India, despite the fact that caregivers are almost invisible patients themselves. There is a need to get together and share stories and speak out about the emotional, health and economic costs of being a caregiver.”

As for online networking, she says that such forums allow insights from strangers and, therefore, a chance for better understanding and communication. “It can sometimes help open a dialogue between the caregiver and receiver, when both connect with many others around the world who are dealing with similar circumstances and possibly similar thoughts and feelings.”

Dr Mirchandani also has a word of caution about health networking sites: “You need to be careful and understand who is behind the site. If it is PR for, say, a drug company, then the information you are getting may not just be half-baked but actually dangerous. Also what works for one person may not work for the other, so depending entirely on your peers is not a good idea.”

Medical networks are clearly here to stay. How well they are used by networkers and how long before they catch on in India remains to be seen.