For a King’s Breakfast

Fellow Goa holidayers, unite! There’s plenty to lose if this fine Goan beer is pushed over by bigger players and other bullies that are kicking sand in its face. 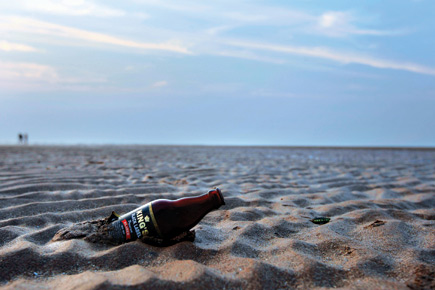 There’s plenty to lose if this fine Goan beer is pushed over by bigger players and other bullies.


Drug mules are habituated to swallowing latex balloons stuffed with heroin, cocaine or even ecstasy. The pellets are then recovered through means that will make you throw up (after crossing the international border, of course). Unfortunately, getting a mule to swallow a bottle of King’s beer and transporting it beyond Goa’s borders would be difficult, though perhaps not as difficult as getting someone to then drink it fully informed of the daring smuggle’s modus operandi.

Okay, we might be guilty of exaggeration, even gross exaggeration. But it’s not often that you find photographers more than eager to carry their ‘precious’ camera equipment in their hand because the camera bags are already stuffed zipper to zipper with King’s beer.

But, before we get any further, first things first: if you don’t know and don’t care what King’s Black Label is, we suggest you go read something else. If you do know, do care, and have suffered a bout of short-term memory loss, here goes: King’s is a pilsner (mild beer with a medium hop flavour) available only in 330 ml dark brown (often black) bottles. Its 4.8 per cent alcohol content is lower than many other beers’, and is available only in Goa.

That last bit—‘available only in Goa’—is important. No travelogue on India’s most famous beach destination is complete without a mention of it. When people ask what makes Goa special, it ought to rank among the top three reasons. When joyless fiscal types wonder aloud why booze taxes are so joyously low in Goa, it should be held up as the modern-day equivalent of salt from Dandi beach (there’d be unrest if levies were any higher). When T-shirts declare ‘It’s Better in Goa’, the ‘it’ refers to beer.

Yes, King’s is as Goan for ‘beer’ as Foster’s is in Austrai-lia.

Sadly, the fate of this much-loved local beer brand is uncertain. King’s is under threat from invaders. It is at threat from both Indian and foreign labels that have trundled their way into Goa’s market in recent times, beer brands that have come armed to the teeth with marketing ammo and blistering budgets that are leaving tracks on more than just the sand. In fact, the place is pretty much under siege. As you head to Goa for a vacation or sundowner’s season break, you’ll find yourself being handed a bottle of Kingfisher, Budweiser or even Foster’s, instead of that one bottle of beer you came to Goa dreaming about.

Maybe. But we’re not alone. Deepa Rajan, a journalist in the Middle East, thinks a familiar bottle of King’s forms an integral part of the identity of the Goan beach—about as Goan as the Goan sausage chilly fry. “No holiday in Goa is complete without one,” she says. Other fans think they might as well be handing out bottles of King’s with boarding passes to Goa.

Let’s be clear, what we have in Goa is a Battle of the Kings. Beer bars, thus far used to selling the ‘King of the Beach’ and the ‘King of Good Times’, have been invaded by the ‘King of Beers’, Budweiser. The worst hit has been Impala Distilleries and Breweries, which brews King’s beer (and also the relatively unfancied Bello beer). It just cannot match the plastic power of the American brand going about entrenching itself; Goa’s famed beach shacks are lined with umbrellas of Budweiser, and there’s little that Impala can do about it. Nor can it hope to match the air power of the brand from Bangalore; plenty of planes flying their way in are essentially ads of Kingfisher streaking their way across the seaside resort’s calm blue skies.

Then, there are also Tiger and Carlsberg working up the froth. Over the past year, the action in the beer market has been furious, and not just by Goa’s easy-going susegad standards. The new entrants have grabbed enough bars by the chiller and beer drinkers by the gullet to give Impala an existential crisis. Counting both King’s and Bello, this Goan company has seen its market share shrink from 22.3 per cent to 4.5 per cent within a year. And this is a sizeable market. Tourists and Goans knock back about 3 million cases—12 units of 650 ml each—every year. This is only a fraction of the 117 million cases that the country consumes overall, but it’s voluminous enough to fight over.

The market is led by Kingfisher, which claims every second beer consumed in Goa. But the beer that’s drawing much of the attention these days is Budweiser; with its ruddy all-American appeal, this brand has been very aggressive. In the first quarter of 2009, it was projected to control 16 per cent of the Goan market; even if it managed to squeak into the double-digits in terms of market share (actual data is not available), it would qualify as a success, say observers.

But this isn’t really about the figures, it’s more about the little guy taking on the big guys in what looks like a losing battle. CBM Rebello, Impala’s technical director who’s been with the brewery for 26 years now, sounds disheartened. “We have our margins being eaten into,” he says sullenly, “we’re selling at a 20 per cent cut-down rate. We just hope people keep drinking [King’s], we’ll keep brewing beer till the time we can.”

While Bello has almost entirely been run out of the market, King’s is hanging in there on a fast thinning thread. A local identity ought to help, shouldn’t it? “It’s nice to hear from people like you,” says Rebello, “it’s the encouragement that keeps us going.” He is not a man given to bluster, clearly, and the current market scenario does not give him much cause for confidence.

The trouble is, King’s is getting squeezed out of the game at the distribution end, long before the beer drinker gets to exercise any choice. The big brewers, for example, have put in place exclusive deals with a vast network of hospitality chains, resorts, wedding caterers and the like, leaving a small player like Impala out in the lurch. Why, Rebello himself walked out of a contract for his daughter’s wedding because the venue organisers insisted that he blaspheme himself by serving his guests Kingfisher and only Kingfisher.

Such is the clout of brands that can afford to splash money around on everything from beer mats to calendars. It takes an insistent drinker to get King’s, an insistent drinker who sees the beer as an essential part of Goa’s charm, and won’t leave until he’s had his fill.

“When we launched in the late 80s,” recalls Rebello, “breweries in Goa were just about picking up, we were the only ones who made pints… Kingfisher came much later.” Impala has always been a family-run business, but is now in talks to rope in investors, perhaps even foreign investors, by way of private equity. Selling out to a competitor, though, is not on the cards. King’s intends to compete with them. And why not?

Pankaj Mullick, who wears a party organiser’s hat among many others, considers King’s the best breakfast beer in India. “For me, a beer is something you can wake up to,” he says, “unfortunately most Indian beers have such high glycerine content that you can’t drink more than 2-3 sips.”

Hey, remember that Johnny Cash number? ‘The beer I had for breakfast wasn’t bad, so I had one more for dessert.’ Or The Doors’ immortal ‘I woke up this morning and got myself a beer’? Music apart, consider the implications. The practical implications. You can drink it all day, and that’s the point. You can chug it when you like, how you like—no soapy throat. Amble around town with it—no ending up in a heap by the side of the road.

Rebello credits the use of Quepem water for King’s breakfast worthiness. It’s the brand’s local advantage. One that could well put it on a roll, given some extra word-of-mouth among tourists.

Call us sentimental fools if you must, but if we’ve got half a hand on the steering, looking down that long road to Goa (or even if we’re flying down in a billboard shaped like a plane), what we have in mind is King’s beer.

God forbid its going out of business. I pledge to soak my body’s weight in King’s! Hell, I might even mull that mule!