…for the trees. A startup called Afforestt shows how 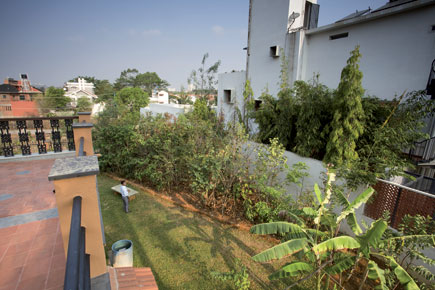 …for the trees. A startup called Afforestt shows how


A startup in Bangalore is planting miniature forests in cities. And that too, on patches of land that lawns or landscaped gardens would otherwise have occupied. Founded two years ago by industrial engineer Shubhendu Sharma, Afforestt has grown forests for clients ranging from Cisco Systems and the GMR Group to an eco-conscious infotech professional living in an off-the-grid house in Bangalore.

Afforestt’s forests are tiny. The smallest among them measures only 100 square metres in area—a little larger than a badminton court—while the largest is about 4,500 sq metres. But this is where the uniqueness of Afforestt’s approach lies. Sharma has borrowed the methods of 95-year-old Japanese ecologist Akira Miyawaki, who reforested thousands of hectares of land for firms like Nippon Steel and Toyota Motor, and has customised them for Bangalore’s tiny backyards. In doing so, Sharma presents an alternative to the water-guzzling lawns and decorative plants that dominate artificially laid out landscapes today. Ecologists say such lawns and plants do little to restore a region’s natural biodiversity or absorb sound and air pollution. In contrast, Sharma’s approach, or rather Miyawaki’s, is genuinely eco-friendly. First, Sharma’s forests use only indigenous species of trees, which are planted densely to mimic a real forest. This density is unusual—each square metre has at least three trees, which means that a badminton court patch can host nearly 250 trees of assorted kinds. Second, he restores the area’s top soil before planting them, again to mimic natural conditions in forests that are often hundreds of years old. This is needed because this top layer of soil contains plenty of organic matter and humus that are needed for plant growth (when forests are destroyed, this layer often suffers erosion, delaying restoration). Finally, the forest is watered and weeded for about three years, after which the forest eco-system becomes self-sufficient, says Sharma, with a variety of trees complementing one another.

Trees in such mixed forests grow faster too—at a rate of one metre every year, compared to an average of 10 cm seen on single-tree plantations. Sharma attributes this to better nutrients and micro- organisms in the soil because of the density and variety of trees. “Within 15 months, the growth becomes so uncontrollable that you can barely walk into the forest,” he says.

Miyawaki’s method were first developed in Japan in the 1960s. He was experimenting with the restoration of degraded forests—ruined by mining, overgrazing and other such disturbances. The prevalent theory back then was that degraded sites could not be restored to their original state in less than 150-200 years, since they had to go through a long natural cycle known as ‘forest succession’. A barren site, if left alone, would be expected to see different types of plants grow in a predictable sequence— annual plants, perennial plants, trees that do not tolerate shade and then trees that do. The last stage, after about a century-and-a- half, would see trees that can survive for very long and withstand disturbances.

Miyawaki suggested that instead of waiting for centuries, shade-tolerant trees could be planted right away by preparing the soil, restoring it with mulch, and planting saplings with fully developed roots. He argued and demonstrated that such plantations would thrive with minimal maintenance after three years and would begin to resemble 200-year- old forests in just 20 years. These methods found acceptance in Japan and then in Thailand, Indonesia and Malaysia, where Miyawaki has planted over 30 million saplings. He has also helped firms such as Nippon and Toyota reduce their carbon footprints by reforesting many hectares of land for them.

Sharma’s imagination was captured by the process in 2009, when Miyawaki visited Bangalore to help Toyota Motor’s reforestation programme near its local plant. Sharma, a Toyota employee then, signed up to help and was fascinated. “That’s when I thought ‘This is what I want to do the rest of my life’,” he says. Further, he realised that while most of Miyawaki’s work was on large plots, the ecologist had also popularised mini forests. Under Miyawaki’s guidance, Japan’s Jusco supermarket chain had planted tiny forests at hundreds of store locations. Inspired, Sharma began to experiment in the 70 square metre backyard of his home in Uttarakhand. It worked, and he began doing the same for customers.

But can Sharma’s tiny forests really be as effective as 200-year-old forests, as Afforestt claims?

Yes, to an extent, says ecologist TR Shankar Raman of the Mysore-based Nature Conservation Foundation. Shankar Raman, who has been working on restoration in India’s Western Ghats, says real forests serve several functions, and small urban forests can serve some of these but not all.

The first purpose of a forest is to let diverse species thrive. Afforestt’s approach scores on this count since it uses local species of mango, bamboo and amla trees that attract indigenous birds and animals. In comparison, plantations of popular alien species such as eucalyptus or Acacia Wattle, both from Australia, cannot attract such biodiversity here. Sharma speaks of his experience of walking through a eucalyptus plantation in India. “It was completely dead; there were no sounds of birds chirping,” he recalls. In contrast, an Afforestt site was found to have seven bird nests within an area of 100 square metres.

Second, the quality of a forest is gauged by its structure. A 200-year-old forest will typically have many distinct types of vegetation— herbs that grow close to the ground, shrubs that grow slightly higher, an understory of immature trees, and a canopy of treetops, apart from other foliage. These layers let many types of birds, animals and insects survive in the niches they create. It is unlikely that a 20-year-old urban forest can develop so many distinct layers, according to Shankar Raman.

The third criterion in assessing a forest’s worthiness relates to functions such as seed dispersal, pollination and soil formation. Shankar Raman says Afforestt’s sites may not achieve this quickly. “In the urban context, it is very hard to bring back these functions because the plots are typically small and surrounded by built-up areas. There may not be a sufficient number of birds in such a small area, for example, to pick up seeds and disperse them.”

However, he agrees that Afforestt’s approach is valuable and not too different from the one his own team takes to reforestation. And, of course, it is a huge improvement over decorative landscaping with lawns and nice-looking plants.

Meanwhile, Miyawaki’s method has found proponents elsewhere in India too. In 2010, after being trained at the Japanese Centre for International Studies in Ecology established by Miyawaki, VP Upadhyay, a director at India’s Ministry of Environment and Forests, began restoring chromite and iron-ore mining sites in Odisha. Five mining sites, ranging from 1,000-2,000 square metres in area, were reforested with local trees. Firms such as Sarda Thakurani Iron Ore mines and Tata Steel’s Sukinda Chromite mines from Jajpur and Keonjhar districts participated in this project, and it offers a template for the recovery of mining sites elsewhere too.

“If somebody is indeed using these methods to restore mining sites, it is good news,” says Shankar Raman. Mining, he adds, can be highly destructive since it sloughs off lots of top soil. Later, a few alien species such as eucalyptus and Acacia Wattle are typically planted as a measure to get some semblance of green cover. “That is not really restoration, it is reclamation,” he says. “Restoration means bringing back a diverse community of native species—which is challenging.” Given the success of the Odisha projects, Miyawaki’s methods could well find a lot more takers in India.