Been there, done that? Here’s a guide to the hottest new holiday spots 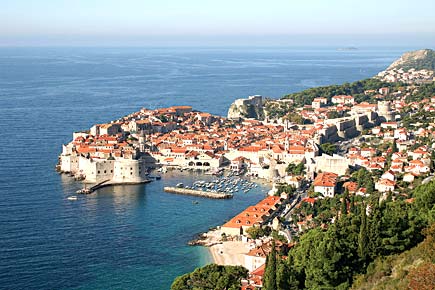 Been there, done that? Here’s a guide to the hottest new holiday spots


THEY’RE ALL THERE. In the folds of the world map. Where London and Paris regulars, those who’ve done these places to the last tube stop and bistro, aren’t yet looking. Destinations for those who are well ahead of the travel curve, for travellers who do not see the world atlas as a jagged cluster of shapes, but as live stories unfolding—of which they must be a part. Tanzania as a trail of ancient animal migrations. Croatia as a new political entity. Cuba as an island lost in time and space whose borders might soften this year if Barack Obama reverses a 50-year-old travel taboo for US citizens. Finland as a perspective altering experience. Vietnam as a tale of resilience. And all these as much, much more.

These destinations are fast turning into tourist magnets. The World Travel and Tourism Council’s 2008 report, for instance, ranks Croatia as one of the top ten countries expected to see in-bound tourist numbers swell most rapidly between 2008 and 2018. The latest Country Brand Index, a study of business and leisure travellers, lists Croatia and Cuba as emerging stars. Finland, meanwhile, is wooing the Indian traveller with promotions and special fares. Vietnam has become our own chosen hotspot because of its Indochina chic and affordability.

Best of all, they’re not Mexico, New Zealand, Italy or Spain, swine flu troublespots all. Go on, the fares are falling but the skies are holding up.

Because it’s The New Riviera where you can flop about in your whites. So you can race along the Dalmatian Coast, named after the 1,000 tiny black islands speckling the Adriatic coastline. And because this is the place where the Croat, cravat or necktie was born

For a country that only popped up on the world map a few years ago, after Yugoslavia’s collapse, Croatia’s got a quite a buzz going already. Concerned celebrities have been around to dust out the political debris. Bill Gates has come and gone, as have Matt Damon and Gwyneth Paltrow. There are well over eight million people passing through Split airport annually, and that’s not counting tourists who land in Zagreb, the capital. Last year, a reader survey by The Guardian and Observer newspapers rated Croatia as Europe’s third best travel destination.

What beckons? The astounding Dalmatian Coast, abutting the Adriatic Sea, whose end points in Croatia are the port cities of Split and Dubrovnik, both Unesco World Heritage Sites (the rest of the Dalmatian coast spills into neighbouring Montenegro). Between Split and Dubrovnik, you stumble on fortified seaside towns, Roman ruins and Diocletian’s decadent palace dating to 300 BC. Each of these are sites to remember, and you can drive, swim or navigate your way to them by car, aquatic selfpropulsion or traditional wooden ‘gulets’ with two sails, depending on how you like your millennial history, sopping wet or sun dried.

With limestone cliffs, sapphire blue waters, theatre and opera to go, what more could you want? Wine? Sure, they’ve been pressing grapes on Hvar, the new party capital of the Adriatic, since more than 300 years before the birth of Christ. They call the local white Bogdanusa, ‘God’s given Grape’. Quaff it down at the Carpe Diem nightclub in Ibiza-like Hvar, a hotspot on the international DJ circuit.

Get there, but don’t bother with a phrase book. Few of us Indians can wrap our tongues around their consonant cluttered language. You need just one word to get about: ha-vala. No, don’t reach for your wallet, that’s ‘thank you’ in Croat.

So you can say that you’ve stared at the midnight sun, dined by one of its thousand glimmering lakes and gastro-orgied on crayfish, Baltic herring and vodka. We say, why not Finland?

Who’d believe that this quiet Nordic country with art nouveau monuments could have such edgy history? Finland had barely finished battling unrest during World War II and the ensuing Cold War when a global economic downturn led to a ghastly depression in the 1990s. The late 90s brought it back in the news, when Nokia burst onto the international scene to revolutionise the mobile handset market. Since then, there has been no looking back for this fast-emerging industrial giant. With more than five million visitors arriving at Helsinki airport every season for a peaceful summer’s evening spent over wines and views, a chance rendezvous with a lynx in the woods and tea with Santa Claus, Finland is now the ‘it’ thing.

A child of the sea, Helsinki has the world’s purest neo-classical architecture to go with neat 20th century Finnish design, all of which you can negotiate on foot or by ferry. The perfect place to admire these lines is from the vantage of a terrasit, an outdoor summer bar. Especially in June, when daylight starts to stretch till midnight, when restaurants and outdoors museums throw open their doors and the cruises set sail. Ah, the sight!

Extreme foodies will love the chance to stick their forks into off-the-usual-menu meats such as pheasant, reindeer, hare and grouse, with side orders of wild berry compotes and delicate morels topped off with fro-yos (frozen yogurts).

Indian travellers have never had it better or more convenient with regular direct flights now available from Delhi to Helsinki. And the promise of a holistic holiday experience has catapulted this quiet country up the popularity charts. “We have noticed a 28.9 per cent increase in tourist inflow this year (till March 2009),” says Papori Bharti of the Finland Tourism Board, India.

This summer, the numbers are likely to go up to 75,000. Hotfoot but don’t hurry. Take your bathing suit for an authentic spa experience a la Finland. Travel website Fodors.com says, ‘There are 1.6 million saunas in this country of just over 5 million people—even the parliament has its own sauna.’ Imagine that.

Because Fidel Castro can’t hold out much longer. And because Barack Obama could lift a 50-year travel taboo for US citizens, which could change everything from Cuba’s mood to its music

We’re so ready for Cuba and don’t even know it. For every commie-revolutionary wearing a Che T-shirt, there are Page 3 photos of celebrities with Cohiba cigars poking out of their mouths. The Mojito that most of our city barboys have been muddling up with rum, mint, lime juice and sugar was what Castro and Che tippled at Havana’s La Bodeguita Del Medio. Just as every proud indie film fiend has a copy of Buena Vista Social Club, every Indian TV dance show has mandatory salsa, rumba and the mambo rounds—throbbing with the clave, the musical heartbeat of Cuba.

What we haven’t loosened ourselves up to yet is the actual raw sensuality and rhythms of the western hemisphere’s first communist country. Time still hangs heavily in the crumbling period architecture of this Caribbean isle, and in a riot of styles that span gothic, art nouveau to art deco and po-mo. There’s also the psychedelic public art of Habana Vieja, the colonial grandeur of Trinidad and throbbing streets of Santiago. Recognising these living museums, Unesco has classified Trinidad, Cienfuegos and Havana as world cultural heritage.

You get to see all this and the quiet thrill of bumping along in limegreen 1940s Dodge cabs. Cuba is obsolete-American-auto country, where gas-guzzling Studebakers, Plymouths, Buicks and Chryslers still rule the roads in their metallic hues. Hire one of these and drive down 100 miles from Havana, where you can scuba dive in the historically notorious Bay of Pigs and come up for air and a lobster lunch. The Cuban archipelago has—hold your breath—525 dive sites. Get under. Before heading back, stop off at the Tropicana Nightclub. The mambo, mojitos and Cohibas may fade, but your hips? They’ll always have that telltale Cubano twitch.

Because Thailand is getting flattened out by haversackers, and Indochina is oh-sooo-chic. And we get something new, something old, which is affordable, while whistle-stopping between Hanoi, Saigon and the Mekong Delta. There’s also a digital countdown to 2010, when Hanoi turns 1,000

Move over lush green meadows of the Swiss Alps, and make way for the swaying rice fields of Vietnam and the stylish sophisticated French colonial buildings of Hanoi, painted in muted shades of jade-like celadon. For a country that started opening up just ten years ago, Vietnam is suddenly aglow, with 4.25 million foreign visitors trooping in—of which nearly 65 per cent are Asian tourists.

The present slowdown has brought Vietnam into sharp focus for Indians who want something exotic and unique which fits a thrifty travel budget. You can swing a nine-day, eight-night deal for Rs 39,000 per person (sans airfare).

A land steeped in history, Vietnam’s got culture, restful landscapes and a unique pho-factor, the national dish of beef and noodle soup that can addle your mind with its aromatics. Hanoi, which houses French architecture and ancient pagodas, is now a trendy art capital where traditional eastern arts segue with impressionism, cubism and contemporary trends.

Like Hanoi, Saigon or Ho Chi Minh city will stun you with its architecture and food. These are places where you eat the streets: the Banh Mi sandwiches, pho-broths and sticks impaled with every imaginable bit of marinated meat, charred over smoking grills. The ancient capital of Hue allows you a glimpse of the Halls of Mandarines and forbidden Purple City. Also waiting is the 200-year-old Tam Ky ancestral house in Hoi. Visit, you’ll come back pho-yant

Trammelled by the IPL hordes, South Africa is just the starting point for the Dark Continent. For raw experience, Tanzania is it. Home of proto-humans, the palm fringed beaches of Zanzibar, snowy reaches of Mount Kilimanjaro and wild beauty of the Serengeti

Tanzania is where you head to when you want to feel the earth move. When over a million wildebeest and zebras migrate from the Serengeti and the Ngorongoro Conservation Area to the Masai Mara reserve in Kenya late May to July. It’s one of the largest wildlife migrations on earth, imprinted in these primal beasts before the calendar existed. This is where lions, giraffes, zebras, steeds and every other wild being is said to be “bigger, stockier, stronger, and sturdier than elsewhere in Africa.” Till 2008, Tanzania attracted nearly 724,000 visitors (Indians a mere 15,000). The Tanzanian Tourism Board is fixing this by offering holiday packages that combine safaris with white sands. Be warned, these are an average Rs 1,60,000 per person. But then, there’s Mount Kilimanjaro, Lake Tanganyika, Lake Victoria and Dar es Salaam, the Cradle of Humankind. Where it all began.