One man who has a peculiar interest in stepping on India’s borders describes some odd sightings. 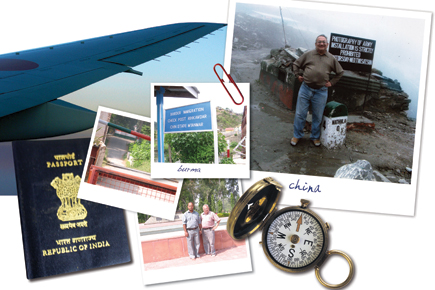 One man who has a peculiar interest in stepping on India’s borders describes some odd sightings.


The border is the last step before my land becomes their land. That imaginary line has been a source of endless fascination for me. In 2008, I went to the Wagah border to see the flag lowering ceremony. I came away disillusioned. It was just a tamasha. The following day, however, proved more worthwhile. We went to Firozpur, a busy town about 120 km south of Wagah. Then we drove to Hussainiwala, 10 km away, crossing the great Sutlej River. The narrow road suddenly became desolate. It ended at an army check-post. The area here had witnessed a fierce battle with Pakistan in 1971 but there was hardly a soul now.

We approached a Border Security Force sentry and requested him to let us go to the border. He led us across a three-metre high earthen mound. A few steps away a double fencing indicated the end of Indian soil. Pakistan lay across. There were fields on either sides of the fence tilled by farmers from nearby villages. “We protect our farmers when they have to work in their fields,” said the BSF jawan. “And when Pakistanis come to work in their fields, we keep a close watch.”

On the way back, we visited Khem Karan, another border site. Here, in the 1967 war, the Army had breached a neighbourhood canal and converted the fields into marsh, trapping Pakistani tanks. At the gate of a small fortified area near the barbed fence, the bugle sounded, indicating that the flag lowering would begin. Unlike the madding crowd at Wagah, there were just four of us. We saluted and sang Jhanda oonchaa rahe hamaraa.

After lowering the flag and storing it safely, the sentry took us to the fortification. The nearest Pakistani village is just one kilometre from there. We could see the Pakistani post. The barbed fence inbetween was on Indian soil. The sentry pointed at something a few metres beyond the fence—a small whitened marker stone. “That’s the actual border,” he said.

HOW TO HUG A CHINESE SOLDIER

In 2007, we took a five-hour drive through Sikkim’s rugged mountains. It was a lifeless terrain dotted by a few tiny villages and army camps. The air was thin and it left us breathless. We had to park a good 400 metres from the actual border. From where we parked, a road was seen winding towards a small hill, on which the Indian flag was fluttering. “You will have to walk up there, sir,” our guide told us. Stopping every 15-20 steps, sipping water, catching my breath and walking again, I took a good 30 minutes to reach the base of the hill. A milestone read ‘Nathu La, 0 km’. A few jawans stood here and there. We went uphill and halfway to the top, an epitaph to the martyrs of the 1962 Chinese war read: ‘When you go back, tell them of us and say that for your tomorrow we gave our today.’

I climbed a few more steps and saw a small building meant for frequent meetings with visiting Chinese officials. About 100 visitors were on our side of the border but none on the other side. Chinese soldiers stood on guard there. One could shake hands with them across the barbed fence or put an arm over their shoulders. I saw the road that wound into China. At the Chinese gate, there was a big red banner with golden letters in Chinese script welcoming travellers. But there were no travellers there waiting to enter.

“It is so easy. Walk straight for about 2 km and you will be in Nepal,” a man in Raxaul, a town in Bihar, told us. “Or take a tanga for 100 rupees.” We negotiated and got one for Rs 70. The tanga went on smooth roads, and through slush and ditches, and finally over a small wooden bridge across a dead brook. All of a sudden we were in Beerganj, Nepal, a foreign country. There was a Nepali checkpost a few metres ahead but there was no one checking.

After wandering in Nepal for a few days we arrived, again, at Beerganj on our way back. It was not dawn yet. A solitary tangawala at the bus-stop said he would take us to Raxaul for six rupees. As we approached the checkpost, he said, “Keep your documents ready.” We told him we didn’t have any. “They must have given you the papers on the way in. That is enough,” he said. They hadn’t given us any. “My God, there could be a problem,” said the cart driver. “I can take you on another route avoiding the checkpost. But it will be Rs 200 each.” Ah, so that was the trick.

We asked him to go straight ahead. We would take our chances. The same wooden bridge, the same ditches, the same dirt, the same paved road and we were back on our land. We got down at the Raxaul bus station and paid Rs 6 as agreed. “Give me some more please. After all you had a smooth drive,” he begged. We gave him four rupees more.

In 2004, I was in Rajashahi, Bangladesh. I drove to the banks of the Ganga to check whether I could see India across the river. The river was the border. It looked like a sea. It stretched to the horizon. I couldn’t see anything beyond. After a few days, we drove to Feni in central Bangladesh. Very close to our destination, my friend Rafique said, “The Indian border is quite near from here.” The driver added, “Just look across the marshy land and you may see your national flag.” And indeed, it was there. What I was seeing was Tripura. From a foreign land getting a glimpse of my country was strangely reassuring. For a few more kilometres, India remained with me and then slowly disappeared from sight.

THE HALF BRIDGE OF MYANMAR

From Champhai, in Mizoram, the Myanmar border is just 45 km away and Rih Dil lake, a holy place for Mizos, is 3 km inside Myanmar. Every Mizo regrets Rih Dil being in Myanmar. At Zokhawthar, the last village on the Indian side, we hit a small bridge. The actual border is half way down the bridge. One half of the bridge is in India, the other half is in Myanmar. The iron railings of the bridge on the Indian side are painted white, and on the Myanmar side, they are painted red. We walked across the small bridge. We were in Myanmar.

The Myanmar immigration official issued a daily pass. Rupees were converted to Kyats, the Myanmar currency. You can drive in Myanmar up to Rih Dil. The locals cross the border casually—on foot, on two wheelers or in buses. Some were swimming in the river below.

Within a few feet into Myanmar, rates for merchandise are quoted in kyats. One kyat was officially about Rs 7.50. But in a Myanmar village we got 20 kyats for one rupee. On the return journey, I noticed that there was a Myanmar flag on their side but on the Indian side there was no flag. “How come?” I asked a soldier. “Today is Sunday, sir. No flag on Sundays,” he said.

There are very few land routes to Bhutan. Jaigaon in West Bengal is the source of one. Tourists go across into Bhutan just for the satisfaction of having visited a foreign country. Many locals go over to purchase petrol and other commodities which are cheaper there. Indians require only an identity proof. You know from a distance that you are approaching the international border because a tall canopy welcomes you. Cross it and suddenly the buildings all have green tiled sloping roofs and all the men are in gowns with a sash, Bhutan’s national dress, kho. And once again, you are in ‘their’ land.