Tired of the same old toys, Bangalore’s Toy Lab is changing the game with interesting innovations 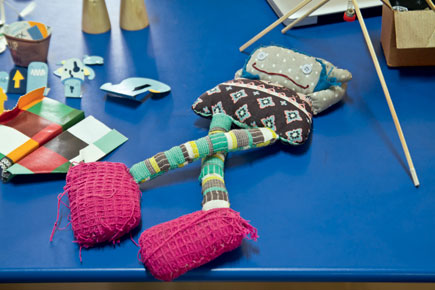 Tired of the same old toys, Bangalore’s Toy Lab is changing the game with interesting innovations


The Toy Lab at Srishti School of Art Design and Technology in Bangalore is a small room with glass windows and cardboard cutouts of trees. Here, a group of grown-up students, under the guidance of interaction designer and toymaker Anders Sandell, take toys very seriously. They break down toys and put them together again in a different way. In many ways, that is how children play. And from these experiments evolve some intriguing new toys. Like The World of Camisola, Ik and Khoya.

The World of Camisola is a comic book set on a beautiful island and revolves around the adventures of a little girl, Safar, and her cat, Kuchi-Ku. Its creator, Constanza Mahaluf, a 25-year-old Chilean storyteller, says the comic “loves to be left on the bathroom floor, being used as a coaster and getting picked up by fingers full of sticky food”.

For young readers, Safar’s adventures are as much theirs as Mahaluf’s, whose own life has been adventurous too. She had spent three years studying mathematics back home when she gave it up to visit the Subcontinent. She learnt to cook and give a good massage in Dharamshala, worked in Nepal, and then sent out lots of emails to universities in India to pursue a course in graphic design. “Srishti was the only institute that replied,” says Mahaluf. “It was the best thing that could have happened [to me].” Now in her third semester at the Toy Lab, Mahaluf has created a comic book with paper toys that you cut and make as you read. So, the reader can offer a tired Safar a cup of chai or build her an aeroplane that will fly her to safety.

Ik, another new game, was created in the very same room at the Toy Lab, this time by 21-year-old Ragini Ramanathan. Ik is a drainage hairball that travels by the flush, down the drain to Sudland, and discovers new friends. Written in limericks, this waterproof book is part of a complete bathroom set for five- to eight-year-olds.  “Normally, all the characters of my story are considered ‘gross’ by kids,” says Ramanathan. “But toenails and ear-wax are pretty useful stuff till we discard them. So in Sudland, fingernail clipping Nuk, who likes to be referred to as a finger protector, is an important person. Nuk explains to both Ik and the reader how he protects their fingers and is clipped only when he grows too long.”

So discovers Ik as he travels down the drain, first resisting the new surroundings, then opening up to new friends and finally discovering the beauty of Sudland with its amazing bubbles. And as children splash in their bathtubs and read, they can scrub themselves clean with an ear-wax lemon soap or surround themselves with a zillion bubbles by exploding toenail bath bombs.

In a market flooded with “low-quality plastic toys linked to cartoons and movies”, Sandell and his students are looking to create toys that have the “magical ability to light up the imagination”. From a ‘blank toy’ that can take any shape and colour in a child’s hand, to wearable puppets that tap into a child’s fantasy of dressing up as different characters, this lab works at bridging the gap between what children want and what they end up getting.

“Kids can have very sophisticated tastes,” says Sandell, who doesn’t like the general aesthetics of today’s toys and finds toy stores depressing. Set up in 2009, the lab aims to create new heroes, blend technology with the outdoors, fire the imagination and also make toys that introduce young people to the realities of the world they live in.

Their most successful game is neither Camisola nor Ik. It is Khoya, a series of interactive narratives on the iPad. It is in this beautifully illustrated, 16,000 word story that the Toy Lab has found its first commercial success.

The interactive fantasy adventure, presented at the 2011 Wired conference held in the UK, is an experiment in new media and multi-sensorial storytelling, and is ironically inspired by the yesteryear hit, Khoya khoya chand. In Khoya, the user becomes the navigator who guides Maya and Talisma in their quest for lost natural wonders. Using an ‘in-app camera’, the reader can take photographs and also keep a journal of his or her adventures.

Khoya’s creator is Shilo Shiv Suleiman, 22, a Bangalore girl who illustrated books for children and was afraid of technology till she started work at the Toy Lab a year-and-a-half ago. “At the Lab, I discovered that technology is magical,” says Shilo. “In any case, today’s kids aren’t reading as much. But with this interactive book, they will have to read all 16,000 words because the story will not proceed unless they do. There is a lot of interaction, but it also forces children to read.”

Shilo remembers spending most of her childhood in her Bangalore home’s garden, so she made sure that her story about how “the natural world has been lost and how it can be found” required children to take their iPads out into the garden and take a good look at nature.

Sandell also tries to talk about the environment in his story, Jo:rgits and the End of Winter, which is about a group of aliens from a dying planet who crash in the middle of Helsinki (where the author grew up). “It is set against the backdrop of global warming,” he explains. “As the aliens discover Helsinki, the reader finds out about greenhouse gases, goes on a scavenger hunt within the book, and can even don a chef’s hat by reaching out for a recipe inside a fridge in the story and trying it out in the kitchen.”

There are several other enthusiastic people from all over the country inventing toys. Under the shadow of a Black Sabbath poster, Mumbaikar Abrar Burk brings to life clans inspired by the “fantastical stories” he read growing up to create an interactive comic book, The Last of Us. Set in 2090, this “war-craft” game for teenagers lets the reader use printouts and paper toy templates to build a comic world in one’s own room.

Ankit Modi took his love for music and building blocks to create Legonome. “I wanted to build sound,” explains the 21-year-old from Chennai. “The idea is to help a child build a shape and relate it to a sound. And in the process, they can create a tune on the Legonome as they play Lego.” So for each building block that is placed on the base, an associated note is heard. And as the process continues, a tune emerges.

Alannah D’Souza’s game, Grub, began with interactive puppets. The game comprises a set of four hungry monsters that show instinctive behaviour when you play and attack. While one puppet “vibrates and trembles in fear”, the other lights up when scared.

Slowly, Grub gave way to Uncommon Sense toys. These interactive sensory toys encourage social interaction among children with autism. And in it, the Lab has found its second success. Designed to “aid collaborative play”, the toys respond to a child’s actions, gestures and voice with sensory feedback by way of sound, light and vibration. The idea is to help children with autism realise that playing with others can be fun.

The toys are currently being developed in collaboration with Bangalore’s Academy for Severe Handicaps and Autism (ASHA). “We are conducting a research study to evaluate the impact of these toys on various developmental areas—motor, cognition, sensory. And to understand how, through play, children can be motivated to interact,” says 23-year-old D’Souza.

The Toy Lab intends going back to basics on every debate related to the world of toys and children. “In every home, you will find boxes piled in a corner with toys that no one plays with,” says Sandell, who is also collaborating with artisans from Channapatanam to create wooden action figures inspired by the Mahabharata. “Mass-marketed toys are not carefully designed and break easily. They are single purpose toys that are not made to be handed down to a younger sibling.”

Ishita Dharap was fascinated by the fact that all kids like to dress up and traipse around the house pretending to be someone else. From this fascination were created Iddhu the Octopus, four-limbed Qin and Slope, a snake that likes to wrap itself around the neck.

Growing up in Panchgani, Rudransh Mathur was an outdoors person. So it was but natural that Top Spy, the game he has created, is a location-based gaming program for the iPad and iPhone. But to become a Top Spy, you need to get off your chair, walk in your neighbourhood looking for clues, collaborate with fellow spies and then complete your mission. Complete with a spykit that can be downloaded, along with weapon printouts, Top Spy incorporates the outdoors with the indoors. The game also uses augmented reality tools to make sure that the player feels all the thrills of the chase. “The medium is already very engrossing and all I wanted to do was incorporate the outdoors as well,” explains Mathur, who is looking for a tie-up with a gaming firm to market Top Spy commercially.

Breaking toy stereotypes is an essential part of the project. Here, in this little lab full of cardboard cutouts, pink is not necessarily the only colour for dolls and GI Joe not the only action figure. Working on the fact that “every culture has its own particular flavour”, the Lab’s toymakers are working on black as a play colour to fire the imagination and on Bheema as the country’s next action hero.