Inhaling whiffs of its history along with steaming cups of cappuccino 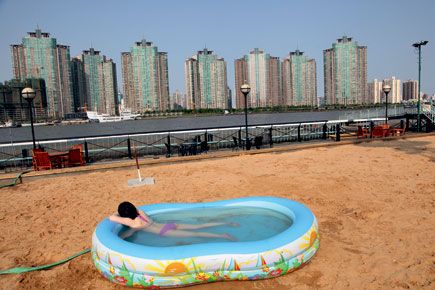 Inhaling whiffs of its history along with steaming cups of cappuccino


‘Shanghai thirty years ago on a moonlit night… In old people’s memory the moon of thirty years ago was gay, larger, rounder, and whiter than the moon now. But looked back on after thirty years on a rough road, the best of moons is apt to be tinged with sadness.’

So begins The Golden Cangue, a short story by Eileen Chang (1920-1995), one of China’s most beloved 20th century writers, whose work is taut with the terror and resourcefulness of people caged inside lives they did not choose.

Eileen Chang was an embodiment of Shanghai at the time—sophisticated, multi-lingual, many-faceted, with a voice unlike any other. At the time of Chang’s birth, swathes of Shanghai were still administered by Westerners whose antecedents had snatched patches of coastal China in the Opium Wars of the mid-19th century and secured footholds for a thriving opium trade. That arrangement was first formalised in the 1842 Treaty of Nanking.

The treaty ports, as these concessions were called, subsequently attracted an international crowd of fortune hunters, architects, refugees and merchants. Shanghai, in particular, became a jewelled canvas of wealth, of architectural wonders, a centre of entertainment, arts, fashion. The world’s beau monde, as well as its intellectuals, artists, philosophers washed up in Shanghai; even Rabindranath Tagore came to deliver a series of lectures in the 1920s.

Further inland, China had suffered natural disaster and popular revolts. The last Chinese emperor fell in 1911. Barely had a brave young republic struggled to its feet, when China’s intermittent skirmishes with Japan ballooned into a vicious war in 1937, ending only with Japan’s 1945 defeat in World War II. The very next year, a bloody civil war between Chiang Kai-shek’s Nationalist army and Mao Zedong’s Communists—conflict that had ebbed and flowed since 1927—took centre stage and China convulsed again.

Shanghai’s raucous metamorphosis culminated in May 1949 when the Communist army, clad in simple uniforms and cloth shoes, quietly walked through the city that used to be called the ‘Paris of the East’ and took over the reins.

Visitors who are bitten by a melancholic curiosity for that vanished, extraordinary era in China, can wander the streets of Shanghai and still inhale whiffs of history along with steaming cups of cappuccino.

It so happens that the building where Eileen Chang lived with her mother and aunt in 1939 and then again between 1942 and 1947, still stands at the corner of Nanjing Road West and Changde Road, located in what used to be the International Settlement. Shanghai was home to a plethora of foreign architects and the city was mad for Art Deco buildings, with their clean lines, vertical external patterns and protruding balconies with curved ends, reminiscent of an ocean liner. Eddington House, as it was known, was sponsored by an Italian real estate businessman and completed in 1936, with just such Art Deco elements.

The space at the ground floor has been given over to a charming little café-cum-bookstore called Colorful. (195 Changde Road)

The café serves light, decent meals—a pesto penne, sandwiches, a mocktail of mixed fruit juices called the Eileen special. The owners have perched an old-style gramophone in a corner, framed the scene with flowered wallpaper and the bookshelves are lined with Eileen Chang’s works.

I went on a recent spring afternoon with my toddler daughter Lia and Sarah K., whom I’ve known since college, twenty-five years ago. She and I first came to China as students in 1988; we have spent half a life in these parts. We sat in the Colorful Café patio and talked about ordinary things—Sarah’s broken hand, now healing, Lia’s naptimes. Lia threw a ball around and charmed the waitress. The Chinese cannot resist children, and think foreign babies, ‘yang wah-wah,’ particularly enchanting.

Inside, a soulful young woman sipped tea alone. At the window, two men conducted a solemn conversation, leaning forward. Occasionally, they glanced at Lia and smiled, as she waved at them through the glass panes.

The whole spot seemed to recognise that upstairs, a woman sat at her desk and to the sound of trams rattling on the street outside, gave words to a fraught age.

If the visitor to Shanghai had time and energy, s/he could walk eastwards, the length of Nanjing Road with its polished malls and honking traffic. This Shanghai artery was once called Bubbling Well Road and sliced through the former International Settlement.

The walking visitor would emerge at a section of Shanghai’s riverfront known as the Bund. On the north corner, the visitor could gaze at a magnificent building once known as Sassoon House and its companion Palace hotel across the street on the south, with the churning Huangpu River in front.

On Sunday, 19 July 1931, Australia’s Sunday Times newspaper blared on its front page: ‘Sir Victor Sassoon Forsakes India for China, A Blow to the Country.’ The reporter in Calcutta had interviewed Sir Ellice Victor Elias Sassoon (1881-1961), the Third Baronet of Bombay, born a Baghdadi Jew with deep roots and expansive family business interests in India and China. Sir Victor Sassoon said, “It looks as if India, under the Swaraj, will have a great deal of internal trouble. On the other hand, China is now getting over her civil wars and other troubles. There is a general feeling in India against the foreigner developing the country, which they call exploiting, but in China they are only too glad to welcome the foreigner who is working for ‘China’s interests’.”

Sir Victor had wound up his sprawling empire, leaving only a few enterprises in cotton, jute and shellac, and was already packing up for Shanghai, getting ready to say farewell to the Viceroy of India and numerous other friends. He told the paper he could not compete with the small overheads of local Indian firms and India’s political instability was tough on business.

He had already established a commercial presence in Shanghai. He’d hired prominent architecture firm Palmer and Turner to design Sassoon House, now the Fairmont Peace Hotel, which was completed in 1929. It housed the Cathay Hotel—the plushest hotel in the Far East—along with the offices of ED Sassoon Ltd and Sir Victor’s penthouse.

A few nights ago, we went to the hotel’s Jazz Bar, which used to be called Horse and Hound, where a band still plays old American and British tunes—Moon River, When Irish Eyes are Smiling, Yankee Doodle. The players are white-haired Chinese men with an average age of 77, who have been playing at the hotel for decades. The band struck up energetically enough, though I swear I heard someone wheeze into the mike.

I drank more margueritas than I should have. My wiser, more moderate husband ordered orange juice.

Over the music, we talked about the opaque politics in China, the corruption. That’s what everyone talks about in Shanghai these days.

An American diplomat friend mentioned tedious official Chinese banquets and then we speculated on how expensive they must be for the hosts. The US ambassador to China, Gary Locke, last year stirred a storm of appreciation on Chinese websites, after somebody snapped a picture of him at an airport carrying his own bag and buying himself a cup of Starbucks coffee. The picture, posted on the internet, ignited China’s internet commentators. How unlike Chinese officials, who had crowds of staff attending to every whim, they twittered angrily.

Our Indian diplomat friend had recently visited a giant Buddha built in the neighbouring town of Wuxi and said that all the names were in Sanskrit.

The gift of the evening, musically speaking, was the band that came on at 10 pm, after the older men shuffled off. In 1920s Shanghai, jazz cabarets mushroomed and moneyed foreigners could watch American jazz orchestras play in the classy hotels of the International Settlement and French Concession.

One could be forgiven for doing a chronological double take when, on that spring night in Shanghai in 2012, Florida-born Theo Croker came on, sporting dreadlocks and a shiny suit.

He put his trumpet to his lips; the others picked up drumsticks, lifted a saxophone. They closed their eyes and proceeded to tear up the old room’s wood beams and shred the river outside to pieces.

The Yangjing Creek, one of Shanghai’s many waterways, divided the International Settlement from the French Concession, the portion of Shanghai the Chinese allotted to the French in 1849—for the French would not be left behind the English. Early on, the creek was filled in, paved over and is still Shanghai’s main east-west thoroughfare.

At the turn of the previous century, a chorus of socially conscious voices gathered momentum in the West; there were protests against a vile opium trade. Shanghai still lived and breathed opium, but following a series of anti-opium conventions—one of which was held in February 1909 right across the street from Sassoon House—Shanghai’s British-dominated Municipal Council banned opium dens and gambling houses.

The vice trade simply picked up its skirts and crossed the road to settle in the French Concession where the British police force—bulked up with Sikh garrisons—had no jurisdiction.

In Shanghai’s much smaller French Concession, the streets were named after French heroes. The French administration, which had fewer resources, entered into unholy alliances with Shanghai’s underworld to help maintain law and order. The Chinese called it “using poison to attack poison.”

Huang Jinrong, known as Pockmarked Huang was the chief police detective for the French, as well as an underworld ‘big potato.’

His protege, Du Yuesheng was called ‘Big-eared Du,’ and in 1918, the two of them set up the San Xin company. They added a third man, Zhang Xiaolin, who had military connections.

The main occupation of San Xin Corporation was to smuggle in opium, stick on a respectable San Xin seal, obtain a tax receipt and sell it back into the market.

The San Xin Corporation was eventually housed in a graceful 1932 building designed by French architect Lafayette. It is situated just opposite an old Russian orthodox church and is currently Shanghai’s best boutique hotel, as voted by TimeOut Shanghai.

The Mansion Hotel (82 Xin Le Road) features the grandly named Han Lin Gold Palace Sharks Fin Seafood Restaurant, where my husband and I went for dinner one night and were rewarded with Chinese dining experience at its finest. We had a room to ourselves, a large round table with a snowy tablecloth, fragrant towels to wipe our hands, discreet yet attentive service. We were in the mood for a simple meal, so we skipped the shark’s fin and abalone and ordered mixed vegetables, broccoli sautéed in garlic, hand-wrapped wontons in soup, all to be washed down with chrysanthemum tea. We also ordered one cold dish of ‘Mouth Watering Chicken,’ but that was an amateur mistake, to order a Sichuan speciality in a Cantonese restaurant.

Nibbling at our food, we raised eyebrows at each other over our chopsticks, for the broccoli was done to perfection, the mixed vegetables—a medley of lotus root, peas in their pod and lily bulbs—was a treat. Our hand-wrapped wontons came in a bowl of light-as-mist broth, with a sprinkling of chopped spring onion.

We lingered afterwards in the lobby, crammed with displays of 1930s artefacts—the obligatory gramophone, but also an early camera, water-heating stoves, an opium pipe delicately carved with ivory, gambling chips, property deeds, a tribute to Du Yuesheng penned on his 60th birthday.

Like opium, Shanghai has an addictive quality to it.

‘It all used to seem far away, and now it seems not far at all,’ Eileen Chang wrote in a preface to a collection of novellas. ‘But it is autumn still, water-clear and mirror-bright: I ought to be happy.’