If you think vegetarian food is about paneer and dal, you’re from another age. It’s now haute cuisine, costs a bomb, and comes from the most unlikely of food cultures. Welcome to the new pinnacle of luxury. 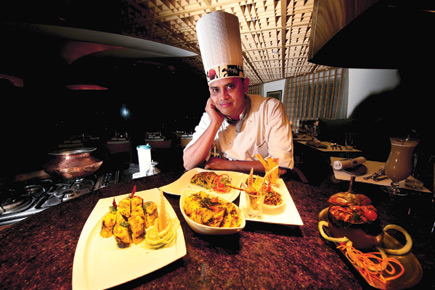 Vegetarian food is now haute cuisine, costs a bomb, and comes from the most unlikely of food cultures.


One does not know if Rip Van Winkle was a vegetarian, but if he was and he woke up, a tasty new world would be his to discover. If he walked into a restaurant and looked at the menu, gone would be the paneer and dal, even the roti has all but disappeared. That world has changed forever.

At a recent wedding bash, the Dalmiyas, an old Delhi business family, turned on a culinary storm that underlines the dramatic change that vegetarian cuisine in India is undergoing. It is actually a gastronomic revolution. They wanted international food, and it had to be all one hundred per cent vegetarian. And what a delight it was as they and their invitees gathered for the feast at Delhi’s Park Hotel.

How is this for starters: Gorgonlola stuffed fried olives, and don’t miss taking a second helping of feta and herb-stuffed Californian prunes. If you cared for some, there was artichoke and herb empanadas on call. The main course was no less exciting. In Italian, you could go for barletta bean ribollita. French food was represented through wild mushroom fricassee to be partaken of.

The dining assembly was also game for some delectable Spanish fare, and so herbed artichokes with bell peppers and cider was dished out. But the world was not enough, apparently, and Peru came to mind, the country that’s the new Japan as far as food trends go. Sushi is passé now, so it’s so zucchini carapulcra—served with chocolate, cumin, peanuts, port wine and coriander.

“Vegetarian patrons have the money; they are well travelled, and want the world. Ingredients which are fresh and not preserved, preferably organic, exotic and rare, local—these are in fashion,” according to Bakshish Dean, the master of that particular feast at the Park.

Agrees food consultant Marut Sikka, “What has changed is choice. While India offers an endless world of vegetarian cuisine, the foodie wants the world. It is not unusual to cook entire meals from exotic foods. Some of the tastiest vegetarian food, from Italian truffles to Kashmiri guchi morels, can cost more pound for pound then even Kobe beef. Here, we’re talking upper-end clients who know what they want.”

Even cuisines that you would not normally associate with vegetarianism are receptive to this change. At the legendary Japanese restaurant Sakura in Delhi’s Metropolitan hotel, Chef Hitoshi Shigaki has this to say: “I was truly surprised by the number of guests wanting Japanese food. It was both a challenge and pleasure to serve them Japanese food. A lot of Japanese food evolves from vegetarian dishes. They are at the base. Here in Sakura, cha shoba (green tea flavoured buckwheat noodles) is particularly popular.” In Mumbai, at the Taj Mahal Hotel’s signature restaurant called Wasabi by Morimoto, the veggie exotica trend is in full play. A large number of guests being vegetarian with deep pockets has spelt innovation after innovation. “We do a lot of vegetarian food at the Wasabi. It is a response to the fact that the guest increasingly wants vegetarian food from Japan. We have been delighted by the response that our food has got. In Bombay and Delhi, at Masala Art, our vegetarian food has an added advantage of having olive oil as a medium, and this is relevant to those who look at health as a priority while eating out,” says Sarita Hegde of Taj Hotels.

GLOBAL WARMING AS CAUSE CELEBRE

With global warming becoming a hot potato, vegetarianism has increased worldwide. Environmentally, the carbon footprint of a cheeseburger, according to Discovery channel, is about 3.1 kg per burger. In the US, where an average citizen eats 150 burgers a week, that translates to 428-465 kg of greenhouse gas per person, per year—the rough equivalent of the annual carbon output of 7,500-15,000 SUVs. Thus, in India too, switching from lamb and chicken to vegetarian alternatives is being touted and seen by some as a planet-saving move.

“A lot of our customers are converts to vegetarianism and demand variety. Since they have recently left meat, enticing them with new ingredients is the key. We have a host of innovations… vegetables like white asparagus, sugar snap peas, Belgian endive, radicchio and dragon fruit. Even in mundane things like cereals, we have a whole new menu really, with organic cereals like polenta, mushrooms like white truffles, whole wheat pastas from Italy, and so forth. The point is, when you make the switch, you do not feel as if you have left something behind. Genuinely, vegetarian food has much more variety on offer, compared to non-vegetarian food,” claims Ravi Saxena, executive chef at Delhi’s Claridges.

The trend has also got a leg up from India’s vegetarian celebrities. This is an elite club that oozes money and fame. From Amitabh Bachchan to Karisma Kapoor, from Mukesh Ambani to Prime Minister Manmohan Singh, they are all vegetarians. In fact, the White House dinner that US President Obama hosted for the Indian PM was almost entirely vegetarian. The main course included roasted potato dumplings, chickpeas and okra. There was prawn, sure, but the special treat of the dinner was pumpkin pie tart.

So if you don’t want to miss a trick, what with all the vegetarian celebrations around, devour these new delicacies. Let the feast begin!