An unlikely fish from the Mekong Delta has overwhelmed Indian shopshelves and restaurant menus. Wonder why? 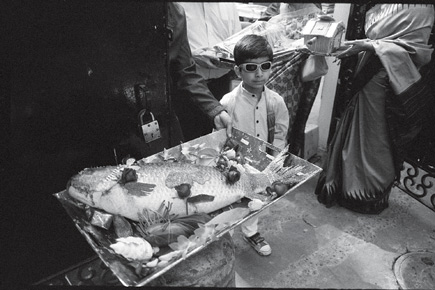 An unlikely fish from the Mekong Delta has overwhelmed Indian shopshelves and restaurant menus. Wonder why?


This could happen to you. You’re at brunch and you cut into some steamed fish, a fillet of white flesh that peeps out from a green-herb-cloud of basil and chives. You lift a forkful to your lips, and you’re mystified. The unfamiliarity has your senses rifling through all your flavour registers. The texture is too frail for it to be rawas. Its perfume is too subtle to be pomfret. Okay, it’s not from the sea. But it’s not singhara, sole or rohu-like either. This steamed being isn’t from any Indian river. The next forkful establishes it. This is an alien fillet.

What it is, is a lean and elegant sliver of basa, a freshwater catfish from Vietnam’s Mekong Delta that has been sneaking into Indian markets, kitchens and menus since 2008. It doesn’t swim to our coasts, it’s shipped frozen by the containerload. From the ports, basa migrates inland along a cold chain, heading as far north as Jammu.

While whole rawas and rohu fish stare at us in bazaars, awaiting examination from gill to pupil, basa arrives sliced up in enigmatic fillets to be sold bereft of all signs of freshness—a clear and beady eye, red gills and glistening silver skin that springs back when you poke at it. You just buy it on the trust of its use-by date.
Yet, this recently come-hither catfish is flying out of freezer cases at city supermarkets. “Basa’s blown the Delhi market, it’s knocked out the Calcutta bhetki, Indian sea bass and river sole,” declares Chef Vikram Khatri of ai, a contemporary Japanese eatery in Delhi. While that’s possible in a landlocked capital with just one foul-flowing river, basa has nosed even into our independent republics of seafood: Mumbai and Goa.

“Steamed or fried, basa is a weekend ritual for us,” says self-confessed fish freak Adarsh Hegde. Having spent his adolescent weekends listening to the bawdy banter in Baroda’s fish market, Hegde now pops into Mumbai’s Godrej Nature Bazaar to buy cleaned-cubed basa. On the other side of the coast, Bengalis, notoriously loath to buy a maachh without a smiling countenance, have made space on their thalis for these foreign fillets.

Why such deference to an unlikely émigré, when India has an 8,200 km coastline and an abundance of rivers and estuaries that shimmer with silver-skinned swimmers? Consider the cost. Basa retails for Rs 250 upwards for a kg of white fillets; that’s half the price of local heroes like rawas and pomfret.

At Blanco, a seafood eatery in Delhi frequented by Rahul Gandhi, restaurateur Sudha Kukreja says, “90 per cent of our seafood menu is basa.” Two years ago it was Indian river sole. Sales of this skeletonless creature are also spurred along by newbies and north Indians who’re terrified of a fish bone jabbing their throats.
But if basa’s been such an invader, how come no one is shouting about it? Its awkward name might have something to do with it. For all the tautologies we’re used to, a fishmonger hollering “taaza basa” (‘fresh stale’, that is, in Hindi) is likely to attract more glares than buyers.

Importers, though, are only too happy to up their basa volume. “We introduced it in November 2008, and we’re already selling a thousand tonnes a year,” says Yogesh Grover, director of Empire Foods. Grover moves consignments to 19 cities, to places as unlikely as butter-chickened Ludhiana and Ganga-garlanded Patna. “Exponential demand has cut prices by half within the past year,” says Grover.

It’s not just cost that has tipped the scales in favour of this Vietnamese genus. It’s a global fish for a globalising bazaar. The best of India’s catch is exported. Rather than rummage through seafood bins, our liberalised appetite has voted for choice over compromise. That’s opened our markets and mouths for a bite of basa. Sharing a distinguishing fact, Jason DeSouza, seafood-specialist and proprietor of Aquamarine, says: “There’s no fresh and frozen offering to beat basa in terms of value and quality.”

Like any adaptive Asian, this catfish slips into any culture curry. Lay it on a tawa and it crisps up with a masala crust, set it on a grill and it takes heat and lime-stoking. “Basa is the new salmon,” declares Madhu Krishnan, executive chef, ITC Royal Gardenia, Bangalore. “You can really elevate its flavours,” says this chef who’s even poached it in Champagne. At Pavilion, their café, basa with a rock oyster in a leek beurre blanc is “one of our most popular fish items”, says Krishnan.

Beyond the buzz lies the disturbing reality of empty oceans. “Worldwide, there is a white fish scarcity,” explains Grover. Basa is shoaling into that market vacuum. Vietnam, which took to aquaculturing this fish about 15 years ago, has flooded into the US and European Union. Perhaps because, when this unlikely émigré from Vietnam is dropped into a haze of golden batter, and given a shake of salt and vinegar, it takes on a crispy and believable Brit accent.

That’s a mighty long journey for a fish that’s never been a free swimmer. Cultivated in floating bamboo pens along the fast flowing waters of the lower Mekong, basa fingerlings are fed with fish, soy and wheat pellets. Up on the decks, aqua-farmers cook up pho soup for themselves, while waiting for this omnivorous fish to fatten.

Weighing about a kilo at five-six months, basa profitably plumps up at thrice the speed of farmed salmon. That’s when the farms float factorywards. Here, a thousand waiting workers process four container loads per shift. Basa then takes its first journey into the salty oceans, headed for India, Europe and the US. It’s exported with certifications for chefs and consumers who want to know what their fish ate before it became their food.

“Many of our customers are allergic to shrimp,” says Khatri, “I have to check the certificate to see if the basa was fed shrimp pellets.” He doesn’t have this luxury with other seafood. “When we were launching ai in 2008, we banged our heads, looking for hygienic fresh fish,” he says. Collaborating chefs from the Zuma, London, suggested this catfish. At ai, Grilled Tobanjan Basa is “the leader of our menu”, says Khatri. He plates up ten orders a day. Each time it’s taken off the menu, customers demand the return of basa spiked with yuzu fruit sauce.

While it can take to a frying pan, wok and oven, “Basa isn’t sturdy enough for a tandoor,” says Kukreja.  Nor can it stand up to tough Bengali scepticism. “I can’t tell if it is chicken or fish,” snorts Chef Sushanto Sengupta who stands over the kitchens of 6, Ballygunge Place, a traditional Bangla restaurant in Kolkata.
The commercial success of this fish has spawned imitators. Following the streak of the trout, salmon and tilapia, which were introduced to Indian waters, basa’s now swimming about in Andhra Pradesh ponds. “Due to poor water exchange or feed, the Indian product can’t match the quality from Vietnam—it’s too yellow and the fillets too ragged,” says a seafood expert. But given its business potential and local ingenuity, basa could become an FIO: Fish of Indian Origin.

We’re halfway there. In a tweak that might make puritanical Parsis faint, Chef Manish Mehrotra at the fusion-eatery Indian Accent in Delhi has been plating up Patrani Mekong Basa. Rather than pomfret in this Parsi delicacy, he parcels up a steamed nibble of green-chutneyed basa in a banana leaf. Kukreja predicts most Punjabi dhabas will convert this Vietnamese catfish into Amritsari machhi after sprinkling it with ajwain and spice. That’s the power of a price inflection. As for flavour, let’s watch basa’s fate in the Bengali bastions. We’ll only know once they give in to a mustard-laced shorshey-bata basa.