About a Child Gold Smuggler

As the price of gold hovers around record numbers, memories of another time when you, like Susan, were probably a gold smuggler. 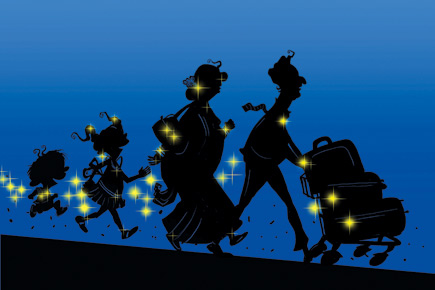 As gold prices hover around record numbers, memories of a time when you were probably a gold smuggler.


There was Haji Mastan, Karim Lala, Varadarajan Mudaliar, and Susan Alexander. Like the infamous legends of the Bombay underworld, Susan too was a child of her time and circumstances. You could say she simply did what she had to for her family. She was never caught, but it certainly wasn’t because she was any good, just lucky. “I smiled a lot. It was like a nervous tick,” says Susan, now a 31-year-old who makes a legit living in Mumbai. Susan grew up in Dubai. Back then, the desert port was the Mecca of well-made, reasonably-priced gold, while in India, people paid high rates for extremely poor quality stuff. Which is why Susan, just nine then, became a gold smuggler. Like many of you, if you care to admit to it.

The Indian Government banned import of gold in 1947 because the metal had a huge impact on money supply and inflation. The Government observed the ban so ferociously that passengers arriving from foreign countries underwent rigorous body checks at airports. Customs regulations allowed travellers to import personal jewellery, as long as the passenger was wearing it. Anything else was simply confiscated. But many Gulf-resident Indians found it difficult to ignore the profit potential of trading cheaper, high-grade Dubai gold in the high-priced Indian market.

There was uncontrollable smuggling, even a parallel underground economy in which gold was the preferred currency. According to the estimates of Madhusudan Daga, at 82 the country’s oldest and most respected gold analyst, between 1981 and 1990, approximately 200 tonnes of gold was illegally imported every year. At least some portion was trafficked by middle-class moms and dads with access to innocent, unsuspecting carriers: their children.

Through the 1970s and 1980s, some kids as young as eight literally felt the weight of their parents’ gold ambitions. Susan’s parents, like hundreds of migrants in the Gulf then, were law-abiding citizens, who conscientiously repatriated pay cheques, built up savings, only holidayed in the ‘native place’. But far too often, the mathematics in their lives didn’t add up. Salaries didn’t always match efforts, and they knew they would only be living the Gulf dream for a short while. Suffice to say, it seemed imperative that they made the most of it. To them, smuggling tiny amounts of gold to gift relatives, pay off costs of the vacation, or a sibling’s wedding, didn’t seem like a crime. “People knew it was wrong but they had needs that had to be taken care of,” says Alexander Mathai, Susan’s father.

Susan’s family had an annual routine. Just before the summer vacation season between end June and September, they would use a portion of their year’s savings to buy one or two large ornaments, say a ‘link’ or ‘rope’ chain (so called because they had simplistic link and rope patterns), small gold biscuits or coins. “The aim was to buy a single piece of about 50 gm or so, easy to conceal and light enough to carry. My brother and I usually had a heavy piece around our necks or across the hip as a navel chain,” says Susan.

If Indians are the world’s largest consumers of gold, it’s because of the Malayalee. Even today, the state of Kerala consumes more gold than any other in this country. In the Alexander household, Susan’s mother, Alice, always wore six bangles on her left arm, a taali chain that was never less than 20 gm, and other jewellery. One of Susan’s regular chores required her to make a weekly call to the family’s favourite jewellery store to check the rate of 1 gm of 22 carat gold.

The Alexander family’s final destination was Trivandrum. Before Trivandrum got an international airport, they first deplaned in Bombay, and caught a connecting flight. “Stay away from the uncle in the white uniform,” Susan still remembers her mother’s words. A life-long pessimist, all of Susan’s childhood nightmares almost exclusively involved a catastrophe involving her parents. She hardly ever allowed them to go anywhere without her. (On the rare occasion when she was left alone under the care of her brother—five years older—Susan was convinced something horrible would befall her folks. And, like Joseph in the Bible, she’d also be sold off to a caravan of traders.) So it is with no little trepidation that Susan undertook the responsibility of getting her parents’ gold through Indian Customs. She believed with great conviction that if she did not play her part correctly, her parents would end up in jail.

Children made brilliant conduits because they were largely left unchecked. There weren’t proper X-ray machines back then, and Indian Customs officials usually focused on adults, especially women who concealed gold ornaments in the folds of their saris. So, all kids had to do was simply go undetected. “My brother and I would wander off away from my parents, and go stare at other people or play, anything to avoid being near our parents while they were being checked,” says Susan. Her nightmares almost came true one year. She was fiddling with a chain under her T-shirt when the hook came undone. Luckily it caught in the elastic of her skirt and stayed there till the family left the airport.

Passengers caught with excess gold had two options: let the booty be confiscated, or negotiate a bribe. “Of course, Customs officers knew what was going on (and had their rates), but they were careful because if a Customs officer was caught with money by enforcement officials then they would be in serious trouble,” says Mathai. After settling on a percentage bribe, the money would be paid to a porter, maintenance worker or taxi driver working in cahoots with Customs officials, who would receive the money only outside airport grounds. “They never accepted the cash directly,” says Mathai. “The Bombay officials were better, and asked for less money. The Trivandrum officers would simply take anything, even soap.”

Susan estimates that for about four years starting from when she was nine, she must have smuggled in about 150 gm of gold. Her father, who’s never smoked, once took a gold biscuit hidden in an empty cigarette box in his shirt pocket; enforcement officials outside the Trivandrum airport caught an acquaintance of the family with a biscuit in his shoe; her cook Sebastian smuggled gold chains into India by hiding it inside a tin of milk powder. Professional smugglers even worked gold into the mechanism of refrigerators and televisions.

In 1987, the average price of 10 gm of gold was Rs 2,570 in India, while in the international market, the average that year was just Rs 1,860.5 for 10 gm. So, for every Rs 100 worth of gold a person bought in, he made Rs 38 profit just on cost, and got a premium on the superior quality of the illegal gold. So, smuggling was lucrative, especially for the hardworking middle class. Also, as Kumar Jain, vice-president of Mumbai’s Jewellers’ Association, says, “In the domestic market, the only gold that was available was old recycled gold. So, many jewellers bought expensive illegally-imported gold back then.”

At the heart of the middle class gold smuggling phenomenon was India’s insatiable demand for the metal. Historian Sharada Dwivedi, who’s done extensive research on jewellery traditions in India, says part of the reason for our gold obsession is our distrust of banks. “A long time ago, I interviewed a rich family in Porbander who made their money from milk products. They said they’d converted all their notes into silver rupees and it was buried at a particular place only they knew,” says Dwivedi. For a woman, it was always a form of insurance because gold was the only portion of the dowry that was really hers; in mythology, the gods wore gold. “Gold is in our blood,” says analyst Daga.

In 1992, after the economy was liberalised, the Gold Control Act, which was enacted in 1962, was abolished. Last year, the Reserve Bank of India bought 200 tonnes of gold from the International Monetary Fund for about $7 billion, increasing India’s gold reserves to more than 550 tonnes. Today, as 10 gm of gold costs over Rs 10,000, Indians still consume about 800 tonnes every year, and less than 1 per cent is brought in illegally. Susan still visits Dubai, but she doesn’t smile nervously at Customs officers anymore.