Kodaikanal and the enlivening languid pace of hill stations 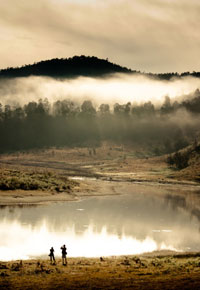 The first time I ever saw snow, we had decided to drive up to the mountains at 4 in the morning—a decision made after a late night, following which six of us packed up and drove off to Mussoorie. Enacting a snowfight, visiting Woodstock School in Landour, shopping alongside the laidback locals, walking about our echoey hotel—the hours passed and still, we had done nothing. Here was the quintessential hill station experience. You may have to be in college, as we were, to have that kind of time to spare, but a visit to any of these small towns in the mountains can offer the sensation of slower time at any point.

Why did we continue that very British legacy of hill stations? They offer the urban Indian one of the few respites from chaos and crowds, are a sanatorium and a luxury of time. The ultimate anti-city, a hill station is by definition the slower conduit to getting things done, perhaps most obviously in Dalhousie, the quietest and least eventful one you might encounter; and least obviously in Shimla, that bustling beehive of a mountain abode. Its locals and local experiences are that much closer at hand, if you choose.

I grew up in one of the most pristine of hill stations, a town of affable early-risers who often stymied my efforts at late nights with plans for sunrise cycling around the lake. Kodaikanal, India’s only American hill station (the presence of pioneering American missions is tangible here), literally means ‘gift of the forest’ in Tamil. Established in 1845 as a colonial-era refuge from the heat and disease of the plains, Kodai, as it is known by its familiars, sits more than 2,000 metres above the flatlands in the Western Ghats’ Palani Hills, in Tamil Nadu. My family moved there in the 80s, following in the footsteps of my grandfather, who had taken the first elephants up. Like most hill stations, Kodai was a little crucible of resistance to the mainstream: people with alternative (no ironic quotes) lifestyles flourished here.

Amenities are less available, there are less shops and no multiplexes. Instead, you find other sources of entertainment and goods to buy; a store full of ecologically sound options, Eco Nut, stocks everything from aloe vera to honey derived from the rare Kurunji flower (which blossoms only once every 12 years). Locally-produced Kodai Cheese, established in 1973, supplies everything from chilli cheddar to a killer brie, nationally renowned for its tastefulness.

The local Sunday market is full of fresh produce, held on one of the main drags of Seven Roads (Kodai’s central crossroads, one of which leads into Kodaikanal International School), and a farmers’ market is held nearby every Saturday. Here, infotech consultants-turned-farmers serve up organic broccoli grown with their own hands, alongside a display of local handicrafts; and a Canadian bagel-maker, George Penner, presides over a bread-filled table. His wife Vera is a talented local artist whose studio lies by the oven at home, by which you might have occasioned a bison they took to calling Biff, a year or so ago. This is the kind of person Kodai is famous for, who you will be lucky to meet and, unlike in noisier places, will probably make the time and space to tell you all about their exploits.

Everyone has an opinion and space to air it in Kodai. Take the members of the Kodaikanal Fellowship-KMU Library, a casual, generous-minded book club of sorts. Twice a week (Wednesdays and Saturdays), venerable readers meet to discuss literature and life, and visitors are welcome. “In this club you can’t sit quietly in a chair and read, you have to make time to talk,” one of the late members, Shanti Raghavan, told my mother when she joined, 25 years ago.

Café Cariappa, a high-end coffee shop serving authentic espressos brewed with local coffee, is a popular hangout, as is Cloud Street, a restaurant with a wood-fired pizza oven and an intermittent weekend music scene. Also Pastry Corner (or Daily Bread), where Israeli visitors and Tamil matriarchs jostle for fresh cream cake—even monkeys; one regularly arrives for his cream bun. Here, you will meet Pandiyan, the beaming shop attendant who divides up delicious egg puffs and adds in a sample taster of cake, and the shop-owner, Prasanna Ghosh, given to lavishing free treats on customers.

If you are lucky, you might bump into Minoo Avari, a friendly Parsi gentleman who campaigns untiringly against noise pollution, one of the evils Kodai faces today; or Adam Khan, a charming local artist who has not left Kodai for decades. And writers like Cyrus Mistry and Zai Whitaker have also made the princess of hill stations their home.

You can spend the weekend hiking, visiting many of the town’s beautiful locations, whose names often tell a story: Dolphin’s Nose, Priest’s Walk, Cloudlands Peak. Climb seven mountains and return to your hotel, in one day (Perumal Malai), or visit the three giant rock pillars which form Pillar Rocks, that spectacular viewpoint; explore Dolmen Circle, whose dolmens (made up of two large, standing stone slabs capped by a larger, flat slab) are rare prehistoric remains, or play a round of golf at the renowned local course (paying a minimal non-member green fee). Try camping in Poondi or Berijam, nearby camping sites with lakes (permits are required); or visit eco resort Elephant Valley, 20 km away, located on an elephant migration path, and with an organic farm and coffee packaging unit.

Made up of eucalyptus, acacia, cypress and, most wonderfully, ecologically rich shola trees, Kodai’s forests are a bounty for visitors—and not just those looking for the magic mushrooms this town is allegedly notorious for. Vijay Kumar of Nature Trails, a pleasant guide and conservationist who has walked these woods for 30 years, is the ideal companion. Adapting to the pace of both the veteran hiker and the rookie climber, Vijay offers a gentle introduction to the wild as well as the chance to bump into a bison, that largest of bovine species—up to seven feet tall and 1,000 kg of swift, formidable strength, but worth seeing at a safedistance (and unlikely to bother you unless you bother it first).

Stay with the locals too, if you can, in Kodai. A bed and breakfast like Cinnabar, home of the Balakrishnans, offers a cheese-making course and wonderful international food. At Neville’s Karuna Farm, a distance from the town proper, you can spend the night in proper isolation, or try Red Lynch Heritage Stay, an old country home which can be booked by a group. And at Bodhi Zendo, a Zen training centre, spend the entire night and day in complete silence.

Kodai is one of the few quiet beauties which has held out, for hill stations now face the biggest challenge of them all: survival. It is unique in that it had managed to avoid the traps of over-building, to some extent, and locals have managed some degree of conservation by effecting a ban on plastic. Yet, even this town is overwhelmed with tourists every summer, particularly in May, when water runs out and has to be bought in tankers, the roads are clogged with unaccustomed traffic, the streets littered with the detritus of thoughtless tourism. It is up to travellers, lingering and fleeting both, to save this experience by being ecologically conscious travellers—and perhaps up to the authorities to control numbers.

Dharamshala, Mussoorie, Manali, Ooty, Ranikhet and Sonapani are some of the other delightful hill stations you might want to consider visiting, offering variety within the range of slow time, depending on where you are located.

Manali is large and spread-out, its vistas broader and offering options between semi-swish new hangouts and Old Manali, which has wonderful baked goods and excellent Korean food to offer (The Lazy Dog, Old Manali). Shillong, that rockstar of the mountains, offers some of the most invigorating concerts alongside your daily walks, erupting into music at festivals, underground bars and private parties, in a cosy expansion of hill station life. Dharamshala is wonderfully coloured with the presence of the Tibetan government-in-exile; within it, the more remote Dharamkot and Triund afford the most peace.

It is sometimes in search of peace that visitors return to hill stations like Kodaikanal, over and over again, sometimes in search of lost time. Even us old-timers; on my last visit, I tripped home after a wedding reception that had turned into a gathering of old friends, just before dawn—only to surprise a wild boar at our gate, that other late-night party animal of the mountains. Morning was here, again.