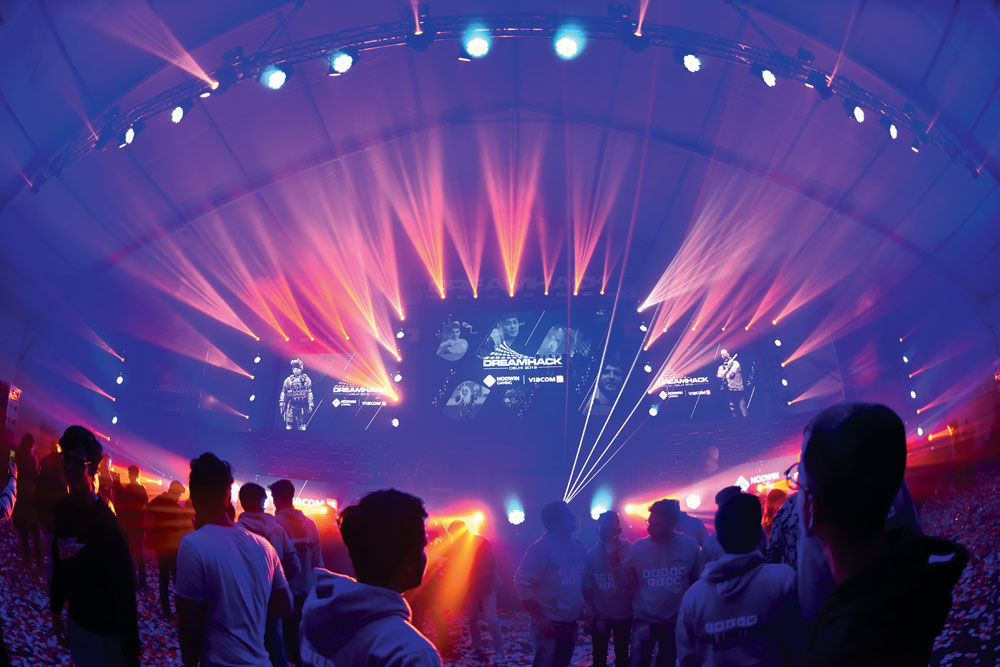 
THE TERRORISTS PLANT the bomb. One among them, wayLander, chucks a smoke grenade and runs off. He hides behind a staircase and takes out his last remaining rival with an impeccable shot to the temple, getting the ‘frag’. A crowd claps and cheers at the audacity of the move. The commentators, thus far dispassionately holding forth on Sun Tzuian warfare tactics, let out a quick yelp. Pro100 win again.

We’re at DreamHack Delhi, one of the world’s biggest international gaming festivals, organised by gaming and e-sports company NODWIN. “Earlier, you’d have your mom-dad scolding you, ‘What are you doing?!’ That doesn’t happen anymore. There’s money, there’s fame, all of it,” one young contestant tells me. “It’s like another entertainment factory.”

It truly is. Three big stages, hosting different competitions across platforms and devices— CS:GO, PUBG, PUBG Mobile, Tekken—and lots of brands vying for visibility. The whole place is packed to the rafters with young boys and men.A huge white guitar with complicated-looking devices resting inside it stands on one of the tables. A glass panel on the front, where the guitar body should be, displays the dizzying strobe lights inside changing colour at whim. It has been designed by Jay Kapoor, a DIY artist who runs a PC modding startup called MakeMyRig. This section displays a bunch of ‘modded’ PCs as part of a competition—computers that have been jazzed up and pimped out. Kapoor custom-fitted the PC inside the instrument while trying to maintain the aesthetic quality of the guitar. Further, he rigged it in a way that if you strum the guitar or pick one of the strings, the PC will shut down/start.

One Tekken battle, featuring a player named Sunny and another named, simply, ‘LOSER’, catches the fancy of the commentators—their partisan bleatings and intermittent screeches thicken the air with tension. After losing the first round, Sunny makes a comeback to win the next two, followed by a triumphant fist pump directed at the lively audience.

Many are lugging around giant suitcases—the events include Bring Your Own Console (BYOC) and Bring Your Own Device (BYOD) competitions with money and bragging rights at stake. Blake Merriam, another member of the suitcase-brigade, actually has luggage in his bag, not a console. A game developer based in San Franciso, Merriam was visiting the country for India Joy, a digital entertainment festival held recently in Hyderabad. He has to fly back in a few hours, but he thought he’d spend some time at DreamHack. “I’ve always been keen on it [gaming in India] and seeing how it’ll grow. It is unique in its own way compared to game cultures in other parts of the world.”

WITH MUCH enthusiasm, Merriam tells me how the industry is growing in India. While gamers everywhere tend to stick to their own regions, he mentions how developers are taking notice of India. “Particularly in the mobile space. Here you’ll see a lot more PUBG and the likes, and anybody who’s doing anything in the mobile gaming space is really keen on how to get more involved in the gaming scene here.” A prestigious amateur e-sports league from the US looking to expand its global reach, he tells me, will enter India this year. Merriam also runs a scholarship where he helps 15 selected Indian developers attend the Game Developers Conference (GDC) in San Francisco each year—an opportunity for developers to discuss tools of the trade. “Whether it’s Fortnite or PUBG or anything, the developers discuss industry stuff. It’s about sharing best practices,” he says.

E-sports, or electronic sports, is competitive video-gaming, where individuals or teams play against each other, most often first-person shooter games (CS:GO) or battle arena games (such as Dota or the wildly popular Player Unknown’s Battlegrounds, aka PUBG). These are spectator sports, and they’ve gained traction over the past 15 years internationally—millions of people stream these matches live. While YouTube is, like with everything else, essential to the growth, another platform that has helped e-sports become popular for viewers is Twitch, a live streaming service for games and competitions. 2019 was the second DreamHack to be held in India, live-streamed by Viacom18 on VOOT; Mumbai hosted the first one in 2018, and 2020 will see the festival landing in Hyderabad.

In India, the last few years have seen a monumental rise in the gaming community, attributable to mobile gaming, made accessible thanks to plummeting phone and internet rates (the latter of which may not last for much longer). A report by KPMG with the Indian Federation of Sports Gaming (IFSG) projects that the revenue in online gaming is expected to go, from Rs 20.3 billion in 2014, to Rs 118.8 billion in 2023, with mobile gaming forming 89 per cent of the share. The number of gamers in India has jumped tenfold as well, from 20 million in 2010 to 250 million in 2018.

Even in the world of e-sports, which features more competitive and dedicated gamers, there is an industry developing alongside the community. The report projects that viewership figures in India will rise from four million in 2017 to 20 million in 2021. Organisations sign promising young players, and pay them to compete and train; some of the prominent names include Global Esports, Entity, and U Mumba.

The only Indian team in the CS:GO competition was Orgless5. Orgless5 has been one of India’s best teams, despite the absence of corporate sponsorship. Now they’re about to disband, and each of the five has signed with organisations and joined new teams. Their name, too, alludes to how they’ve existed without the support of any organisation.

Sabyasachi Bose, 23, and Vishal Sharma, 26, are two members of Orgless5. Bose goes by ‘antidote’; Sharma’s pseudonym is ‘haiVaaN’. They’ve been playing for many years, casually and then competitively, and have, as part of Orgless5, represented India at international events, including in Shanghai.

“Once you’re signed to an organisation,” says Sharma, “It’s a full-time profession. It’s a job.” They’re given a monthly salary—“All I can say is that it’s enough for you and your girlfriend!” laughs Bose—and the prize money is split depending on the terms of the contract. Sharma says the training and practice methods are the same as with any other sport, dispelling the persistent myth that video games breed and nurture sloth and lethargy, and associated outdated stereotypes: the sweaty loner, the misfit, the uppity nerd.

“There has to be discipline if you’re playing for a top organisation, both in-game and outside,” says Sharma. “No one will hire you otherwise. It can be up to 14-15 hours a day sometimes. You wake up at eight, get into the gym, train there. It helps a lot, in terms of reaction time or when you’re sitting at LAN events for long periods of time. People still don’t understand that; they think it’s an e-sport so you just have to sit and play. You have to eat healthy, you have to be fit, it affects your mind.”

Gamers are particular about their gear—carrying their own keyboards and mice—with the slightest deviation affecting performance. It’s not just the equipment; an entire process exists to optimise performance. Bose mentions how even the height of your chair can have a significant impact.

There’s a meticulous process of dedicated self-improvement that they practise. “There are some training processes such as ‘death-matching’. Or demo reviews, where you record the match you play and watch it later to identify your mistakes, write them down, do theory work around it,” says Bose. “Play against players who’re better than you so you can match their level. You have to be disciplined and learn something every day.” There’s an in-game captain appointed to each team, and teams also have coaches who help them formulate strategies and work together in multiplayer team games. Sharma says that the e-sports culture in India is still developing and not at par with Europe or the US or other Asian countries, though they’re both pleasantly surprised by how quick the progress has been, especially given that most established gaming centres have a headstart of 10 years over India.

Gaming, it appears, belongs to the youngest of the trending generations, generation Z, of the 18-25 range. For every five or six men, I spot one woman at DreamHack, roughly consistent with the international viewership ratio: 85-15. My attempts to speak with, or even spot, a female gamer competing here yield no fruit. (Internationally, the gaming community has been plagued by issues of sexism, the most prominent incident being the Gamergate controversy.)

The ratio improves when it comes to cosplaying—where you dress up like and mimic physical traits of characters from games—another feature here. Three well-known cosplayers—Corra Berry, Alycesca, and Yamaki—judge the daily competitions, with the winners pocketing half a lakh rupees. Sampad Bannerjee, 22, has come down all the way from Kolkata for this. He stumbled upon cosplaying in 2014, and his interest in the form deepened a couple of years later, once he entered college. He’s dressed as NCR Ranger (no relation to New Delhi), a character from Fallout: New Vegas, an RPG game he enjoys. “This isn’t PUBG or Star Wars!” he insists, perhaps a hint of protest in his voice at how PUBG has become such a mainstream phenomenon. His outfit, from the helmet to the armour, has been put together by him alone, for which he spent Rs 3,500.

He tells me how the cosplaying scene in Kolkata has been growing over the past three years, with a clutch of regular cosplayers supported by organisers and brands. They generally end up doing a couple of events a year, usually in conjunction with another event—he tells me of a Japan-themed event where they cosplayed as anime characters — though, unlike several other elements of game culture, cosplaying is strictly restricted to a hobbyist activity for now, with not enough of a scene for it to become a legitimate career choice. Bannerjee, who has been playing video games since he was four and is involved in Kolkata’s gaming community, is also looking forward to improving his Tekken chops by taking part in the scheduled competition.“We have this good scene now, it’s grown a lot. It’s becoming more mainstream, and with the introduction of games like PUBG Mobile, the money is also coming in,” he says. “The kids who used to bully me back in school for playing video games, they are playing PUBG Mobile now. So yeah, who’s having the last laugh!”