Why did Kanu Sanyal, the very first Naxalite, take his own life? Ill health? Despair? Or was he making a final statement? The most profound of all. 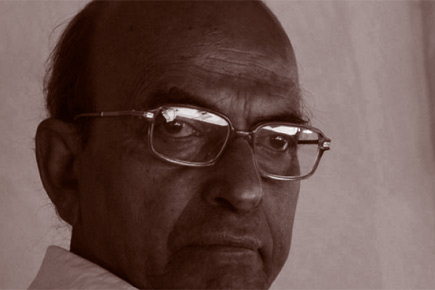 Why did Kanu Sanyal, the very first Naxalite, take his own life? Ill health? Despair? Or was he making a final statement?


Is it just a coincidence that Kanu Sanyal committed suicide on the date that Bhagat Singh was executed? We will never know. He did not leave a suicide note.

Kanu Sanyal, along with Charu Majumdar, founded the Naxalite movement in the 1960s. In 1967, he led the armed peasants’ movement in Naxalbari in north Bengal. He was literally the first Naxalite. I met him in 2001 at his austere home outside Naxalbari, and I can honestly say I have never met a more courteous and simple man. What impressed me most was his ability to examine and reconsider decisions and beliefs, even admit mistakes. “The peasants’ uprising was a true armed mass struggle,” he told me. “But after that, the whole movement took a terroristic path. It was like we were building a small earthen hut, and we just kicked it back to dust again.”

On 18 March 1967, Naxalbari’s Peasants’ Council announced it was ready for armed revolt to redistribute all land controlled by landlords, and end centuries of barbarous exploitation. On 23 May, sharecropper Bigul Kisan entered a patch of land with his plough and ox and was beaten up. The next day, Inspector Sonam Wangdi led in a police posse. He died in a rain of arrows.

The day after, there was a peasant meeting; 11 people died in police firing, including seven women and two children. But by this time, the dream of a Maoist revolution of peasants and workers had spread far beyond this one hamlet. An anonymous poet wrote on the walls of Calcutta: ‘Amar bari, tomar bari/ Naxalbari Naxalbari’ (My home, Naxalbari/ Your home, Naxalbari), and the violent movement sweeping Bengal had acquired a name.

In the months after the firing, angry peasants attacked and killed landlords, forcibly occupying land. They were led by men like Sanyal. Brutal police operations crushed the revolt by late 1968. But the movement had already spread across Bengal. Sanyal was arrested in August 1970, and spent seven years in jail. “Our movement failed because you can’t liberate a country by killing individuals,” Sanyal told me. “You kill a landlord, his son will come. I don’t think you become a true communist by killing a traffic policeman.”

Sanyal spent his last years fighting for the rights of tea garden workers in the area. Most estates are owned by Kolkata-based fat cats who suck out every paisa they can without investing a penny. Labour rights exist only on paper. Minimum wages are not paid. Provident funds are fictional. It is common practice to sack workers before they complete five years on an estate, lest they be eligible for gratuity. Under the law, tea workers get cheap rations. When I was there, plantation owners had unilaterally changed the rules so that if a worker was absent for a single day, he had to pay 345 per cent more for his rations. If absent for three days, he paid 1,037 per cent more, and six days, 2,074 per cent. “Revolution is not instant coffee. It may come in two years,” Sanyal said, “It may come in 30. It may spread like Prairie fire, it may be a slow process. Meanwhile, there is so much to do.”

He thought the current Maoist movement’s methods were all wrong and would end up hurting the people it was trying to empower. Maoist leaders thought Sanyal had sold out. “He is a pheriwala, a hawker,” Maoist leader Kishenji told my colleague Rahul, “He is in the pay of the CPM.” I met the man. I cannot believe that is true. “We have bought the union leaders from all parties,” the manager of a tea estate in the area told me. “But when I offered 5 kg of our best tea to Kanubabu, he said, ‘Tell me where your tea’s available, and I’ll go buy it’.”

Why did he kill himself? The official reason being cited is ill health. Or was it despair?

I do not believe Kanu Sanyal would kill himself out of despair. I would like to think his death is a statement, and the most profound one this extraordinary man ever made.

And I can only hope I am right.